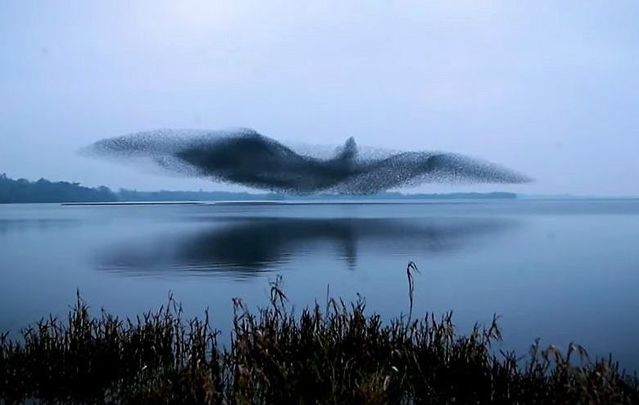 Friends James Crombie and Colin Hogg managed to capture the magical moment that a murmuration of starlings over Lough Ennell near Mullingar, County Westmeath, took on the shape of a massive bird, back in March 2021.

Murmurations are a phenomenon when hundreds to thousands of starlings can be observed flying in intricately coordinated patterns.

After months of failed attempts, pals James Crombie and Colin Hogg captured a perfect picture of the magical event over Lough Ennell in County Westmeath.

In a video shared on YouTube by Hogg, Crombie can be heard exclaiming "that looked like a bird," as tens of thousands of starlings swooped over the water:

Crombie, who was named press photographer of the year at the 2021 Press Photographers Association of Ireland awards, tweeted that he and Hogg had spent "an amazing few months chasing the murmurations and our patience eventually paid off."

What an amazing few months it has been chasing the murmurations around Lough Ennell looking for the shot with @hogg82, our patience eventually paid off. Thanks so much to the @IrishTimes for the wonderful usage today pic.twitter.com/5ldPF6J6PS

Crombie told The Irish Times that his pal Hogg, who lives near Lough Ennell, mentioned last year that the starlings would make for a great picture.

"They nest in the reeds around the lake, and they move every four or five days, towards sunset," Crombie said, "and when they move they make shapes.”

The picture, however, required a great deal of patience. Speaking with The Irish Examiner, Crombie said: "I kept failing. I kept missing them. They’d be in another part of the lake, or it would be raining or it would be foggy.

“We went nearly 50 times and I kept persisting saying ‘no, I’m going again.'

“I’d be in Galway working [as a press photographer] and I’d drive back down to the lake just as [the murmuration] was finished.

"I kept hammering away at it and eventually, we got it. I never expected the shot to be so perfect."

Hogg, himself an amateur photographer who works in the geophysics section at the Dublin Institute for Advanced Studies, told RTÉ that it was "a wonderful sight, so close to home."