US commitment to Northern Ireland "as strong as ever," Special Envoy Kennedy says 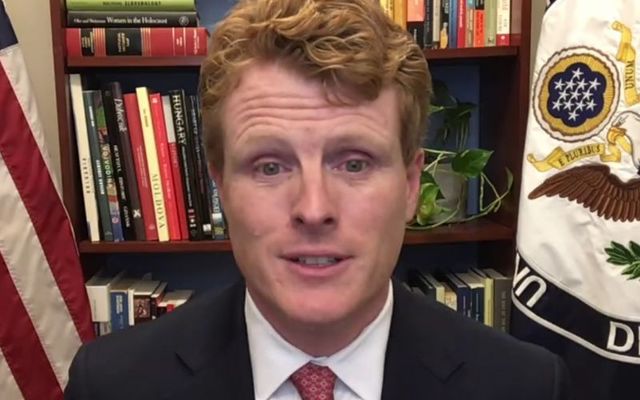 Joe Kennedy III gives his first statement since being appointed as the new US Special Envoy to Northern Ireland. @USEnvoyNI, Twitter

Joe Kennedy III, who was recently appointed as the new US Special Envoy to Northern Ireland, has shared his first remarks since coming into the role.

Kennedy said he is “honored” to serve as the US Special Envoy to Northern Ireland for economic affairs in a video shared on his social media on January 17.

“My appointment as Envoy comes at an important milestone in our shared history as we approach the 25th anniversary of the Belfast / Good Friday Agreement," Kennedy said.

“We can reflect on how political progress has provided the necessary conditions for economic prosperity.

“Since 1998, Northern Ireland’s growth and foreign direct investment has been remarkable. Improved political conditions have allowed our two-way trade to flourish.

“Now, we must continue the work to create opportunities for all in our future."

Kennedy continued: “The United States’ commitment to a secure and prosperous Northern Ireland remains as strong as ever.

“I firmly believe that the next 25 years will be a time of even more growth and prosperity.

“Our goals are simple. We’ll capitalize on opportunities that deepen trade and investment between the United States and Northern Ireland.

“We’ll work to strengthen the people-to-people ties that have been fostered over so many years, and we’ll champion together Northern Ireland’s compelling potential as a place to visit, a place to study, and a place to do business.

“During my first weeks in this role, I’ve spoken to a range of leaders, experts, and citizens who have a stake in Northern Ireland’s economic future. I look forward to continuing these discussions.

“I am thrilled, honored, and humbled to be part of our shared history to take on this exciting opportunity.”

The U.S. commitment to a secure and prosperous Northern Ireland remains as strong as ever, and I firmly believe that the next 25 years will be a time of even more growth and prosperity. Thrilled to share my goals for this new role. pic.twitter.com/MaOfR0JAoY

Later, on January 19, Kennedy said that he had spoken with US Secretary of State Anthony Blinken about his new role.

Last week I spoke with @SecBlinken about my new role as Special Envoy to Northern Ireland for Economic Affairs. We discussed how this opportunity will deepen trade and investment and strengthen people-to-people ties between the United States and Northern Ireland. pic.twitter.com/mwIlMRChQe

In the US Department of State’s formal announcement of Joe Kennedy III as US Special Envoy to Northern Ireland, Blinken said that Kennedy "will draw from his extensive experience to support economic growth in Northern Ireland and to deepen US engagement with all communities

“I look forward to Joe’s engagement and service with the people and leaders of Northern Ireland.”

Kennedy is reportedly set to visit Northern Ireland in February, while speculation is mounting that President Biden could be visiting in April to mark the anniversary of the Good Friday Agreement.