Joe Kennedy III said it is an "incredible honor" to have been named the new US Special Envoy to Northern Ireland. 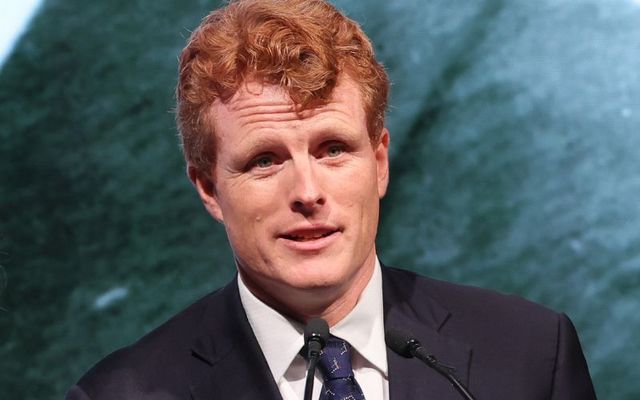 Joe Kennedy III will be the new US Special Envoy to Northern Ireland, US Secretary of State Anthony Blinken confirmed today, December 19.

“Today we are announcing the appointment of Joe Kennedy III as the US Special Envoy to Northern Ireland for Economic Affairs,” Blinken said on Monday.

“In this capacity, he will focus on advancing economic development and investment opportunities in Northern Ireland to the benefit of all communities as well as strengthening people-to-people ties between the United States and Northern Ireland.

"His role builds on the long-standing US commitment to supporting peace, prosperity, and stability in Northern Ireland and the peace dividends of the Belfast/Good Friday Agreement.

“Joe has dedicated his career to public service, including eight years in the US House of Representatives, tenure as Massachusetts Assistant District Attorney, and service as a Peace Corps Volunteer. He will draw from his extensive experience to support economic growth in Northern Ireland and to deepen US engagement with all communities.

“I look forward to Joe’s engagement and service with the people and leaders of Northern Ireland.”

Kennedy said on Monday that it is an “incredible honor” to have been appointed:

An incredible honor to be appointed Special Envoy to Northern Ireland for Economic Affairs.

Look fwd to working with the Biden Admin to reaffirm US commitment to Northern Ireland and to promote economic prosperity and opportunity for all its people.https://t.co/cz6urZ0g2T

The former Congressman said he is looking forward to working with Northern Ireland Secretary of  State Chris Heaton-Harris, who said "the UK Government shares & welcomes the US’ commitment to continuing to develop the potential & prosperity of NI."

Appreciate it, sir. Look forward to working together in the months ahead. https://t.co/2ESfQc3vnO

Kennedy also said that he looks forward to working with US Ambassador to Ireland Claire Cronin, who extended her congratulations to her "good friend:"

Look forward to our work together, Ambassador! https://t.co/WjpvTUflx1

Micheál Martin, who shifted out of his role as Taoiseach and into his position of Tanaiste and Minister for Foreign Affairs on December 17, welcomed the appointment.

“I want to thank President Biden and his Administration for this appointment,” Martin said. “It is a clear demonstration of the President’s direct engagement with Ireland as well as the enduring US commitment to supporting peace in, and building the prosperity of, Northern Ireland.

“Special Envoy Kennedy’s appointment comes as we prepare to mark the 25th anniversary of the Good Friday Agreement, an opportunity to look forward in the spirit of 10 April 1998 – with hopefully progress between the UK and EU feeding into new optimism.

“I look forward to working with Special Envoy Kennedy as he helps ensure everyone in Northern Ireland realise their full potential, best achieved through sustained investment in stability, in prosperity, and in the futures of the next generation of young people in Northern Ireland."

Michelle O’Neill, the vice president of Sinn Féin, welcomed the appointment, noting that the US remains "a critical partner for peace."

I welcome the appointment on Joe Kennedy as US Special Envoy by President Biden. The US remains a critical partner for peace. This appointment puts renewed focus on economic development & prosperity. People want politics to work, our economy to grow & opportunities for our youth

Monday’s announcement comes ten days after IrishCentral exclusively reported that Kennedy was the clear favorite to be appointed to the role.

The role of US Special Envoy to Northern Ireland had been vacant since Mick Mulvaney resigned on January 7, 2021. Ever since, Irish American leaders had been urging Biden to fill the role.

Kennedy, the grandson of Robert F. Kennedy, served as US Representative for Massachusetts's 4th congressional district from 2013 to 2021. He was considered a rising star in Congress, even giving the State of the Union rebuttal speech in 2018, but made an ill-fated decision to challenge incumbent Senator Ed Markey who defeated him handily in 2020.

Following the defeat, Kennedy signed up as a commentator for CNN but never ruled out a return to politics. This year, he was in Ireland to speak at the Kennedy Summer School in New Ross, Co Wexford.