Mick Mulvaney is among the Trump Administration staffers to resign in the wake of the pro-Trump riots at the US Capitol. 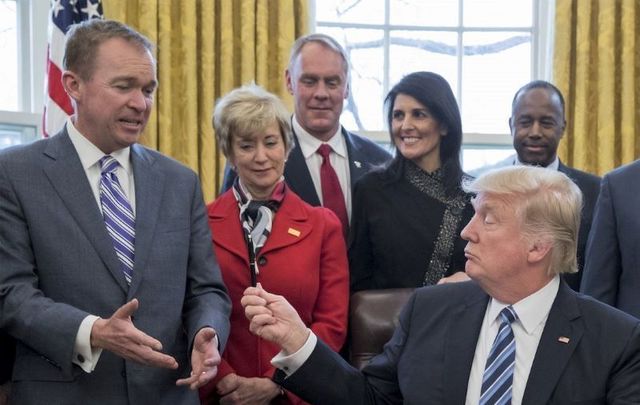 March 17, 2017: Mick Mulvaney, then the Director of the Office of Management and Budget (OMB), and President Donald Trump in the Oval Office. Getty Images

Special Envoy to Northern Ireland Mick Mulvaney has resigned from his post following Wednesday's riots at Capitol Hill, claiming that "he can't stay".

"I called Mike Pompeo last night to let him know I was resigning from that. I can’t do it. I can’t stay," Mulvaney told CNBC.

A number of staff members within the Trump Administration, including Deputy Press Secretary Sarah Matthews, have resigned from their posts in the wake of Wednesday's Capitol riots and Mulvaney told CNBC that any staff member that chooses to remain is doing so out of fear.

"Those who choose to stay, and I have talked with some of them, are choosing to stay because they're worried the president might put someone worse in," he told the network, although he hinted that more Trump staff may resign.

Mulvaney publicly condemned Wednesday's riots, calling on Donald Trump to do more to put a stop to them, with his first tweet coming at 2:31 pm EST as pro-Trump rioters entered the Capitol building.

Peaceful protests are one thing. Illegally storming the Capitol is another thing entirely. The President needs to discourage any violence immediately.

Now is the time for the President to be presidential.

About a half hour later, at 3:01 pm EST, Mulvaney said Trump's tweets in response to the events "weren't enough."

The President's tweet is not enough. He can stop this now and needs to do exactly that. Tell these folks to go home.

About an hour after that, at 4:07 pm EST, Mulvaney called upon Trump to address the nation.

The best thing @realdonaldtrump could do right now is to address the nation from the Oval Office and condemn the riots. A peaceful transition of power is essential to the country and needs to take place on 1/20.

Mulvaney's tweet was published just one minute after President-elect Joe Biden began a live address urging Trump to go on national television and call for a stop to the violence.

Less than ten minutes after Biden's live address began, a recorded video was shared on President Trump's Twitter in which Trump said: "This was a fraudulent election, but we can't play into the hands of these people. We have to have peace. So go home, we love you, you're very special." Trump's video was blocked by Twitter, who has now locked the President out of his account, later in the day.

As news of Mulvaney's resignation emerged on Thursday, he tweeted:

"We didn't sign up for what you saw yesterday...We signed up for making America great again, we signed up for lower taxes, less regulation, economic opportunity. The president has a long list of successes that we can all be proud of. But all of that went away yesterday....'"

Mulvaney was only replaced as Trump's Chief of Staff in March and immediately took up the role of Special Envoy to Northern Ireland, a role that had been unfilled since Donald Trump took office in 2017.

Just two months ago, Mulvaney said that he would "absolutely" put Trump on the shortlist of Republican politicians who would run in the 2024 presidential election should he lose against Biden, which he ultimately did.

"I would absolutely put him on the shortlist of people who are likely to run in 2024. He doesn’t like losing," Mulvaney told a webinar hosted by the Dublin-based Institute for International and European Affairs on November 5 as votes across the US were being counted.

"Plus, don’t lose sight of the fact that he will be, I think, technically younger than Joe Biden is four years now, four years from now."