WATCH: Varadkar admits soldiers may return to the Irish border after Brexit

Ireland's Taoiseach Leo Varadkar admits that in the event of a no-deal Brexit, a military presence may have to be brought to the Irish border. 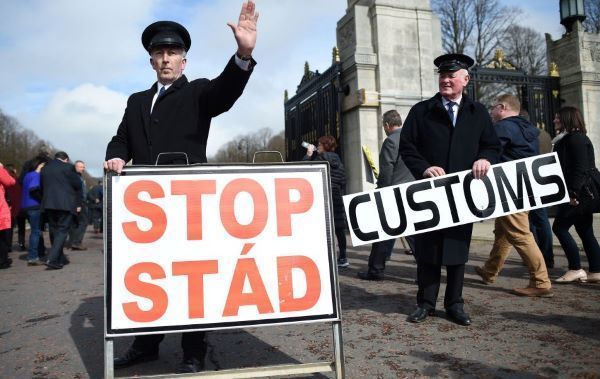 A no-deal Brexit could bring a military presence back to the Irish border, Ireland’s Taoiseach (Prime Minister) Leo Varadkar admitted.

Speaking with Bloomberg TV from the World Economic Forum in Davos, Leo Varadkar, the Irish prime minister, said that if no deal is put in place for Brexit, soldiers may have to be sent to the border.

“If things go very wrong, it will look like what it looked like 20 years ago,” the Taoiseach said.

Elaborating, he said that a potential hard-border “would involve customs posts, it would involve people in uniform and it may involve the need, for example, for cameras, physical infrastructure, possibly a police presence or army presence to back it up,” in the event of a no-deal Brexit.

However, the Taoiseach was adamant that a hard border is the absolute worst case scenario, and that he and the Irish government want the backstop to be put in place.

“We want a legal guarantee and an operable mechanism which will ensure that we don’t lose all the progress that’s been made over the last 20 years in Ireland in terms of our peace process and the Good Friday Agreement,” Varadkar said.

He added that the European Union has been “at the foundation” of the progress between Northern Ireland and the Republic of Ireland.

“The backstop is a means to an end,” said Varadkar. “It’s a legal guarantee and an operable mechanism by which we know there won’t be a hard border as a consequence of Brexit and that’s why we have to hold so firmly on it.”

Varadkar said that while Ireland is open to discussions, “The objective is avoiding a hard border.”

He added, “Why is that the country who is being victimized is always being asked to give?”

The Taoiseach went on to say that while he understands many British politicians are against both a hard border and a backstop, no one seems to have offered a reasonable alternative.

“The only alternative they have to a backstop is a promise to sort it out later, or a promise around technologies that don’t exist yet,” said the Taoiseach.

Earlier this month, British Prime Minister Theresa May suffered a historic defeat in Parliament when the Brexit plan she put forward - that the Republic of Ireland had agreed upon - was voted down 432 to 202 votes.

Of that Brexit plan, Varadkar said: "We came up with a solution ... now their Parliament has rejected it.

"Why are the ones who are constantly being asked to help them solve the problem they created?" asked Varadkar.

“We’re not going to give up the mechanism that we know will work."

What do you make of Taoiseach Leo Varadkar's comments on Brexit? Let us know in the comments