Theresa May's Brexit deal was rejected by 432 votes to 202, the largest defeat for a sitting government in history. 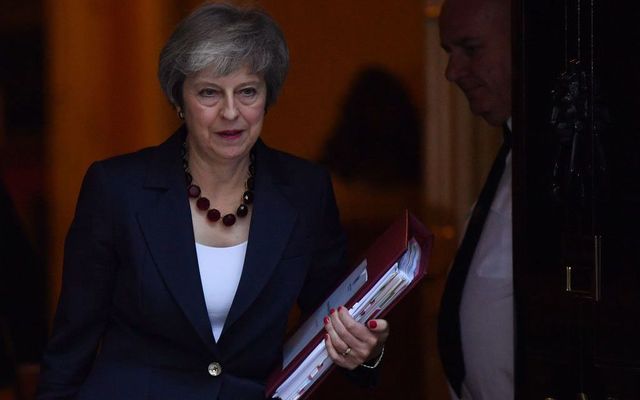 Theresa May's Brexit deal was rejected by 432 votes to 202, the largest defeat for a sitting government in history.

The British opposition leader, Labour Party leader Jeremy Corbyn, has tabled a motion of no confidence in the British government after Prime Minister Theresa May suffered a staggering defeat on her Brexit deal.

The deal was rejected by the British parliament by 432 votes to 230 votes, making it the largest defeat of a sitting government in the country's history. Some 118 Members of Parliament (MPs) from May's own party voted with the opposition.

This was the moment UK PM May faced a disastrous defeat #BrexitVote pic.twitter.com/3TG5CkToOE

Prime Minister May has stated that time will be made to debate the motion of no confidence on Wednesday. The Northern Irish political party the Democratic Unionist Party (DUP), who prop up May's Conservative (Tory) government, has told the BBC that they will continue to support May in a confidence vote.

BREAKING:
DUP statement
"We will support the government in confidence vote". Ends

If the no-confidence motion is backed, however, the current government or anyone else who can form a majority will have fourteen days to win a further confidence vote. If nobody wins the second confidence vote within the two-week period, a general election will then be held with the Brexit deadline of March 29 fast approaching.

Immediately after the vote, Jean-Claude Juncker, president of the European Commission, warned the UK that time was running out.

I take note with regret of the outcome of the vote in the @HouseofCommons this evening. I urge the #UK to clarify its intentions as soon as possible. Time is almost up #Brexit https://t.co/SMmps5kexn

A spokesman for the European council president, Donald Tusk, also warned that the risk of a "disorderly" Brexit has increased.

"We regret the outcome of the vote, and urge the UK government to clarify its intentions with respect to next steps as soon as possible," the spokesperson said.

"The EU27 will remain united and responsible as we have been throughout the entire process and will seek to reduce the damage caused by Brexit.

The risk of a disorderly withdrawal of the UK has increased with this evening's vote. While we do not want this to happen, we will continue our contingency work to help ensure EU is fully prepared.

"We will continue our preparations for all outcomes, including a no-deal scenario. The risk of a disorderly exit has increased with this vote, and while we do not want this to happen, we will be prepared for it.

"We will continue the EU’s process of ratification of the agreement reached with the UK government. This agreement is and remains the best and only way to ensure an orderly withdrawal of the United Kingdom from the European Union."

In a pre-Brexit political climate, such a defeat for any Prime Minister would undoubtedly have been followed by their resignation but May was quick to outline her intention to stay on in a statement immediately after the vote.

"The House has spoken and this government will listen," she told MPs.

Her full statement on the next steps the British government will take can be read here:

Mr. Speaker, the house has spoken and the government will listen.

It is clear that the house does not support this deal. But tonight’s vote tells us nothing about what it does support. Nothing about how – or even if – it intends to honor the decision the British people took in a referendum parliament decided to hold.

People, particularly EU citizens who have made their home here and UK citizens living in the EU, deserve clarity on these questions as soon as possible. Those whose jobs rely on our trade with the EU need that clarity. So with your permission, Mr. Speaker, I would like to set out briefly how the government intends to proceed.

First, we need to confirm whether this government still enjoys the confidence of the house. I believe that it does, but given the scale and importance of tonight’s vote, it is right that others have the chance to test that question if they wish to do so. I can, therefore, confirm that if the official opposition table a confidence motion this evening in the form required by the Fixed-term Parliaments Act, the government will make time to debate that motion tomorrow. And if, as happened before Christmas, the official opposition decline to do so, we will – on this occasion - consider making time tomorrow to debate any motion in the form required from the other opposition parties, should they put one forward.

Second, if the house confirms its confidence in this government I will then hold meetings with my colleagues, our confidence and supply partner the DUP and senior parliamentarians from across the house to identify what would be required to secure the backing of the house. The government will approach these meetings in a constructive spirit, but given the urgent need to make progress, we must focus on ideas that are genuinely negotiable and have sufficient support in this house.

Third, if these meetings yield such ideas, the government will then explore them with the European Union.

Mr. Speaker, I want to end by offering two reassurances.

The first is to those who fear that the government’s strategy is to run down the clock to 29 March. That is not our strategy. I have always believed that the best way forward is to leave in an orderly way with a good deal and have devoted much of the last two years negotiating such a deal. As you confirmed, Mr. Speaker, the amendment to the business motion tabled last week by [Dominic Grieve] is not legally binding, but the government respects the will of the house. We will, therefore, make a statement about the way forward and table an amendable motion by Monday.

The second reassurance is to the British people, who voted to leave the European Union in the referendum two and a half years ago. I became prime minister immediately after that referendum. I believe it is my duty to deliver on their instruction and I intend to do so.

Mr. Speaker, every day that passes without this issue being resolved means more uncertainty, more bitterness, and more rancor. The government has heard what the house has said tonight, but I ask members on all sides of the house to listen to the British people, who want this issue settled, and to work with the government to do just that.

What are your thoughts on a vote of no confidence in the British government? Let us know in the comments section, below.