A no deal Brexit will likely lead to Irish unification polls show which makes Unionists support for no deal hard to explain. 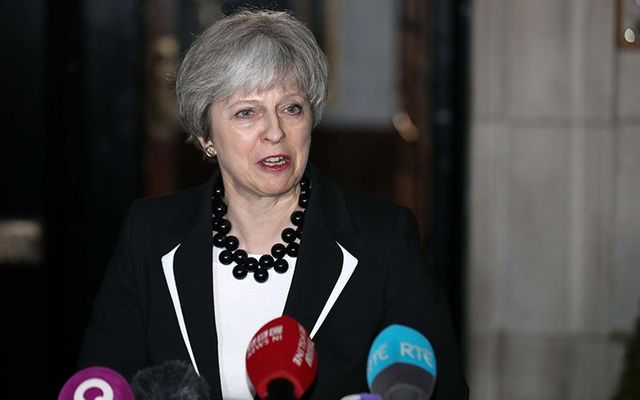 A no-deal Brexit will likely lead to Irish unification polls show, which makes Unionists support for "no-deal" hard to explain.

The quickest way to a united Ireland is a “no deal” Brexit, new polls are clearly showing. So the very act of the UK crashing out of Europe with no safeguards should be the catalyst for Irish unification.

Though she retained her job on Tuesday in a leadership vote, Theresa May is weakened with one-third of her party ready to vote against her on a  Brexit deal that ensures no Irish border, the backstop. That sets up a no deal Brexit departure.

The ramifications of a no deal Brexit in the North are huge. Remember the demographics are moving inevitably towards a Nationalist majority. A no-deal Brexit will merely hurry that day.

How do we know? Polling by the Lucid Talk company in Northern Ireland could not be clearer. No deal Brexit with the return of a border is a recipe for Irish unity.

Fifty-five percent say they would go for a United Ireland with just 42 percent voting to stay in the UK. A whopping 92 percent of nationalists would vote United Ireland in that situation with over 10 percent unionists voting with them.

What do the other numbers show?

How to prevent Irish unity? Defeat Brexit in a new referendum and rejoin the EU. The polls show that reversing Brexit is the only way to retain a clear majority to stay in the UK.

Sixty percent would vote to stay with only 64 percent of Catholics voting for Irish unity.

The poll shows a much tighter race if the British leave on the basis of Theresa  May’s plan of an agreed Brexit strategy or some variation on it. Forty-eight percent, in that case, would vote for Irish unity and 48 percent against.

So there you have it. The ultimate paradox. The major unionist party the DUP is seeking a no-deal Brexit which if followed by a border poll as agreed in the Good Friday Agreement, the results of that poll would be a united Ireland.

Turkeys voting for Christmas and Thanksgiving come to mind. However, logic has nothing to do with it.

.@DUPleader "The Prime Minister has promised to get legally binding changes. The reaction by the EU is unsurprising. They are doing what they always do. The key question is whether the PM will stand up to them or whether she will roll over as has happened previously. pic.twitter.com/ALbvmcGDyN

But there is no holding them back from their lemming-like march off the cliff along with the delusional English nationalists who firmly believe the empire can stand alone in Europe. Instead, the UK will dismember and become no more.

More bad news for the no-deal delusionists is that they will lose Scotland too, according to a poll there. A no deal Brexit would lead to 44 percent wanting an independent Scotland remaining in the EU with 30 percent wanting to stay in the UK and a large number of undecided.

Forgotten, of course, is the reality that both Scotland and Northern Ireland voted to stay in the European Union and by large margins too.  They are unwilling partners in the withdrawal process and angry that their concerns are hardly dealt with or acted upon by the London grandees obsessed with their own importance.

Beyond Brexit, the clock is ticking. Demographics are destiny. There is set to be a nationalist majority in 2023, according to the latest statistics on Northern Ireland.

A headline from today's @BelTel readers survey was 'Survey reveals 65% in Northern Ireland would now vote Remain'. See below for the section from the LT NI Tracker poll report published last Friday. Both the BelTel survey (albeit unscientific) & the LT poll shows the same trend! pic.twitter.com/RAf43a9nM1

In addition, as journalist Eamonn Mallie pointed out in the Irish Times on Monday, more and more middle-class unionists are open to the idea of the country being one island.

They can certainly  no longer talk about “Rome Rule” given the collapse of the Catholic Church, nor can they continue to believe they are on the right side of history

That ship has sailed and a no deal Brexit could end up being their Titanic. Still, they press on regardless, as if only they spoke for Northern Ireland. The iceberg is straight ahead and front and center gentlemen.

What do you think? Do you believe that a united Ireland is now inevitable? Let us know in the comments section below.