Saoirse Kennedy Hill was mourned by dozens of family and friends at a private funeral on Monday. 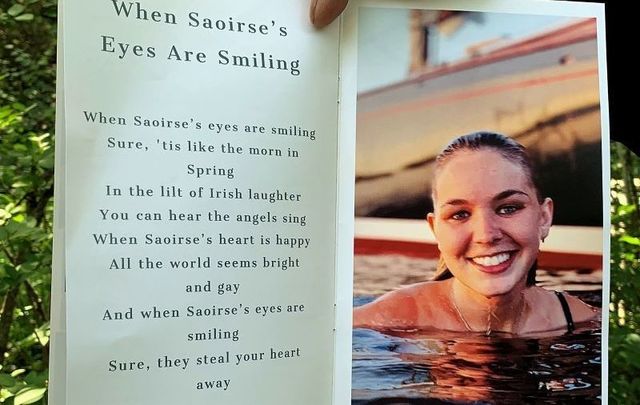 Saoirse Kennedy Hill was remembered with an Irish poem at her Massachusetts funeral on Monday, August 5. Jason Kolnos, Twitter

Saoirse Kennedy Hill was mourned by family and friends at a private funeral at Our Lady of Victory Church in Barnstable, Massachusetts on Monday, August 5 following the 22-year-old's unexpected death last week.

From the funeral, which was closed to the media, reporter Jason Kolnos shared a picture of the service’s program that featured a poem entitled ‘When Saoirse’s Eyes are Smiling,' an adaptation of the Irish tune 'When Irish Eyes Are Smiling:"

A moving poem inside the program for the funeral of Saoirse Kennedy Hill that is currently being held in Centerville #CapeCod pic.twitter.com/kbKXEqV7Qh

Dozens of family and friends joined together in mourning at Our Lady of Victory Church, the same church where Eunice Kennedy Shriver's funeral was hosted in 2009 and where Caroline Kennedy got married in 1986.

We love you Saoirse, and always will.

Who is Saoirse Kennedy Hill?

Kennedy Hill was the only child of Courtney Kennedy, daughter to the late Robert F. Kennedy, and Paul Hill, a member of the 'Guildford Four' who were wrongly imprisoned for their suspected involvement with an IRA bombing in 1974.

The 22-year-old, who had spent a lot of time in Ireland as a child, was set to begin her senior year at Boston College in the coming weeks where she was a Communications major and Vice President of the College Democrats.

The Irish American had previously spoken about her struggles with depression and mental health, writing in a 2016 piece for her high school newspaper: “My depression took root in the beginning of my middle school years and will be with me for the rest of my life. Although I was mostly a happy child, I suffered bouts of deep sadness that felt like a heavy boulder on my chest."

Authorities said afterward in a statement: “An autopsy performed today has revealed no trauma inconsistent with lifesaving measures. The cause and manner of death are pending the toxicology report.”

In a statement, the Kennedy family said: "Our hearts are shattered by the loss of our beloved Saoirse."

“She lit up our lives with her love, her peals of laughter and her generous spirit,” the family said. “[She] was passionately moved by the causes of human rights and women’s empowerment and found great joy in volunteer work, working alongside indigenous communities to build schools in Mexico. We will love her and miss her forever.”