White House gets its Irish up for St. Patrick’s Day

Irish American Joe Biden hosted his first St. Patrick's Day at the White House as President with events that ended up being largely virtual. 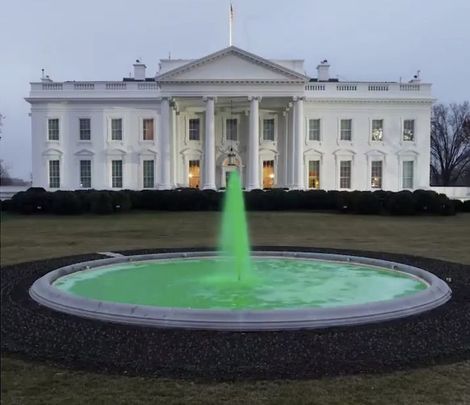 With a proud Irish American back in the Oval Office, it’s no surprise that St. Patrick’s Day in the White House felt particularly celebratory this year.

President Biden attended Mass his native Delaware on March 17 before returning to Washington, DC, and he kicked off St. Patrick's Day by looking forward to working with Ireland's Taoiseach Micheál  Martin:

As we celebrate St. Patrick’s Day, I’m reminded of my trip to Ireland in 2016 as vice president. The partnership between our two nations is historic and strong — and I look forward to renewing our bond during this afternoon’s bilateral meeting with Prime Minister Micheál Martin. pic.twitter.com/XdILGVzv5L

Upon his return to the White House, Biden was greeted by festively-dyed green water flowing in the fountains on the North and South lawns:

It's no secret that Biden is a fan of Irish poetry. Announcing that Ireland and the US are embarking on a new poetic partnership, President Biden recounted how he used the works of W.B. Yeats to overcome his stutter:

Thank you Brayden, Jessica, and Michael for your beautiful reading of W. B. Yeats’ work.

When I was a kid and working to overcome my stutter, I would recite Yeats’ words in the mirror. I’m glad they’ve helped you as well, Brayden, and I’m incredibly proud of how far you’ve come. https://t.co/QkD0JgCdJ1

Later, the Taoiseach, President Biden, and Speaker of the House Nancy Pelosi took part in a virtual Friends of Ireland event which marked the 40th anniversary of the congressional group.

In the afternoon came the marquee event - the private meeting between the Taoiseach and the President.

Prior to their meeting, which reportedly lasted more than an hour, the Taoiseach and the President offered remarks for the press where Biden, as has become par for the course for the proud descendant of Counties Mayo and Louth, again touted his Irish roots.

Biden recalled how his grandfather Ambrose Finnegan used to tell him “Joey, remember: The best drop of blood in you is Irish.”

“I remembered it, I promise you,” Biden said. “Because if I didn’t, my grandmother, Geraldine Blewitt Finnegan, would take me down.”

Reflecting on his previous visits to Ireland when he was Vice President, Biden said: “After I left, I wondered, why the hell we left in the first place. It’s beautiful. It’s beautiful.”

Turning to more business matters, President Biden said he looks forward to working with the Taoiseach on a range of issues, including global health, economic cooperation, and Ireland’s role on the UN Security Council.

He then, again, reaffirmed his support for the Good Friday Agreement: “You know my view and the view of my predecessor, of the Obama-Biden administration, on the Good Friday Agreements. We strongly support them; think it’s critically important that they be maintained.  And the political and economic stability of Northern Ireland is very much in the interest of all our peoples — the people-to-people ties.”

Concluding his opening remarks, the President said: “And so, everything between Ireland and the United States runs deep, Taoiseach. Our joys, our sorrows, our passion, our drive, and our unrelenting optimism and hope.

“One of the few quotes that I’ve been given credit for over my career was, I said — but I mean it — maybe it’s just my family — I said, ‘We Irish are the only people who are nostalgic for the future.’  And I think we are. "

You can watch President Biden and Taoiseach Martin’s opening remarks before their private meeting here:

After their meeting, President Biden shared in a tweet a personal message wishing everyone a happy St. Patrick's Day:

As a descendant of the Blewitts from Mayo County and the Finnegans from County Louth, I’m wishing everyone a happy St. Patrick’s Day. pic.twitter.com/nbYHPO8nE7