Is Ireland the most pro-US voice at the EU table? Brexit conference discusses US-Irish relations 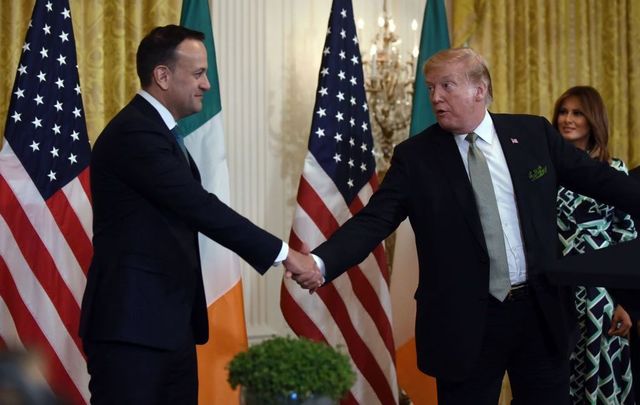 Will there be a second Brexit referendum? Will Brexit lead to a United Ireland? Brexit in the context of Irish-US relations discussed at major New York conference.

“Ireland is resolutely European … Ireland is better socially, economically and culturally because of our membership in the European Union … We’re better for it.”

The opening remarks from Consul General Ciaran Madden at “Understanding Brexit,” a New York conference on the crisis, set the positive tone for the day of talks on the future of US-Irish relations post-Brexit. Madden was introduced by ex Ireland Fund CEO Kieran McLoughlin, the overall moderator.

Watch highlights from the event here:

On March 15, IrishCentral hosted "Understanding Brexit," a New York event established with an aim to point a way forward for Brexit. Among the speakers were Irish Justice Minister Charlie Flanagan; House Ways and Means Chairman, Congressman Richie Neal; and Senator and former US Special Envoy to Northern Ireland during the peace process, George Mitchell.

With Brexit being the most pressing issue that has faced the Irish-American community since a pathway to peace was sought during the Northern Ireland Troubles, speakers grappled with the positives and negatives it could possibly hold for Ireland and what role the diaspora can play.

The event, hosted by IrishCentral, was established with an aim to point a way forward for Brexit, gathering together guests from the business community, journalists covering the departure negotiations, and representatives from both the Irish and British governments; many of whom expressed the need to put the best foot forward in a process that many of them, in reality, never wanted to happen.

Minister @CharlieFlanagan meets with Senator George Mitchell at @Irishcentral Brexit conference, following the conference’s panel discussion on Brexit’s impact on Ireland, the UK and the US with @amychozick @ibec_irl @EdwardGLuce @TedSmyth pic.twitter.com/7XiG3hz3ND

"The events of the past two years have underlined how intertwined our societies in Ireland and the UK have become through our joint membership of the EU," Irish Minister for Justice and Equality Charlie Flanagan outlined in his address.

"Whether it be trade, education, travel, citizens’ rights or the Northern Ireland peace process, the EU has played an important and positive role in the development of relationships across our islands.  Those relationships are now changing. We didn’t ask for the change but we must accept it is happening."

“I believe personally that Brexit will have a negative impact on the UK, on Ireland, and other nations.”

“The EU itself will be harmed by the departure of the United Kingdom.” - Senator George Mitchell pic.twitter.com/XBW0TEI2TG

Significant parts of the first panel of the day focused on the potential role of Irish America in the Brexit negotiations and whether its influence could encourage greater steps to be taken toward a deal.

Moderated by former diplomat Ted Smyth, the line-up for "Impact on the US, Ireland and the UK" included Amy Chozick, a political reporter with The New York Times; Ed Luce, National Editor of The Financial Times; Suzanne Lynch, Washington Correspondent with The Irish Times; Danny McCoy, CEO of the Irish Business and Employers Confederation; and Maureen Mitchell, Director of Sterling National Bank.

"Since I’ve arrived here this is the most vocal Irish America has been," she added but cautioned that "it’s important for Ireland not to get carried away on the backs of the shamrocks this week."

Chozick agreed that "the Irish diaspora has a lot of power in politics" but argued that in the current US political climate, the Northern Ireland border was always going to come second.

"If you talk about any border the focus will be on that [the US-Mexico border]."

“It’s not an issue Trump wants to talk about right now...he was initially very proud with himself for predicting Brexit...” - @amychozick / The New York Times pic.twitter.com/H5e0posg4c

"I don’t think Britain’s punch should be overstated either," argued Luce in return, later answering an audience question on the prospect of a United Ireland by describing it as "an instant suicidal kamikaze" for Prime Minister Theresa May to even suggest to the Democratic Unionist Party (DUP) propping up her government that she would entertain the idea.

Lynch also noted the presence of the DUP's leader Arlene Foster in DC events throughout the preceding week, adding that it was hard to forgive Sinn Féin for blaming the DUP for the two-year absence of a power-sharing government in Nothern Ireland when they themselves were not engaging in the political process.

Danny McCoy added a positive spin to the discussion, highlighting how "the damage done to Britain in the past two years may not have been felt in the high street but has been felt by investment.

"There are lots of fears from Brexit but we could have been going into this in the midst of the Troika crisis."

He also spoke of the effect of an extension of the Brexit deadline on investment adding, "an extension of article 50 will extend that cliff edge ... there’s a hope that a with a longer extension that people will get about making those investments."

"Don’t discount what has been done on a diplomatic basis."

A role not to be envied came in the second panel of the day as Anthony Phillipson, Her Majesty’s Consul General & Trade Commissioner for North America, addressed a room of guests concerned about Ireland's future position in the world, speaking from the British government's standpoint.

Read more: US will back Irish over British on Brexit border, Irish leader says

"The Prime Minister [May] has been clear throughout that we want to establish a relationship with the EU that does not affect the Good Argument Friday.

"The question now is how do we get to there," he added, later reiterating that it was their position not "to get stuck in a backstop."

"We’ve moved from the Cheltenham Festival to the Grand National - [from] favorites win to the last horse standing," joked Kelly of the Brexit negotiations leading up the March 29 deadline.

He was just one of the speakers throughout the day to highlight the fact that Brexit is not the only issue being faced by global business, but allowed that "business people are very frustrated with the uncertainty … By the amount of energy, time and resources dedicated to this discussion."

"When you take it on a global phase ... Brexit is important but there’s a lot of other issues that business people are dealing with.

"The next generation of Northern Ireland people are viewing it very differently. The ones I’m dealing with, young entrepreneurs,  ... they're asking how do I go about my business, how do I educate my children?

"There is a great opportunity for Northern Ireland," he added.

“I sense business people are very frustrated with the uncertainty ... From the amount of energy, time and resources dedicated to this discussion.” - Shaun Kelly, Global Chief Operations Officer, @KPMG pic.twitter.com/xad6YHPN3j

"Working with a lot of international companies, I've seen that they've faced a number of issues and this is just one of them," said Etzold in agreement.

"They’re worried about GPDR, data, cybercrime … the biggest frustration [of Brexit] is not knowing and not being able to plan."

Adding further to the positive nature of the discussion was the American Chamber of Commerce Ireland's Mark Redmond.

"There isn’t a parish, town or community in Ireland that is not benefitting from US investment … it is not going away," he said, citing a prediction from Irish Ambassador to the US Dan Mulhall, who earlier this week claimed that in a very short period of time, "Irish companies will employ more people in the US than US companies in Ireland and those jobs aren’t going away."

While the IDA's Martin Shanahan did not shy away from the many downsides of Brexit for Ireland, he also looked forward to the ways in which it had acted to the benefit of the country so far.

"Brexit is not what Ireland would have wanted," he said.

"We don't believe it’s good for Ireland the UK or Europe but we respect the decision of the people of the UK."

"Brexit overall for Ireland is bad news, no question about that ... It will particularly have a negative impact on our indigenous economy … but it is also true to say that Brexit has created new investment since 2016 ... Companies were very happy in the UK and Brexit gave them the opportunity to think of their EU footprint."

You can view more on the "Understanding Brexit" conference hosted by IrishCentral through our live updates here. Below, is the address delivered later in the program by Senator George Mitchell and Congressman Richard Neal.

We are live with George Mitchell, former US Special Envoy to Northern Ireland, who was instrumental to the creation of the Good Friday Agreement. He will speak on Brexit and Northern Ireland.

We're live with Congressman Richie Neal, Chairman of the House Ways and Means Committee, which will oversee U.S.-U.K. trade deals after Brexit.