Joe Biden was among a number of US politicians who paid tribute to John Hume after his passing on August 3. 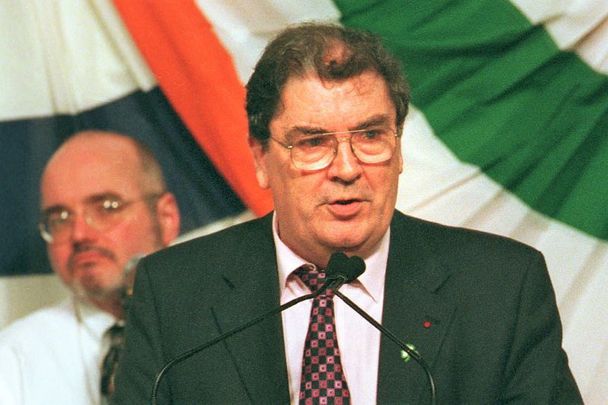 John Hume, who passed away on August 3, is remembered as a "great man of peace" by Joe Biden.

John Hume, an Irish politician, civil rights activist, and Nobel Peace Price laureate, is being remembered fondly by US politicians following his death on August 3.

John Hume committed his life to the principles of nonviolence, and through his faith, statesmanship, and perseverance, he helped bring Northern Ireland through the Troubles to a better tomorrow. Jill and I send our condolences to the entire Hume family. https://t.co/5QmRsj2fSb

Joe Biden's full statement, which he shared on Medium, says: “We have lost another great man of peace. John Hume committed his life to the principles of nonviolence, and through his faith, statesmanship, and perseverance, he helped bring Northern Ireland through the Troubles to a better tomorrow. He saw the power of political leadership to bring a divided people together around a common purpose, without which the Good Friday Agreement would never have come to pass.

"Jill and I send our condolences to the entire Hume family. May his leadership and the example of his life continue to inspire future generations of peacemakers and patriots to create a world more grounded in civil rights, tolerance, equality, and democratic freedoms.”

US Secretary of State Mike Pompeo said he was saddened to hear of Hume's passing:

I am saddened to hear of the passing of John Hume, a key figure in Northern Ireland’s transition to peace and stability and a friend of the United States. Together with our Northern Irish friends, we mourn his passing and we will continue our important work to honor his legacy.

In a statement, Pompeo said in part: "Mr. Hume’s influence extended far beyond the shores where he lived. During the darkest days of Northern Ireland’s recent past, he won the friendship and respect of countless Americans. His early and sustained influence in bringing U.S. political and economic support to Northern Ireland cannot be overstated, and this profound partnership and friendship continues today."

RTE News reporter Brian O'Donovan shared a statement issued by former US Senator and former US Special Envoy to Northern Ireland George Mitchell, who was an architect of the Good Friday Agreement:

“John Hume was one of the greatest persons in Irish history, an advocate for and an architect of peace” - statement from former US Special Envoy to Northern Ireland George Mitchell. #JohnHume @rtenews pic.twitter.com/x52Da4b7bz

Mitchell said in the statement: "John Hume was one of the greatest persons in Irish history, an advocate for and an architect of peace. He was rightly recognized as a fearless leader who devoted his life to the cause of peace in Northern Ireland. He was a close and dear friend to me. All who knew and admired him will miss him very much."

Daniel Mulhall, Ireland's ambassador to the US, said he has admired Hume since he first met him over 30 years ago.

I have admired John Hume since I met him in Brussels in 1980s. He was a towering figure in Ireland & the EU who was indefatigable in his pursuit of peace for which we owe him a debt of gratitude. May he Rest In Peace. I extend my condolences to his family. https://t.co/vX1DzZ8RnV

Mulhall later shared a piece he wrote about John Hume last year in which he says: “among the many things for which he (Hume) deserves credit is the fact that he brought Irish-Americans along with him on a journey that helped turn the US into a not inconsiderable force for peace and reconciliation in Ireland.”

Edward F. Crawford, the US Ambassador to Ireland, said Hume was a "true visionary and risk-taker."

of non-violence and democratic values. He was a true visionary & risk-taker whose belief in working through differences to find compromise helped bring enduring peace in Northern Ireland, for which we all owe him a debt of gratitude. My sincere condolences to his family. 2/2

Massachusetts Representative Richard Neal, who serves as the chairman of the Ways and Means Committee and visited Hume's native Derry last year, said:

The island of Ireland is a better place with a brighter future thanks to John Hume’s heroic leadership. I am proud to have called him a close friend and colleague for more than 30 years. May he rest in peace. https://t.co/MMuKOOtngF

Saddened to hear this news. John Hume was one of those who made the Good Friday Agreement possible. Blessed are the peacemakers. https://t.co/ct4szKjk3K

Irish American Marty Walsh, the mayor of Boston, Massachusetts, said Hume was a "symbol of progress for Northern Ireland:"

I am saddened to hear of the passing of John Hume, an important change-maker and symbol of progress for Northern Ireland. His dedication to creating peace and nonviolence is a lesson we should all reflect on and learn from. He will be deeply missed.https://t.co/MLoTK42YAn

The Martin Luther King, Jr Center in Atlanta, Georgia also paid tribute to Hume, who they honored in 1999:

Remembering the life of Nobel Peace Prize laureate #JohnHume, who died today. He was The King Center’s 1999 #MLK Peace Prize recipient and a key contributor to the Good Friday Peace Agreement or Belfast Agreement. We are grateful for his legacy and work as a peacemaker. pic.twitter.com/GrFX9nF9WV

President Donald Trump nor Mick Mulvaney, the current US Special Envoy to Northern Ireland, have commented on the passing on John Hume at the time of publication on Tuesday afternoon.

Hume's obituary in the New York Times read in part: "Mr. Hume was so concerned about multimillion-dollar funding for the I.R.A. by Irish Americans that he traveled frequently to Washington to convince American leaders, from President Jimmy Carter onward, that a majority of Northern Irish people rejected the I.R.A.’s violent methods. It was a message that culminated in a more active role in Northern Ireland adopted by President Bill Clinton.

"In one of three visits to the Clinton White House by Mr. Hume, Mr. Clinton lauded him as 'Ireland’s most tireless champion for civil rights and its most eloquent spokesman for peace.'"

The obituary added that Hume "remained close to leading political figures in the United States and was an energetic salesman for the territory, helping to persuade companies to move there.

"When Jean Kennedy Smith, the older sister of Senator Edward M. Kennedy, was appointed ambassador to the Irish Republic in 1993, Mr. Hume became one of her constant advisers. She responded by helping to persuade President Clinton to end American sanctions against Sinn Fein and to support the inclusion of Mr. Adams and Sinn Fein at the peace talks."