John Hume was almost the forgotten man on one of the biggest days in Irish history, recalls Niall O'Dowd. 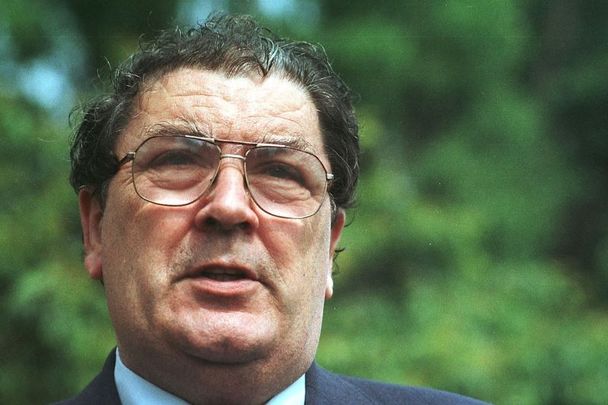 The first sitting of Northern Ireland's power-sharing government was "was John Hume's triumph more than anyone." Sadly, the peacemaker passed away on August 3, 2020 in his native Derry.

A note from Niall O'Dowd, August 3, 2020: In July 1998, the Northern Ireland power-sharing government sat for the first time. It was an incredible historic breakthrough and John Hume could take full credit, even though he was in fading health. Senator Edward Kennedy among others came to witness his incredible achievement. It was an honor to be there on the day.

STORMONT, JULY 1998: He shuffled rather than walked from his car in the parking lot towards the big building directly ahead of him. Up close he had clearly lost considerable weight, and his pale colour reflected someone who had just overcome a serious illness.

John Hume walked almost unnoticed into the main hall at Stormont on Thursday, past the bank of television cameras eager to catch every morsel from the mouths of David Trimble. Seamus Mallon and Gerry Adams. He walked through the serried files of journalists, exchanging pleasantries but sparking none of the frenzy that a Trimble or Adams appearance caused on this day. John Hume was almost the forgotten man on the biggest day in recent Irish history.

Yet the historic day was his triumph more than anyones. At a time when we are all peace processors, from the most trenchant revisionists in the Irish media to the heart and soul of the British government, it is worth remembering that John Hume and Gerry Adams stood alone for several years, cast into outer darkness by the very establishment, media and political, that now rushes to embrace their vision.

Remember the scalding attacks on Hume in the Sunday Independent, the week when a half dozen separate articles ran attacking him? There were times when we in Irish America wondered how he could put up with all the relentless demonization in the British and Irish press, but somehow he persevered.

Remember too the scorn and outrage heaped on him every time there was an IRA atrocity as he desperately tried to complete the pieces of the jigsaw?

Remember the near-universal view that he was wasting his time and that the IRA were using him cynically to further their own aims?

Some of those same journalists now say they believed Hume all the time, knew that what he was doing would work out, rush to embrace him. Their cynicism and about-faces reflects the reality that much of the journalism in Ireland is about power with no responsibility. If John Hume had got it wrong, hundreds more would now be dead, thousands injured. Revisionists don't even have to say they're sorry.

You don't hear the anti-Hume rhetoric anymore. The Nobel Prize tends to mute that type of criticism, as do the historic scenes we have witnessed over the past few weeks. The guns are silent as he predicted, the people are spilling their sweat not their blood as he admonished them to do. He shaped the hand of history that is on all our shoulders.

Now he has handed off the Assembly role to his deputy Seamus Mallon and seen his protégé Mark Durkan take the top job of Finance Minister in the new cabinet. He has led his party to power in Northern Ireland, an accomplishment that looked utterly unlikely just a few short years ago. It was his vision of an All- Ireland vote carried out on the same day that has underpinned and copper-fastened this Belfast agreement. Without that democratic mandate, it is entirely possible the agreement would have been consigned to the rubbish bin by now.

It is his relentless pursuit of the peace process in the face of near-universal odium that created a legacy that deservedly won him the Nobel Prize. While he may not have been centre stage on Thursday, the architecture of this settlement was largely his.

And what history it was! Our American delegation of congressmen and businessmen was sitting in the member's dining room with the Sinn Féin ministers and Gerry Adams. Not more than a few tables away sat the Reverend Ian Paisley and Peter Robinson, glowering at the newcomers who had come to claim their rightful place in government.

Outside the statues of Edward Carson, "Ulster will fight and Ulster will be right" and Lord Brookeborough who wanted "no Catholic about the place" must have been shivering in the chill wind of change that blew in from the North Sea. Not only were Catholics about the place, they were helping run it.

Back in the Sinn Féin compound, the notice board contained an Irish language lesson for new members, obviously the first time the old Celtic tongue had reverberated through those corridors.

The new Minister for Education, Martin McGuinness fielded numerous questions about whether he would be fair to those from the other community.

It was a misguided question, considering his department had been run by unionists or British ministers largely indifferent to nationalists since its inception.

The new jobs for Martin McGuinness and the other Sinn Féin and SDLP ministers showed that the inmates were finally helping run the asylum this week and nothing would ever be the same again. There is still a protracted battle on arms disposal ahead and the optimism that this will be easily resolved is misplaced in my opinion. Perhaps it will need the guiding hand of John Hume to once again salvage a solution to a still seemingly insurmountable problem.