John Hume's funeral will be held on Wednesday morning at St. Eugene's Cathedral in his native Derry 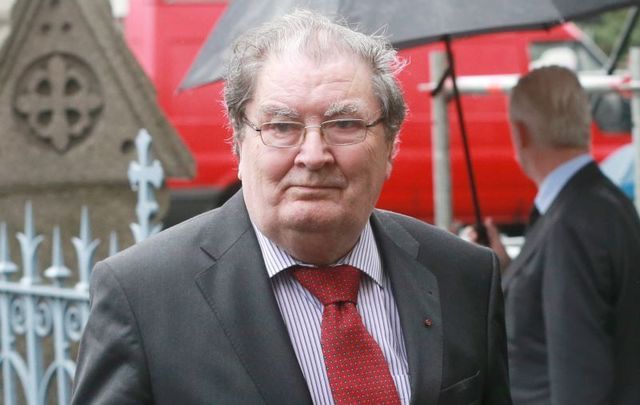 August 25, 2014: John Hume arrives at the Church of the Sacred Heart in Donnybrook, Dublin, for the funeral mass of former Taoiseach Albert Reynolds. RollingNews.ie

Instead of lining the roads to observe the funeral cortege, John Hume's family is asking people to light a candle in their homes and pray.

John Hume's family has asked mourners to "light a candle for peace" in their homes tonight at 9 pm rather than line the streets in order to prioritize public health.

According to The Irish Times, Hume's remains will be transported from his home in Moville, Co Donegal this evening, August 4, at 7:30 pm local time to arrive at St. Eugene's Cathedral in Derry sometime after 8:30 pm.

Hume's family said in a statement late on Monday: "John loved the people of Derry and Donegal. The heartfelt and sincere condolences that we have received from people across the island, but particularly from the communities John loved being a part of, have been immensely comforting to us.

"We know that he would have prioritized public health and the safety and health of our communities. We’re asking people to follow that guidance, please do not put yourself or others at risk.

"Instead we would ask that people light a candle for peace at 9 pm in their homes or at their door."

Additionally, Father Paul Farren, Administrator of the Cathedral of Saint Eugene who met with the Hume family on Monday, said: “Pat and her family are very grateful for the outpouring of love and support following the death of their beloved John.

"The family are anxious that a public gathering for John’s funeral might inadvertently put someone’s health at risk in the context of the current COVID19 pandemic, and are asking that people express their grief by staying at home and joining with the Hume family in a ‘Celebration of Light for Peace.’”

Father Farren continued: “Instead of lining roads and streets to show respect for John, it is the wish of the Hume family that we remain at home and, at 9:00 pm, light a candle and join with the family to pray the Prayer for Peace of Saint Francis of Assisi in the presence of John’s body in the Cathedral.

"This ‘Celebration of Light for Peace’ is a fitting tribute to a much loved and distinguished Irishman.”

Father Farren shared the words for the Prayer of Peace by Saint Francis of Assisi:

Lord, make me an instrument of your peace:

Where there is hatred, lew me sow love;

Where there is injury, pardon;

Where there is doubt, faith;

Where there is despair, hope;

Where there is darkness, light;

Where there is sadness, joy.

O divine Master, grant me that I may not so much seek

To be consoled as to console,

To be understood as to understand,

To be loved as to love.

For it is in giving that we receive,

It is in pardoning that we are pardoned,

And it is in dying that we are born to eternal life.