The Sinn Féin president will use the 48-hour visit to brief Irish American leaders and politicians on negotiations in the North, Brexit, and the needs of the undocumented Irish. 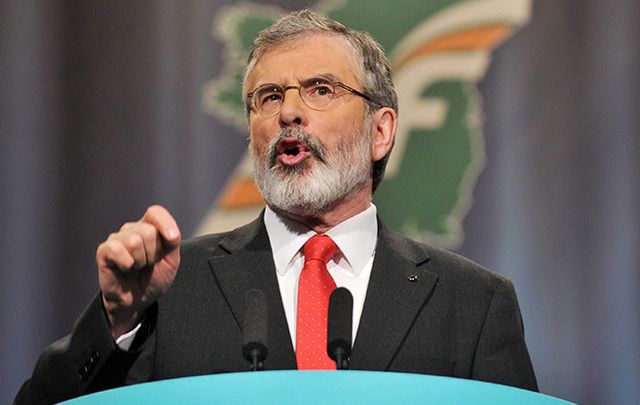 Sinn Féin President Gerry Adams TD will travel to the USA during the St Patrick's week for a short 48-hour visit to brief Irish American leaders and politicians on the negotiations in the North, Brexit and the needs of the undocumented Irish.

This will include a meeting with the Friends of Ireland in Congress, Irish American representatives, and, if invited, he will attend the Speaker's Lunch and an event in the White House.

“At this critical time in the Irish peace process it does not make sense for Irish leaders to exclude ourselves from an opportunity to engage on critical issues like the crisis in the political institutions, Brexit, the future of the Good Friday Agreement, Irish unity and the rights of the undocumented Irish in the USA.

“Consequently I will travel to the USA in March.

“I understand that all of this is happening at a time of deep concern in Ireland and globally at the actions of Donald Trump since his election as President of the United States. Sinn Féin has been to the fore in opposing these measures.

“We have raised our concerns in the Dáil, written to President Trump directly to outline our opposition and Michelle O’Neill has made clear that if returned to the Executive we would not issue an invite to him to visit Ireland.

“Since Bill Clinton lifted the ban on my entry to the United States in early 1994 Sinn Féin have had to work with a number of US Presidents who we strongly disagreed with in relation to the invasion of Iraq and Afghanistan, their support for Israeli aggression against the Palestinian people, and the blockade of Cuba. We raised our objections publicly and with each of them and will continue to do so with this President.

“Sinn Féin's priority now and at all times is to advance Ireland’s national interests, most especially the peace process and the demand for Irish re-unification. We are also very mindful that the Saint Patrick’s Day celebrations are bigger than President Trump. It is the biggest event in the Irish American calendar.”