Finally the threat of Brexit to Ireland emerges

Britain will be leaving the EU and taking back full control of immigration. 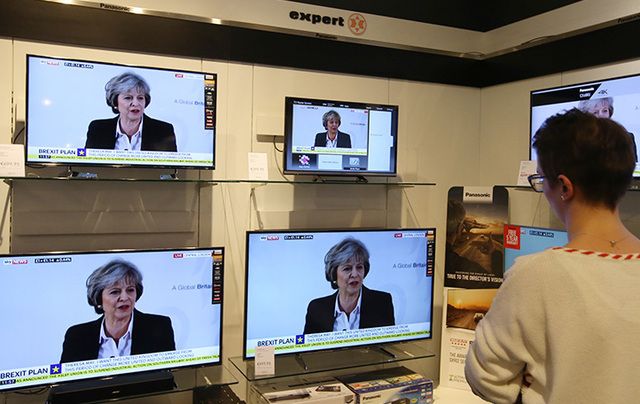 PM Theresa May speech's main message was that Britain will be leaving the EU and taking back full control of immigration. RollingNews

Last week, more than six months after Britain voted to leave the EU, we finally got some idea of the threat that Brexit poses to Ireland.   Up to now we have had no way of assessing the extent of the threat for the simple reason that no one was really sure what the British government had in mind and what it would do if negotiations with the EU before it leaves do not go well.

Would it be a "soft" Brexit, causing the minimum disruption to trade and movement?  Or would it be a "hard" Brexit, with Britain crashing out of the EU with little if any agreement in place on trade and tariffs?

Up to last week what we had gotten repeatedly from British Prime Minister Theresa May was her line that "Brexit means Brexit."  Apart from stating the obvious (that Britain was definitely leaving), this told us nothing about what that would mean for the U.K. itself, much less what it might mean for Ireland and the rest of the EU.

May said regularly in recent months that after Brexit she wanted the EU and Britain to remain as close as possible, that she wanted what was best for Britain and best for Europe, particularly on trade.  She seemed to be holding out the possibility that Britain could limit immigration and also be half in and half out of the Single Market and the Customs Union.  But there was no detail.

As frustration with May grew, there were ever louder demands that she fully reveal her plans for the U.K.'s future relationship with the EU and spell out precisely what she wants to achieve in the negotiations that will begin once the two-year leaving process is triggered in March, as she promised.

Well now we know at least some of what she wants.  Last week May at last delivered a major speech in which she set out her vision for a "Global Britain" outside of the EU and the future relationship she hoped to negotiate for Britain as a non-member.  In spite of all the wishful thinking on the part of the Irish government about a "soft" Brexit, there is now little doubt that a very hard Brexit is on the way.

Central to May's speech was her declaration that if it came to a choice between taking back full control of immigration and having access to the Single Market, then Britain would be completely opt out of the Single Market as well as the EU.

We should probably have known all along that this was coming down the tracks.  May obviously has concluded that the Brexit vote was primarily an expression of frustration by British voters at the level of immigration into the U.K., much of it from EU member states in Eastern Europe.  So she really had no choice -- controlling immigration requires Britain to leave the EU, and if it also means leaving the Single Market then so be it.

Could there be some sort of compromise, as she hopes?  Probably not.

Negotiating restrictions on immigration in return for a reduced level of access to the Single Market is unlikely to happen since the free movement of people across the EU is one of the "four freedoms" that are the core principles of the Single Market (the other three being the free movement of goods, services and capital).  The EU leaders have always been clear about this, insisting it is non-negotiable.

It was always that simple, and in her speech last week May laid out the reality in unequivocal terms.  Britain will be leaving the EU and taking back full control of immigration.

She hoped agreement could be reached on the U.K. having some access to the Single Market and partly staying in the Customs Union (which allows tariff-free movement of goods across EU countries and has common external tariffs on goods coming into the EU from outside).  But in the future, she said, the new Global Britain would be doing its own trade deals with major countries around the world.

The effect of this on Ireland will be horrendous because we have more to lose in this situation than any other European country, given our reliance on the British market.  No other EU country comes anywhere near the level of trade we have with Britain.

If Ireland remains in the EU, as it is determined to do, and Britain is out of the Customs Union as well as the Single Market, then our exports to Britain could face heavy tariffs.  If Britain drops out without any agreement then WTO (World Trade Organization) rules and tariffs are likely to apply.

Many other sectors will be affected and overall our exports to Britain could fall by 30 percent, he said.  The effect on jobs and the economy here would be significant.

An obvious way out of this would be for Ireland to do its own free trade deal with Britain, but this is not allowed while we are part of the EU.  The EU negotiates as a block with other countries like the U.S. or China.  If Ireland were given privileged low tariff access for its agricultural produce to the U.K. you can be sure that French farmers (and many others around Europe) would be up in arms.

Whether Britain would want to buy so much of our beef after Brexit is doubtful anyway since it would then be free to buy mountains of Brazilian beef without having to pay the EU tariffs that protect farmers in Europe -- and the same would apply to many other food products which are far cheaper on the world market.

Apart from trade and the economy, the other factor in a "hard" Brexit that could have a significant impact here is the restriction on freedom of movement.   As you know, the freedom of Irish people to enter the U.K. and to live, work and vote there goes back decades, long before either Ireland or Britain joined what is now the EU.

May made it clear again in her speech last week that she wants this to continue because of the uniquely close ties between Ireland and Britain. Which is very nice for us, but it could be a problem if our fellow members of the EU -- like all the Poles who go to Britain -- object to us being given special treatment.

And of course all of these factors are made much more complicated by the fact that Ireland is the only EU country to have a land border with Britain. The Irish government has been reassuring people here that there is "no way" we can go back to the old hard border between Northern Ireland and the south, with customs posts, identity checks and security.

May in her speech last week echoed this, although she chose her words carefully, for example saying she wanted the border to be as "frictionless" as possible in future (which is not the same as saying there will be no border).  Irish ministers have been talking about new electronic methods of checking trucks and spot checks on traffic and people, rather than a hard border stopping everything.

That's all very desirable.  But the reality is that a hard Brexit will have to mean a hard border of some kind -- virtual or otherwise -- between north and south, to assess tariffs due and stop the south becoming a backdoor for goods and people moving into Britain.  Given the complexity and scale of trade and movement between Ireland and the U.K. this will be highly complicated and time-consuming no matter how we try to make it easy. Some kind of physical border with Northern Ireland seems inevitable.

The movement of people is not as big a problem as some people might think. The commitment by May last week to retain the common travel area between the two islands is manageable even without a hard border in Ireland partly because neither Ireland nor the U.K. have been members of the Schengen common travel area that covers most other EU countries.

That means anyone entering Ireland, either from the EU or anywhere else, has to show a passport.  The common travel area between Ireland and the U.K. gives us the right to go there; the reality is that we need to be able to show some kind of identity (in practice usually a passport) when we are entering the U.K.

Trade, tariffs and the movement of goods is the big problem we will face after Brexit, rather than controlling the movement of people.  May has gone out of her way to try to placate and reassure us that all will be well between Britain and Ireland after Brexit and Irish politicians have been downplaying the issue as much as they can.

But the reality is that it's going to be a huge problem for us, and when push comes to shove in negotiations with the EU, Britain will do whatever is best for itself, whatever the collateral damage to Ireland might be.

The Fianna Fail leader Micheal Martin put it well in the Dail last week when he warned Taoiseach Enda Kenny to be wary of May's assurances. “She will speak softly to the taoiseach and Britain is speaking softly but they will behave and act differently,” Martin said.

It's Perfidious Albion, as ever.

Read more: Sinn Fein’s changing of the guard is dramatic which is comforting