"The simple-to-understand demand should be that after UKEXIT there will be no land border across Ireland, staffed by no migration, police or customs officials, sentry boxes or pill-boxes, period." 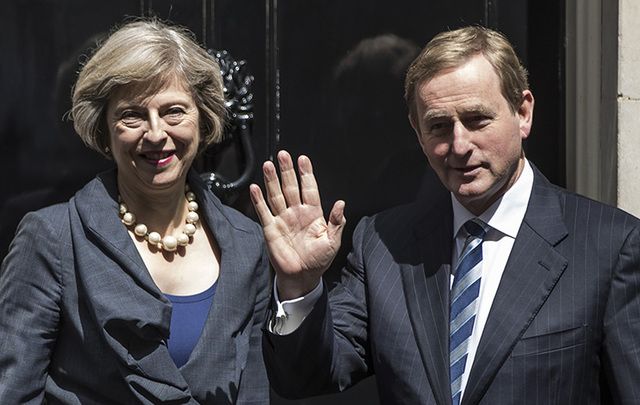 Defending the Good Friday Agreement and the 1999 British-Irish treaty should be the firm red line the Irish government demands concerning the UKEXIT decision.

Not only is it right that Ireland’s government should insist that the agreement and Treaty be fully protected, and call out the UK for threatening to violate both, but it is also to Dublin’s advantage to do so.

The simple-to-understand demand should be that after UKEXIT there will be no land border across Ireland, staffed by no migration, police or customs officials, sentry boxes or pill-boxes, period. All the rest is negotiable.

Let us be clear: this is a demand to keep the North’s existing European status as much as possible, within the single market and the customs union.

It would exclude Northern Ireland from full UKEXIT, precisely because of the UK’s previous commitments to a borderless island, and it would respect the preferences of the North’s voters.

Naturally, Dublin has other interests to protect: the economic interests of its citizens, and its resident businesses (foreign or Irish) and its corporate tax-rate that has helped its economic development and recovery. It also has future economic interests to advance, e.g., attempting to redirect Foreign and Direct Investment from Great Britain to Ireland.

But these interests have no traction with Ireland’s allies in the rest of the EU, because they are its competitors on these matters. Therefore, focusing on the Good Friday Agreement makes moral, political and strategic sense. It is simply the best way to deal with all the prospective bullies to Ireland’s east, be they English or of another nationality. DUBLIN should also do its best to protect Scotland’s current and future interests—after all it may become the next EU state.

Until now the Dublin government has been far too courteous to the May government. Perhaps it deemed it best to wait while London reconsidered its options. Assurances may have been and given—on border ‘issues,’ on ‘process,’ and so on. But, are any such assurances credible, if they are not public, and unambiguous—and known to Ireland’s EU-partners? 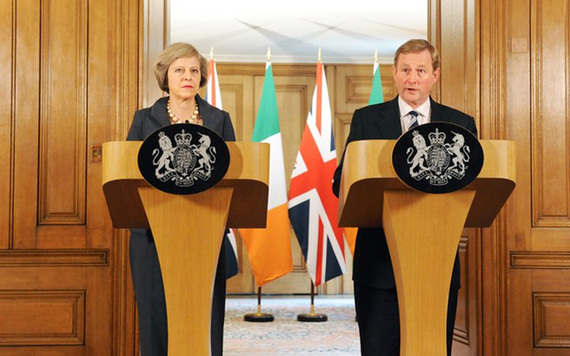 Prime Minister Thersa May and Enda Kenny inside 10 Downing Street.

In considering such assurances, whether from May or James Brokenshire, the so-named Northern Ireland Secretary, the Irish history of British promises should not be forgotten. Tales of perfidious Albion are not the unreasonable inventions of those who were born outside England.

Theresa May, the UK Prime Minister, has taken a long time to get back to the political position she took at the annual Conservative Party conference in September 2016.

But it no longer matters whether her vacillating performance in the interval is best explained by her indecisiveness, her ignorance of EU matters, or her distrust of her civil servants and her ructious Cabinet members.

What matters is that we now know for sure that she’s intent on a hard UKEXIT from the European Union—dragging with her Scotland and Northern Ireland, both of which voted to remain in the EU last summer.

If May has her way, the entire UK will neither be in the European single market nor in its customs union—freeing London’s government to control inward migration as it wishes, and breaking away from the jurisdiction of the Court of Justice of the European Union.

It is easy to imagine previously unthinkable horrors to follow, such as legislating for allegedly “British” human rights, and withdrawing from the jurisdiction of the European Court of Human Rights (which rudely prohibits torture, and firmly suggests that convicted prisoners retain some citizenship rights).

Yet if the Irish world may doubt the competence and the sanity of the May government, at least it now knows her government’s red lines.

But does it know Dublin’s red-lines?

Reacting politely to May’s recent speeches, the Taoiseach’s web-site affirms that the Government’s “priorities for the negotiation process that lies ahead are unchanged: our economic and trading arrangements, the Northern Ireland Peace Process including border issues, the common travel area, and the future of the European Union.” *

Any Irish adult could have delivered this list. Priorities, however, are not publicly advertised red-lines.

And these priorities are pathetically imprecise: ‘arrangements,’ ‘a process,’ ‘issues,’ and the EU’s ‘future.’ If the Dublin government has red-lines it’s time we heard them.

Dublin must publicly declare what will Not be an acceptable outcome of EU-UK negotiations, and let both the European Council and the European Parliament, and their respective publics, know in no uncertain manner. Now, and not later (when Ireland may conceivably become diplomatically isolated).

On Tuesday January 24 we will learn whether the UK Supreme Court respects the old or the new constitution of that kingdom. The old one requires the Westminster parliament to legislate before it takes away the rights of Crown subjects—including the EU citizenship of its citizens in Northern Ireland. The new one requires Westminster to seek legislative consent motions in the Edinburgh and Belfast parliaments. The old one treats the UK as Greater England; the new one recognizes a partnership of peoples.

Whatever that court decides let us hope that that the reaction on the Taoiseach’s web-site will not be bland. Let it be plain that the Dublin government is openly determined to protect its most important diplomatic achievement since it won full sovereignty between 1922 and 1949. It must publicly tell its fellow EU member-states that it has a principled bottom-line, for which there are no acceptable pay-offs.

* Brendan O’Leary, an Irish and US citizen, is Lauder Professor of Political Science, University of Pennsylvania, and Senior International Fellow, Senator George J Mitchell Institute for Global Peace Security & Justice, Queen’s University Belfast. He was recently elected a Member of the US Council on Foreign Relations.