"After almost four decades where the unquestioned leadership of Sinn Fein was Gerry Adams and McGuinness, that duo will no longer continue to be in command of the party." 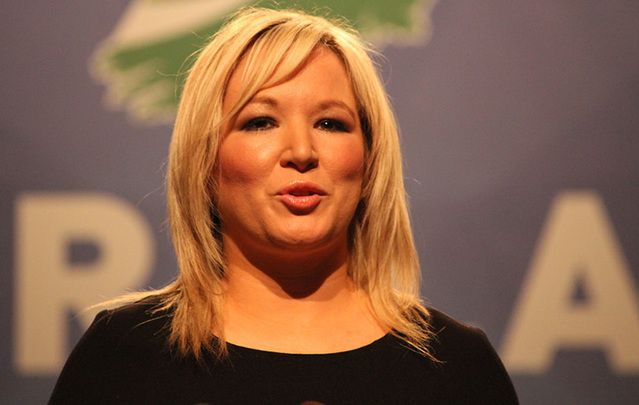 The decision by Sinn Fein’s former deputy first minister Martin McGuinness to step down from the party’s leadership for health reasons is momentous in itself.

However, the fact that the party has opted to name Michelle O’Neill, the 40-year-old minister for health, as his replacement to lead Sinn Fein in the North is perhaps just as dramatic.

After almost four decades where the unquestioned leadership of Sinn Fein was Gerry Adams and McGuinness, that duo will no longer continue to be in command of the party.

Instead Sinn Fein looks certain to elect two women leaders in the next few years.  It has been clear for some time that Mary Lou McDonald appears to be the favorite to succeed Adams in the Irish Republic. 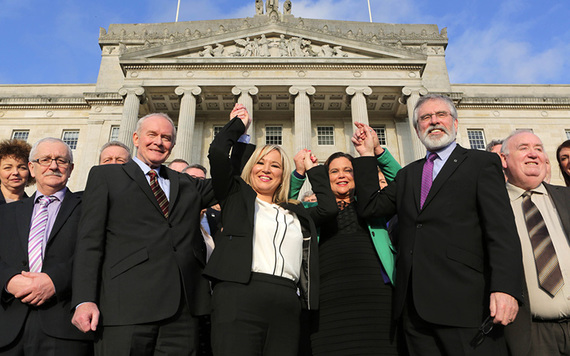 McGuinness, O'Neill, MacDonald and Adams on the step of Stormont.

The advent of such a change will leave Sinn Fein as a deeply changed party, from one run by veterans of The Troubles to one led by two younger women who give the party literally a completely different face.

The departure of McGuinness will be very difficult to compensate for.  His was a remarkable journey, from IRA leader defending the Bogside against marauding British and loyalist gangs, to shaking hands with Queen Elizabeth and welcoming her to Northern Ireland in an historic moment.

Despite the massive shift, McGuinness stayed true to his own ideals, and no one was more committed to seeing out the Good Friday Agreement than the Derry-born politician.

However, due to his sudden illness, McGuinness had to step aside.  But he can do so in the sure and certain knowledge that without him, there would be no peace in Ireland. His role will never be forgotten.

Like his fellow Derry man John Hume, he gave it everything in the pursuit of peace with justice, and while that task remains unfinished, there is no question that it has moved considerably in the right direction.

O’Neill will know that she has huge shoes to fill, but it has been obvious for some time that there is a new generation of Sinn Fein leaders -- young, articulate, untainted by participation in The Troubles.  They will be much harder targets for the anti-Republicans to aim at, given that their backgrounds are purely political.

The decision to skip a generation and make O’Neill the new leader of Sinn Fein in the North was a courageous one. Yet it is comforting to know that Adams, the party president, is still very much involved at the highest level.

Both Adams and McGuinness will have insight and advice to give O’Neill that they have built up over decades. Their pragmatic view may be that if Sinn Fein is to succeed, a new generation of leaders must be ushered through.

In that respect, O’Neill is the correct choice. She already contrasts very favorably with other leaders in Northern Ireland, most of them stuck in the old ways of doing things.

So it is all changed for Sinn Fein. The passing from the political stage of McGuinness is an historic moment.

Yet as he said, quoting his fellow leader Adams, “I haven’t gone away, you know.”

That in itself is comforting at a time when Northern Ireland once again faces an insecure future, with issues like Brexit, another election and Democratic Unionist Party intransigence on the front burner.