Gerry Adams has warned that a new European Union land frontier will rise on the island of Ireland and will run from Derry to Dundalk. 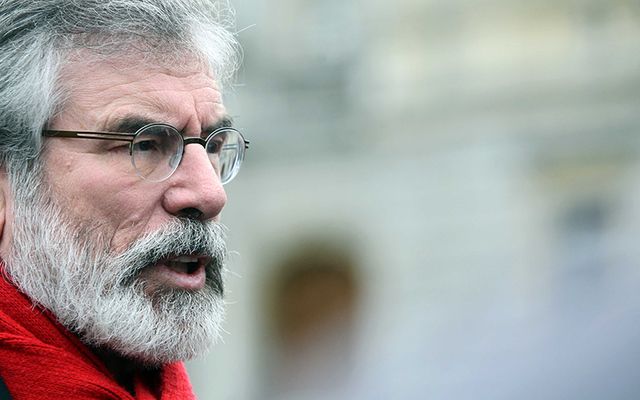 Gerry Adams has warned that a new European Union land frontier will rise on the island of Ireland and will run from Derry to Dundalk.

His warning came during exchanges in the Dáil on Tuesday just hours after it was confirmed that the Stormont Assembly will have no say over the British government’s Brexit process.

The Supreme Court in Britain ruled that the British government cannot begin talks with the EU until MPs in the House of Commons in Westminster give their backing.

Last week, the European Commissioner for Economic and Financial Affairs warned that Ireland couldn’t get into talks with the UK over customs issues ahead of Brexit negotiations.

“It has been to watch their game, instead of concentrating on our own,” he said.

“In fairness, the Taoiseach did set up the all-island civic dialogue after initially dismissing this idea when Sinn Féin first proposed it. And I know he has said his priorities are trade and the economy, the Common Travel Area, the peace process and the future of the EU.”

Its in our national & strategic interests that this gov takes an All Island view of the future #Brexit #Dáil pic.twitter.com/mgfkJ9ATuH

Adams added: “It is also in our national and strategic interests that the government takes an all-island view of the future, instead of an over-reliance with Britain and acquiescence to the British position.”

Speaking in the Dáil, Taoiseach Enda Kenny said his government had set out its priorities and said Northern Ireland has “particular circumstances” which were brought in by the Good Friday Agreement.

Speaking earlier in the day, Minister for Finance Michael Noonan said the UK’s exit from the EU could take up to six years.

He said negotiations between the UK and the EU would be difficult, including issues such as North-South arrangements.

British Prime Minister Theresa May has previously said the negotiations would only take two years.

Speaking at the Irish Times International Tax Event, Noonan said: “The Irish government has been undertaking an extensive program of engagement with all other EU governments and the EU institutions, to outline our key priorities for the Brexit negotiations.

"These are the economic and trading relationship with the UK, the Common Travel Area, Northern Ireland and the future of the EU itself.

“This engagement is being intensified in 2017. The government will continue to meet and engage with their EU counterparts over coming weeks to emphasize Ireland’s concerns and to ensure that they are fully reflected in the EU position once negotiations commence."

Meanwhile, Scottish First Minister, Nicola Sturgeon, said the Supreme Court ruling that the UK government is “not legally compelled” to consult with the devolved governments, including the Scottish Parliament, raised “fundamental issues” for Scotland.

“It is becoming clearer by the day that Scotland’s voice is simply not being heard or listened to within the UK,” Sturgeon said.