A United Ireland after Brexit is a fantasy

For traditional nationalists it's an appealing daydream but the reality is it's not going to happen any time soon. 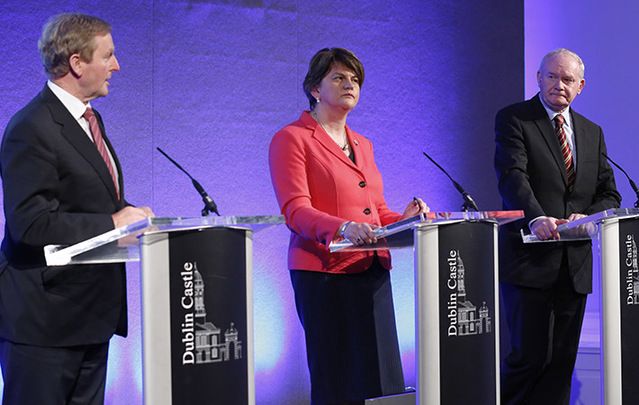 The idea that Brexit could lead to a united Ireland some time in the near future is a fantasy, despite what the Taoiseach Enda Kenny was saying last week when he raised the possibility.

For traditional nationalists it's an appealing daydream of course, the idea that partition might end quickly and all of the island of Ireland become, as the song says, "a nation once again."

But the reality is it's not going to happen any time soon, if ever.

The reasoning of those who were airing the notion last week (Sinn Fein and Fianna Fail were at it as well as Kenny) has a superficial logic.

Britain voted to leave the EU. The majority of people in Northern Ireland voted to remain in the EU. The only realistic way that can be achieved after Brexit is for the North to leave the U.K. and join with the Republic which, as you know, is an EU member state. (The only other scenario is that the North becomes an independent mini-state within the EU, but that is not a financially viable option.)

Does a return to the borders of the past await post-Brexit Northern Ireland? https://t.co/AH0xKBYRHB pic.twitter.com/ikJP8BkThJ

So is it a possibility? Kenny last week insisted that it is, even if it might be some years away from happening.

For that reason he thinks the upcoming negotiations at European level about Britain's exit should include discussions about the future position of Northern Ireland and the fact that a majority of people there wish to remain in the EU.

Read more: A federal United Kingdom is what Theresa May wants

This is necessary, he said, because as the reality of Brexit becomes clearer there could be a demand in the North for a border poll, with the possibility of that producing a majority in favor of joining with the Republic to remain in the EU. It is sensible that the EU discusses that possibility now rather than later, the taoiseach suggested, pointing to the way East Germany became part of the EU after German reunification.

Under the Good Friday Agreement, a referendum on joining with the south (a so-called border poll) will be held in the North if there is enough evidence of a popular demand for such a vote. The decision is taken by the secretary of state for Northern Ireland and the new incumbent in the job, James Brokenshire, has already ruled it out for the time being. And he was right to do so.

First out of the gate to call for an immediate border poll after the Brexit vote was Sinn Fein. They can hardly believe their luck at the situation and that the two main parties here have given oxygen to the idea by discussing the possibility of a vote, however remote. Fianna Fail followed, although their position is considerably more nuanced, pointing out the complexities involved.

The general view among politicians here is that such a knee jerk poll in the North would be unhelpful and almost certainly would end up in favor of the status quo. Even among the republicans who want Irish unity as quickly as possible, there is concern that a poll now would be premature and, since the Agreement specifies that a poll can be held only once every seven years, could be counter-productive. Somehow, Sinn Fein doesn’t seem to see this.

There is also the fact that the vote by the majority in the North in favor of remaining in the EU cannot be interpreted as a vote in favor of leaving the U.K., much less getting rid of the border and joining up with the south.

One does not follow the other. In fact all the evidence is that what a majority of voters in the North want is somehow to remain in both the EU and the U.K.

One of the most recent surveys on attitudes in the North to a united Ireland was carried out at the end of last year in a joint poll by RTE and the BBC. This showed that overall only 30 percent of people in the North were in favor of unity in their lifetime. That obviously means a lot of Catholics/nationalists are not in favor because they believe their standard of living is better in the U.K. and would fall if they became part of a united Ireland. In fact the poll showed that only just over half (57 percent) of Catholics/nationalists in the North were in favor of unity.

The same survey found that in the south, 66 percent of people wanted to see a united Ireland in their lifetime -- but this fell to just 31 percent if it meant paying any extra tax to facilitate that happening!

So the notion that there is a general wish for a united Ireland on either side of the Border is nonsense. Brexit has added a new dimension to the old debate, but it is unlikely to have changed that fundamental reality.

Added to that is the uncomfortable fact that a united Ireland involves a separate vote on both sides of the border. Even if a border poll in the North after Brexit produced a majority in favor of joining the south, it does not mean that a referendum on unity would be passed down here. Not that you often hear people saying that out loud.

Read more: Could a union between Northern Ireland and Scotland be the best Brexit solution?

In his remarks last week on the future of the North, Kenny strongly made the case that no one wants to see a return of the so-called "hard border" between North and South. We are all accustomed now to being able to move freely between north and south and no one, including the unionists in the North, wants to see that change, with the re-introduction of border posts, customs, security, identity checks and so on. Apart from the inconvenience, the economic costs would be substantial.

Theresa May and Enda Kenny 'want to keep close links' between UK and Ireland after #Brexit https://t.co/NVI6P4qGcL pic.twitter.com/m8J1RSLt3d

But although everyone on the island agrees with that, our border is a major problem, one which the new British Prime Minister Theresa May highlighted starkly some weeks ago.

With Britain restricting access through its borders after Brexit, it seems likely that many East Europeans who want to get into the U.K. will use the south of Ireland as a back door. And that back door will be wide open if there is no visible, active border between the south and the north here.

There are dozens of flights every week between cities in Eastern Europe and Dublin, and at present there is nothing to stop those people hopping on a bus or a train and heading to Belfast -- and then on to mainland Britain.

Controlling this would mean either a hard border between north and south or between the north and mainland Britain. It would also mean that the decades old free travel area agreement between the Republic and the U.K. would have to be curtailed.

On a flying visit to the North on Monday, May softened her stance slightly and said she was in favor of a "practical solution" to the problem in view of the long history of free travel between Ireland and the U.K. But she also mentioned that there would have to be a border between north and south, so no one knows yet what is going to happen.

Much of the talk here about Brexit pushing a majority in the North into voting to join the south so that they can remain in the EU is not just idle speculation: it is also financially illiterate. There are a few hard facts that need to be kept in mind in this debate.

The first is that Northern Ireland is still an economic basket case which requires massive subvention to support the people who live there. The big economic dividend that was supposed to flow from the peace has not emerged, and the area remains depressed with little to replace the traditional large employers of the past, like ship building and textiles. Unemployment is still very high and of those who do have a job, well over 30 percent are on the state payroll, even after security has been wound down.

What this means is that it costs a fortune to run the North, money which is transferred over from the U.K. mainland to cover the local budget deficit. At the moment it's around £10 billion a year, which equates to around 25 percent of the North's GDP. A deficit on that scale is, for example, far worse than was the case in Greece at its lowest point.

Because Britain is a big country with around 65 million people, it can afford to carry the North, although there was growing pressure from Westminster recently for cuts in spending on welfare and so on in the North to reduce the burden, something strongly resisted not just by Sinn Fein but by politicians of all hues there. You may remember this was so serious it led to a virtual shutdown of government in the North for a while.

Now place that scenario in the context of a united Ireland. Instead of the burden being carried by 65 million people in the U.K., it would have to be borne by the less than five million people in the Republic. For that to happen it would require massive tax increases and spending cutbacks in the south which would make the recent austerity years here look like a picnic.

Depending on the assumptions you make, it would require high double digit tax increases here. And even at that it would require people in the North to accept a much lower level of state spending on things like health and education than they have been used to up to now.

Numerous surveys of attitudes in the south, including the recent RTE/BBC one noted above, have shown that although people here retain a romantic attachment to putting the four green fields back together again (a united Ireland), that cozy feeling dissipates as soon as paying for it is mentioned.

A lot of wishful thinking is used to obscure this basic fact. We are told that the U.K. would be willing to chip in for a number of years to get rid of the North and that the EU would step in with massive funding.

But none of this is certain. The U.K. is facing its own deficit problems and the EU is constrained in what it can do by state competition rules.

Even if it were to happen, the Republic would still be left with a massive annual bill that would require a massive increase in taxation. And remember that the RTE/BBC survey last year found that people in the South are not prepared to pay ANY extra tax to achieve a united Ireland.

That's the reality. The rest of it is just talk.