The Archdiocese of New York says the decision to close St. Paul the Apostle School in Yonkers is “irreversible,” but supporters are not prepared to take no for an answer and will continue in their quest to save it. 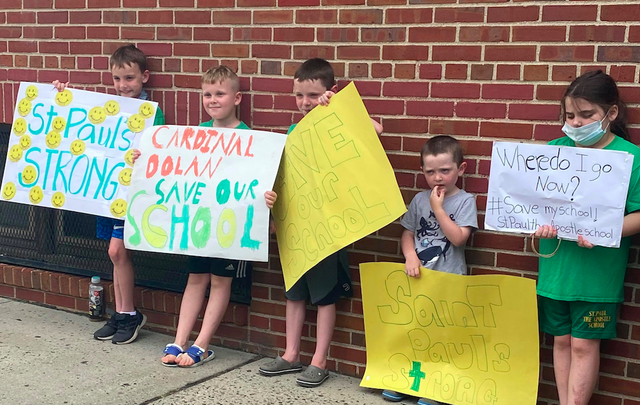 As parents and supporters of St. Paul the Apostle elementary school in Yonkers desperately battle to save the school from closure – a shock move announced by the Archdiocese of New York on July 9 – a spokesperson for the archdiocese told the Irish Voice on Tuesday morning that the decision is “irreversible.”

St. Paul’s supporters have been working frantically to drum up support for the beloved school in the heart of Yonkers that has served families, many of them Irish, for more than 50 years. They have staged multiple rallies and attended Mass at St. Patrick’s Cathedral on Sunday morning to put their case directly to Cardinal Timothy Dolan, who was not there, and say they will not give up hope no matter what the archdiocese says.

In a statement issued to the Irish Voice on Tuesday morning, T.J. McCormack, director of communications and public relations for Catholic schools in the Archdiocese of New York, said, “We admire the passion and resolve of the St. Paul families. Leadership has traded correspondence and held frank, informative calls with parents and elected officials in which the significantly high projected deficit of the school was addressed. This painful decision is irreversible and we hope parents will begin to have honest discussions with their children about this reality and join us in finding a Catholic school that best serves their needs.”

But parents and supporters of St. Paul’s say that they were never informed at any point that the school was on the financial brink, and had they been told they would have presented immediate plans to fundraise. They add that suddenly closing the school during an unprecedented pandemic – the archdiocese also announced the closing of 19 other schools – presents extra hardship to already stressed students and parents.

Most of all, they want archdiocese officials to know that they are not going away anytime soon.

“Parents are understandably getting more worried as the school year draws closer, but our parents are some of the most committed people. Along with the students, faculty, and alumni, they are ready to continue fighting,” Siobhán Nevin, 23, a 2011 St. Paul’s graduate, told the Irish Voice.

“There is a small group of parents, alumni parents, and alumni who already have fundraising plans and ways to help the school if given the chance. I'm sure if these plans can go into effect then all parents and the community will be out in full force to support.”

A group of 30 St. Paul’s supporters attended morning Mass at St. Patrick’s Cathedral on Sunday, hoping to see Cardinal Dolan. They were told he was on vacation when they knocked on the door of his residence to deliver a copy of last week’s Irish Voice that detailed the efforts to save St. Paul’s.

On Monday evening, supporters gathered at Yonkers City Hall where the clock tower was lit up in school colors to support the school.  Further events are planned, Nevin says, until such time that the archdiocese changes course.

“This school and community are incredibly special. It's not every day you find a school or faculty that cares so deeply about both their student's wellbeing and academic success,” Nevin says.

“Our biggest concern right now is that the archdiocese is just trying to wait us out. But we won't go away quickly or quietly.  We have our ideas and know where we want to go. It's just a matter of making them listen.”