Two people were captured on surveillance video spray-painting the facade of St. Patrick's Cathedral in New York City on May 30. 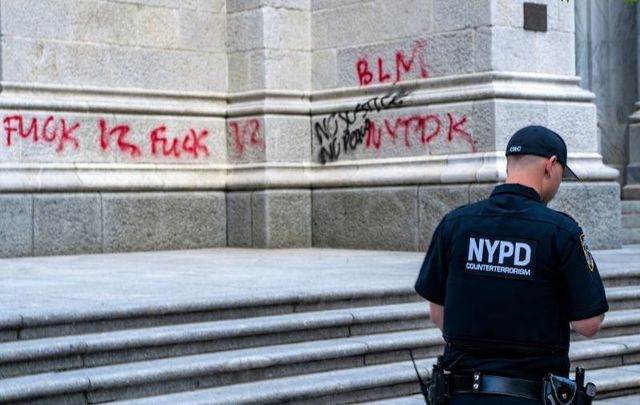 The investigation into the spray paint vandalism at St. Patrick's Cathedral on May 30 is continuing

The Manhattan District Attorney has reportedly declined to prosecute the man suspected of being the getaway driver involved in the recent vandalism at St. Patrick’s Cathedral in New York City.

NYPD's Midtown North precinct confirmed in a tweet on June 6 that an individual had been arrested in relation to the vandalism that occurred on May 30 at NYC's St. Patrick's Cathedral.

#BREAKING: One individual has been arrested in connection to the vandalism of St. Patrick’s Cathedral. The investigation is ongoing. pic.twitter.com/UV0xSQiPP6

According to the New York Daily News, the individual arrested during the early hours of June 6 was a 26-year-old male from Queens.

The NY Daily News goes on to report that prosecutors decided later in the day on Saturday not to charge the man with criminal mischief and making graffiti. The incident remains under investigation.

On May 30, two people were captured on surveillance video spray painting the exterior of St. Patrick’s Cathedral with phrases including “BLM [Black Lives Matter],” “FTP [F*** The Police]," "No Justice, No Peace," "NYPD KKK," and "George Floyd."

Within hours, the graffiti had been removed from the facade of the world-famous cathedral.

Wanted for Criminal Mishief/Graffiti in the Midtown North precinct. Please contact the Midtown North Detective Squad with any information in regards to the pictured perpetrator at 212-767-8415. pic.twitter.com/gRVXAj8dY1

The following day, on June 1, NYPD Crime Stoppers shared photos of the individuals who were being sought in connection to the vandalism and announced a reward for their identities:

On June 5, the day before the alleged getaway driver was arrested, the Manhattan District Attorney’s office said in a statement that "in the interest of justice," it will decline to prosecute arrests made for Unlawful Assembly and Disorderly Conduct during ongoing demonstrations against the use of excessive force and killing of George Floyd.

The statement added that the DA’s Office will “continue to evaluate and decline to prosecute other protest-related charges where appropriate.”

Cy Vance, the District Attorney for Manhattan, said in the statement: “The prosecution of protestors charged with these low-level offenses undermines critical bonds between law enforcement and the communities we serve.

“Days after the killing of George Floyd, our nation and our city are at a crossroads in our continuing endeavor to confront racism and systemic injustice wherever it exists. Our office has a moral imperative to enact public policies which assure all New Yorkers that in our justice system and our society, black lives matter and police violence is a crime.

“We commend the thousands of our fellow New Yorkers who have peacefully assembled to demand these achievable aims, and our door is open to any New Yorker who wishes to be heard.”

A spokesperson for Vance told the New York Daily News that the incident of vandalism at St. Patrick’s Cathedral is still under investigation.

Cardinal Timothy Dolan, the archbishop of New York, addressed the unrest during a mass from St. Patrick's Cathedral on Sunday, June 7. Dolan said: "If we really hold that the person next to me is also a receptacle of the divine life, how could I ever hurt her or him by crushing his neck with my knee or throwing a firebomb into his car or her home or business?"

He continued: “If God thinks so highly of us that he makes his home within us, well, literally for God’s sake, we would only treat ourselves and one another with immense dignity and respect."

You can watch the entire mass from Sunday, June 7 at St. Patrick's Cathedral here: