Northern Ireland leaders will not travel to US for St. Patrick’s Day this year

While First Minister Arlene Foster and Deputy First Minister Michelle O'Neill will not be traveling to the US for St. Patrick's Day, it remains unclear whether or not Taoiseach Micheál Martin will be. 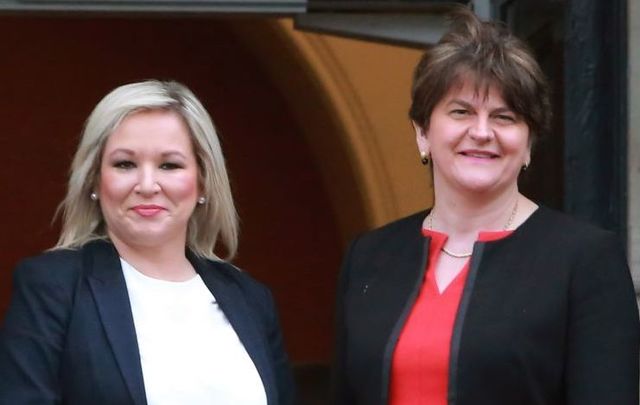 “Due to the ongoing public health emergency, Executive Office Ministers will not be traveling this year to the United States over the St Patrick’s Day period," a spokesperson for the Northern Ireland Executive said on Friday.

The confirmation comes as all of Northern Ireland remains under a strict lockdown until at least March 5, which includes a “stay at home” order.

The Deputy First Minister & I have decided not to travel to Washington for the St Patrick’s Day receptions. Whilst it is an enormous opportunity to showcase Northern Ireland in DC, our priority is dealing with the spread of Coronavirus. We will attend the cobra meeting tomorrow.

While Northern Ireland’s ministers won’t be heading stateside in March, it remains unclear whether or not politicians in the Republic of Ireland will be making the journey, though they remain openly optimistic.

In September, Taoiseach Micheál Martin said: “It’s very, very important that we maintain that link, and that tradition, and obviously, it’s all very dependent on Covid, and everything else at the time next March. But we’re very keen as a government that key economic linkages are maintained.”

Later, on January 15, Martin said during a webinar hosted by the Dublin-based Institute of International and European Affairs that "obviously the course of the virus will dictate" whether or not he travels to the US for St. Patrick's Day this year.

He added: “When I invited President Biden to Ireland, he just said, 'try and keep me out.' So it won’t be any lack of enthusiasm on his side.

This week, Simon Coveney, Ireland's Minister for Foreign Affairs, when asked if he thinks the annual visit will happen this year, said: “I think it will. But we have to figure out how we do St Patrick’s Day this year safely.

“As we know, parades have already been canceled. But we will reach out in the most appropriate way we can, in the most impactful way we can, obviously while being sensitive to public health perspectives.”

He added: “St Patrick’s Day is an extraordinary and unique opportunity that Ireland has.

“We make the most of it every year, and I have no doubt that the interaction between the Taoiseach and the new Irish American presence in the White House, we’ll have a very close and detailed interaction over that period.”

Similarly, Finance Minister Paschal Donohoe told Today FM’s program The Last Word on January 28 that he does not know whether or not the annual visit will go ahead as it depends on the public health restrictions in both Ireland and the US.

"If the invitation is issued, and if the Taoiseach does have the opportunity to travel, if there is a St. Patrick's Day event happening in the White House, I believe the Taoiseach should be at it."

He added: “The economic, the political benefits of the ongoing engagement that we have had with the United States of America is so important to our country.

“If I was to look at what are some of the definitions of essential travel – one of them would be meeting the President of the United States of America for the betterment of our country.

"I don't know if he will travel because it does depend on what the White House decides, but if that event is happening, the Taoiseach, I believe should be at it."

In March 2020, coronavirus cut into then-Taoiseach Leo Varadkar's visit to Washington, DC. The traditional shamrock presentation scheduled for March 12 was canceled, and Varadkar, who was already in Washington, DC, instead hosted a press briefing in which he announced that shutdown measures were to begin back home in Ireland.