NYC St. Patrick's Day parade set to be small but symbolic this year

Organizers for the New York City St. Patrick's Day Parade are determined to have some kind of march on Fifth Avenue on March 17. 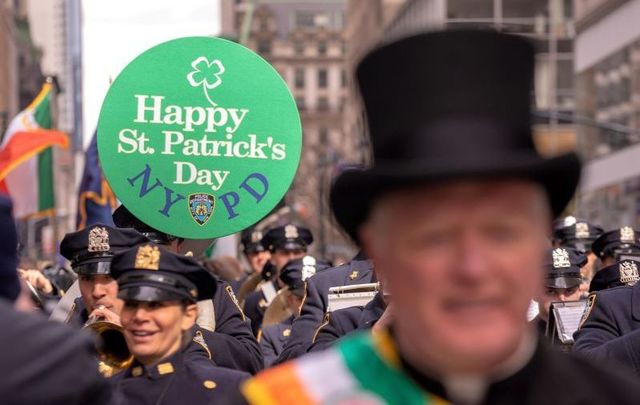 There will be an extremely small but symbolic St. Patrick’s Day parade somewhere in Manhattan on March 17, organizers say, but the vast majority of celebrations will take place online.

With one month to go until St. Patrick’s Day, officials from the New York City parade have outlined plans to mark the holiday and keep the 259-year tradition of an Irish march in Manhattan alive even though public health restrictions will prevent the usual parade with thousands of marchers and spectators from taking place on Fifth Avenue.

In a Zoom meeting with parade delegates last week, parade board chairman Sean Lane and chief administrative officer Hilary Beirne said that discussions are ongoing with Mayor Bill de Blasio’s office about having a small, symbolic march in the city similar to what took place last year in the early hours of March 17 when about 50 parade delegates and members of the Fighting 69th Regiment marched up Madison Avenue to St. Patrick’s Cathedral and then to the American Irish Historical Society on Fifth Avenue.

“We have made it abundantly clear to the mayor and his people that this will be our 260th year in a row. We predate the Declaration of Independence by 14 years. It is absolutely essential that we have some sort of parade,” Lane said.

“We are going to have a very, very small group. We are not sure of the timing yet or where it will start. That is being finalized.”

The select group of marchers will include first responders and essential workers, the two groups that the parade is honoring this year to mark the ongoing pandemic and the 20th anniversary of the September 11 terrorist attack on America. It will not include representatives from any of the traditional groups that march in the parade because of restrictions on the size of gatherings and the limited availability of vaccinations.

The 2020 parade grand marshal, labor leader James Callahan, and the 2020 aides were unable to take part in last year’s truncated march, and the same will hold true for 2021. Callahan and all of the aides will hope for third-time lucky as their positions will carry forth for 2022, Beirne confirmed.

The annual March 17 morning Mass at St. Patrick’s Cathedral is also up in the air as far as live attendance. The cathedral hosts a limited number of Masses at 25 percent capacity, but parade organizers have not yet been given further information on a time or how many attendees, if any, will be permitted. The Mass will be broadcast live on the Catholic Faith Network which is available online.

WNBC, the parade’s long-time TV broadcast partner, will air a half-hour special on the parade on the night of March 17 at 7 pm. It will include footage of whatever symbolic march takes place earlier in the day, and footage from past parades.

The parade’s social media operation will produce a one-hour special that will be available throughout the day on its Facebook and YouTube pages. The special will feature interviews with members of the armed services, leaders from the Irish community and other entertainment.

A virtual parade following the pattern of the 2019 line of march will also go live on its website and social channels on March 17. The virtual march will include photos of the groups that were on Fifth Avenue in 2019.

“We will try and engage as many people as possible throughout the world with the social media campaign,” Beirne said.

“And for next year, I can assure you, we are going to have the best and the largest parade ever.”

You can learn more about the NYC St. Patrick's Day Parade on its website.