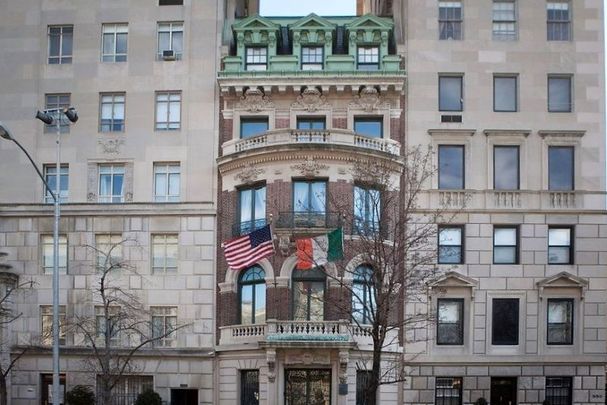 The American Irish Historical Society across from the Metropolitan Museum of Art on Fifth Avenue in New York City is up for sale.

“The American Irish Historical Society is placing its present headquarters at 991 Fifth Avenue on the market," a press release by real estate brokerage firm Brown Harris Stevens said on Tuesday.

"The building, which has been the Society's headquarters since 1940, was designed by James R. Turner and William G. Killian in 1901 as a private residence and has had three previous owners.

"Before moving to 991 Fifth Avenue, the Society was based first at the old Manhattan Hotel, then the Waldorf-Astoria Hotel, and then at 132 East 16th Street.

"The AIHS is a cultural and scholarly organization devoted to making better known the history of the Irish in the United States as well as to celebrating the riches of Irish culture globally.

"The decision to place the building on the market has been made in order to best enable the Society to pursue its cultural and scholarly mission in a sustainable manner."

Broker Paula Del Nunzio of Brown Harris Stevens will handle the purchase of the AIHS headquarters. She told Mansion Global that she expects to draw a buyer as "anything on Fifth Avenue is the holy grail."

The building in Manhattan's Upper East Side has hosted Irish events, including concerts, plays, readings, and more, for decades. Before the shortening of the parade route in 2011, an annual party was hosted as the New York City St. Patrick's Day Parade marched by the building's front doors on Fifth Avenue.

Housing some 10,000 volumes, the building is also home to the most complete private collection of Irish and American Irish history and literature in the United States.

According to the AIHS, “The library features a temperature-controlled rare books room that holds another 1,000 volumes, and an unparalleled collection of newspapers and newsletters dating back to the late-18th century, and several early and mid-19th century newspapers, such as The Nation, The United Irishman, and the Dublin Penny Journal.

The society's "unique collection of letters" from Patrick Pearse and Charles Stewart Parnell are also on hand in the building, as well as works of art from noted Irish artists and an extensive collection of Irish music, including a taped interview with Brendan Behan that became his 'Confessions of a Rebel.'

The five-story building has been closed for live events since the start of the pandemic and has conducted programming online.

A major renovation was conducted in the building from 2006 to 2008 financed in part by proceeds from the Society's annual gala which in the past has welcomed such honorees as Presidents Teddy Roosevelt and  Ronald Reagan, Bono, and Liam Neeson. The refurbishment was carried out under the instruction of long-time President General of the Society Doctor Kevin Cahill.

The society’s mission from its founding in Boston in 1897 has been "to place permanently on record the story of the Irish in America from the earliest settlement to the present day, justly, impartially, fully, and sympathetically correcting neglect and misrepresentation by certain historians of the part taken in the founding, upbuilding and safeguarding of the Nation by persons of Irish birth and descent."