Who lived in the spectacular American Irish Historical Society building?

Census records from the early part of the last century provide a glimpse into the undoubtedly fascinating biographies of these people that, with the help of the public, may become clearer. 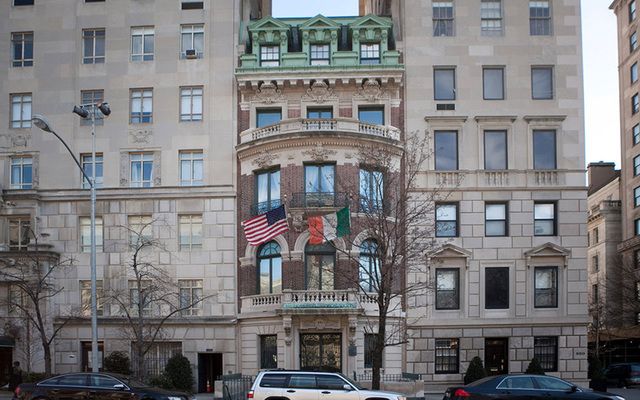 New York society seeks help in tracing the past inhabitant of the wonderful building on Central Park East.

The American Irish Historical Society in New York is currently seeking to sell its magnificent 5th Avenue building in Manhattan, but who lived in the mansion before the group moved in?

Naturally, there is an interest in detailing for visitors the lives of servants and owners alike – especially those of Irish birth or heritage – who lived in the house in the years before it became the society’s home.

Census records from the early part of the last century provide a glimpse into the undoubtedly fascinating biographies of these people that, with the help of the public, may become clearer.

Although it has been difficult to find records of this sort from the time during which the home’s original owners – a widow by the name of Mrs. Mary Augustus King, widow of Edward L. King, and her daughter Mary Leroy King – lived at the address, workers at the Society discovered in 2014 through the 1910 US Federal Census. By this time, a banker named David Crawford Clark and his wife and daughter, lived at 991 Fifth Avenue with their eight servants whose personal information is below (sorted by name, country or city of origin, and year of arrival in U.S. where applicable):

Clark was apparently a partner in a banking firm called Clark, Dodge and Co, as well as a director for the American Agricultural Chemical Company. His wife and daughter shared the name Zelina, and the latter eventually married a Donald Peabody Blagden after her father’s death. While aside from these facts little else is known about these individuals or their servants, the information is enough to draw a general picture about the lives of 991 Fifth’s inhabitants during such an exciting time in American history.

After 1910, the number of servants decreased to two within fifteen years. Despite the changes that undoubtedly forced this downsizing among New York’s elite, an Irish-born husband and wife (who acted as caretaker and cook respectively) still had a home in the house in 1925, when the steel magnate William Ellis Corey owned the residence. According to the 1930 census, it is very probable that this couple, Amie and David Berry, who came to the U.S. in 1905 and 1910 respectively, were the last residents of Irish birth to live in the house. For his part, Corey, whose marriage to the Broadway actress Mabelle Gillman constituted an epic scandal after he divorced his wife for her, was the last resident owner before the Society. Interestingly, although a Pennsylvania native, he was of Irish heritage through his paternal grandparents, and therefore he was himself one of the Irish-Americans whose contributions to American history is celebrated and preserved within the Society. After his death in 1934, the house remained vacant until his son sold the home to the AIHS in 1939.

The back story of the home is enthralling in itself, particularly because of its links to Irish-Americans that predate the Society’s time there. It also serves as a monument to the Beaux Arts style of the period, likely because of its original design by the firm of Turner and Killian and its interior's later renovation by the celebrated architect and designer Ogden Codman, Jr. However, the stories of the servants are especially interesting in an era where shows like "Downton Abbey" draw the attention of viewers to those who lived “downstairs” as well as those who lived upstairs. The developers of the Society’s new tour have already found remnants of the place these individuals had in the home, including call buttons in various rooms designed to summon servants quickly and the back staircase, dark and cramped, that maids used to move quietly from floor to floor. To make the servant experience of 991 Fifth Ave more personal, though, the Society is seeking any information relatives or others may have of past owners and employees alike.