The Auschwitz Museum said TD Mattie McGrath's "instrumentalization" of the tragedy to argue against vaccination is "a sad symptom of moral and intellectual decline.” 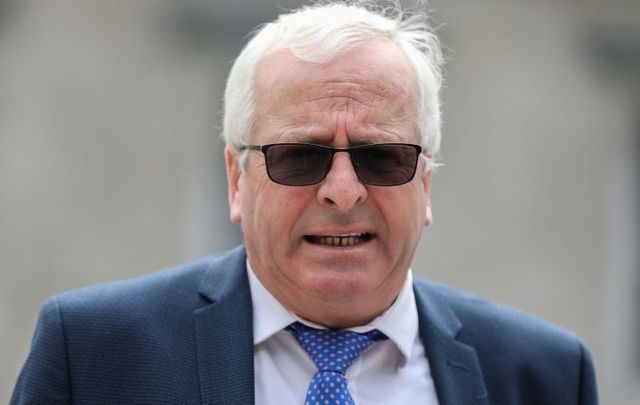 July 13, 2021: TD Mattie McGrath from the Rural Independent Group of TDs, ahead of a private members motion on July 14 calling on the government to immediately allow for the reopening of all indoor hospitality to everyone, whether vaccinated or not. RollingNews.ie

TD Mattie McGrath is facing criticism, including from the Auschwitz Museum in Poland, for likening Ireland's handling of the pandemic to the beginning of Nazi Germany.

McGrath, an independent TD from Tipperary, was speaking alongside members of the Rural Independent Group outside of Leinster House in Dublin on Tuesday. McGrath is opposed to the use of vaccine certifications to allow for indoor dining and other activities.

Speaking to reporters on Tuesday, McGrath said: "Is that where we've come to now, back to 1933 in Germany, we'll be all tagged in yellow with the mark of the beast on us, is that where we're going? I'm surprised at ye."

When challenged on his remarks by a journalist with The Irish Examiner, McGrath replied: "If you study history, and I'm not a historian, you can see what happened in Germany.

"There is huge correlations, it's exactly the same if you want to study it, exactly the same, restriction of movements, couldn't go where they wanted to go, treated like.

“I'm comparing what went on in early Germany and the people had such fear and that's what happened, so I am comparing, yeah, that's for me to compare and for anyone else who wants to read history, make their own decisions on it."

After learning of McGrath’s comments, the Auschwitz Museum in Poland directed the Irish politician to its free online course entitled ‘Holocaust – the destruction of European Jews.’

The Museum added: “Instrumentalization of the tragedy of all people who between 1933-45 suffered, were humiliated, tortured & murdered by the hateful totalitarian regime of Nazi Germany to argue against vaccination that saves human lives is a sad symptom of moral and intellectual decline.”

Instrumentalization of the tragedy of all people who between 1933-45 suffered, were humiliated, tortured & murdered by the hateful totalitarian regime of Nazi Germany to argue against vaccination that saves human lives is a sad symptom of moral and intellectual decline.

Speaking later in the Dáil on Tuesday after making his ‘mark of the beast’ comment, McGrath argued that he has yet to receive copies of the legislation on upcoming health regulations and called for a debate on them.

McGrath said: “The Government has a totalitarian and authoritarian agenda. We are in danger of becoming a checkpoint society where anyone from bouncers, restaurant staff, and gardaí can demand to see our medical papers.

“This is unethical. It is medical apartheid, as I said last week.

“We have been told through briefings that the Minister for Health can, at any time, introduce statutory instruments to allow another group of people to do this. It could be the Army or anybody who decides to do it. I am looking for more time for the debate on this legislation. It cannot go ahead."

Responding to McGrath, Taoiseach Micheál Martin said: “We should refrain from the frequent use of such language.

“In recent weeks, I have asked the Deputy not to keep using terms such as ‘Nazis’ and ‘totalitarianism.’"

McGrath said he did not use those terms, and the Taoiseach retorted: “The Deputy did previously. He consistently makes ridiculous assertions in this House that insult and are offensive to people.

Incensed, McGrath replied: “I never mentioned the Holocaust. Words are being put into my mouth, a Cheann Comhairle. I did not use the word.”

“That is what Nazism was about,” Martin said, to which McGrath reiterated “I never uttered that word - not here or anywhere else.”

Later in the day on Tuesday, McGrath said in a statement: “I will not be lectured to by this Taoiseach, any member of his government or indeed any member of this Dáil when they continue to insist that I am engaged in false equivalences on this matter.

“I have never used the word ‘holocaust’ despite the misleading assertions of the Taoiseach and others.

"Yes I have described the government’s railroading of draconian, discriminatory, and profoundly unethical legislation on this issue as reminiscent of the early Nazi era, however, I was using the term as a way to describe a certain kind of political environment where fundamental constitutional and legal principles are eroded and where a system of enforced segregation is imposed on people under a veneer of democratic legitimacy.

“In this sense, it should be clear to all that what is happening this week is a travesty of the democratic process. The entire political opposition and anyone with their eyes open at all can see that this is the case.

“It is also clear to me that this new system will be authoritarian and indeed totalitarian in nature. How else should we describe a system that is purposefully designed to be severe, potentially criminalising, and all-encompassing?

“The entire might of the state is being pressed into service against those who only want to be able to access basic services without having to be made to forcibly disclose private personal information or to be coerced through social pressure into receiving a vaccine which they have medical or ethical concerns about.

“This is targeted and punitive action and it is totally unacceptable.

Tuesday was not the first time McGrath likened Ireland to Nazi Germany. Speaking in the Dáil on April 28, McGrath said: "Are we going back to Hitler's time? What the hell is going on here?"