Disorder in Dublin ahead of Ireland's reopenings

The Republic of Ireland enjoyed lots of reopenings on Monday, but not before gardai intervened on outdoor crowds in Dublin over the weekend. 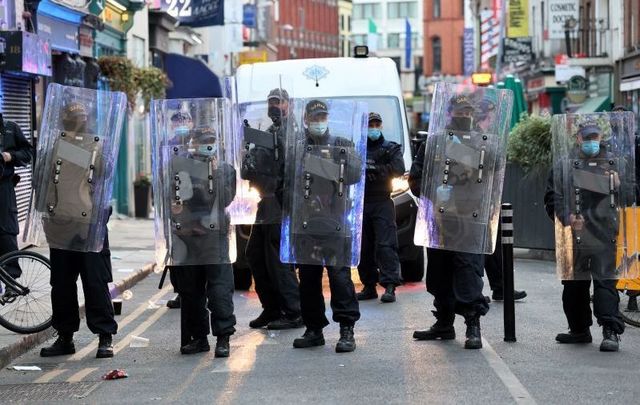 June 5, 2021: Members of the An Garda Siochana Public Order unit move on crowds of people in Dublin City Center on Saturday night in Dublin. RollingNews.ie

Ireland, and in particular its capital city Dublin, is awash with joy this week.

But the celebration follows a weekend of violence when gardai patrolled behind protective shields and, at one stage, baton-charged troublemakers.

Three nights of public disorder in Dublin city center on Friday, Saturday, and Sunday were quickly followed by Bank Holiday smiles and cheers as Ireland opened up on Monday.

For the first time in 15 months, about 4,000 so-called “wet” pubs were open for service outside, bringing back about 25,000 employees to the workforce.

Vintners Federation of Ireland Public Affairs manager Brian Foley told the Irish Sun, “There’s been a real buzz today as pubs opened for outdoor service. It’s great to see pints being pulled all around the country again. The good weather certainly helped the first day back.”

Cheerful revelers restricted to drinking at home from supermarket beer cans during the pandemic posted photographs of their first creamy pints of draught Guinness on the internet.

In Sligo, former Senator Imelda Henry, who runs the Blue Lagoon bar, had 250 bookings for her beer garden.

She told The Irish Times that she had butterflies in her tummy akin to those she experienced on the morning of her wedding.

It was a glorious start to reopening day after the weekend violence in Dublin when gardai arrested nearly 50 people and, on Saturday night, used batons to clear crowds. Three gardai were injured during the violence.

Acting Justice Minister Heather Humphreys defended the garda action. She said the vast majority of people were enjoying themselves over the weekend but a tiny minority was intent on causing trouble.

She pledged that the gardai were carrying out a duty to ensure Ireland’s streets would be safe when the hospitality sector reopened.

Humphreys said, “An Garda Siochana, as they have been doing, will continue to engage with local authorities, businesses, and community groups to ensure that the hospitality sector can reopen safely and stay open safely.

“We have made so much progress in tackling the virus and we must not put the further reopening of our society and economy at risk.”

As the Covid restrictions eased countrywide, restaurants, cafes, and bars reopened for outdoor dining. They will be allowed indoor service from July 5.

Hotels that reopened this week are allowed to serve residents indoors. Gyms, swimming pools, and leisure centers are open for individual training only, while non-professional outdoor sports matches can take place once again.  Also allowed to reopen are cinemas and theaters.

A maximum of 100 people can attend organized outdoor events, although up to 200 can attend outdoor venues with a minimum accredited capacity of 5,000.

Taoiseach Micheál Martin on Tuesday said the Republic’s vaccination program is continuing apace in an effective and efficient manner, with three million doses given in total.

Martin said that almost 55 percent of the population have had a first dose of coronavirus vaccine and that nearly 26 percent of people, who had second jabs, are vaccinated fully.

He issued his progress bulletin on the vaccination program via a Twitter video. He also said considerable credit is due to those involved in efforts to vaccinate the population.

“Tremendous tribute” must be paid to all those who are playing their part, said the Taoiseach.