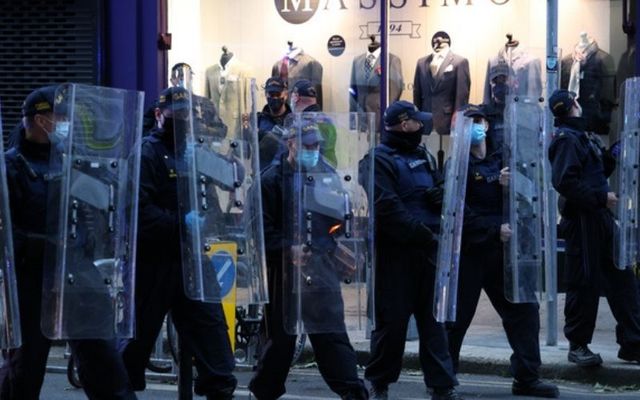 In a statement, gardaí said that they dispersed large crowds from South William Street, St. Stephen's Green, and Temple Bar between 7 and 9 p.m. on Saturday.

They said that multiple glass bottles were thrown at officers as they attempted to disperse crowds on South William Street at 9 p.m. and said that a ban was also set on fire on the same street.

One person, who was not a member of a group taking part in public order offenses, was assaulted and taken to hospital, while two officers were also injured. Groups also caused damage to a Garda patrol vehicle.

Of the 19 people arrested, six received the adult caution and ten were charged with public order offenses and will appear in court at a later date. One further person was released pending a summons for public order offenses, while the two juveniles were released and referred for Juvenile Diversion Programme.

Gardaí said that more glass bottles were thrown at the Public Order Unit as they dispersed crowds in Temple Bar at about 10:15 p.m.

Officers deployed shields to seal off Dawson Street from the public, while uniformed gardaí formed a cordon to prevent the public from accessing Grafton Street.

The heavy-handed approach from An Garda Síochána has drawn criticism from Irish opposition TDs.

Spoke with Garda Commissioner to raise my deep alarm at scenes in Dublin City centre last night. An outdoor summer cannot mean baton charges on our streets. We need proper joined up planning to facilitate safe social enjoyment and safety for Gardai. All agencies must engage now.

People Before Profit has previously protested against Dublin City Council's controversial decision to fence off a number of popular public spaces on weekends.