Laurita Blewitt, a cousin of President Joe Biden, and Joe Brolly had their wedding in Co Mayo on Saturday. 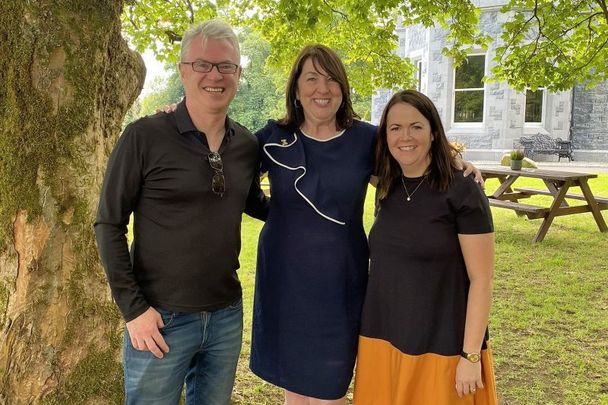 US Ambassador to Ireland Claire Cronin has extended warm wishes to Laurita Blewitt, an Irish cousin of US President Joe Biden, and her new husband, GAA pundit Joe Brolly, on their wedding.

About 100 guests were in attendance for Saturday's wedding, including Tommy Tiernan and Hector O'hEeochagain, Blewitt's co-hosts on the "Tommy, Hector & Laurita Podcast," one of Ireland's most popular podcasts.

Both Blewitt and Brolly enjoy a close relationship with Blewitt's cousin US President Joe Biden, mainly stemming from their work for the Mayo Roscommon Hospice Foundation -  Brolly is an ambassador for the organization, Blewitt is a donor relations manager, and Biden was on hand for the hospice's groundbreaking as a private citizen back in 2017, about a year after he made an official visit as Vice President to Ireland.

This year, Blewitt and Brolly met up with Biden in Washington, DC for the St. Patrick's Day celebrations.

Biden did not attend the Irish wedding over the weekend but he was expected to send a message of good luck to the couple.

On Monday, US Ambassador to Ireland Claire Cronin, who was nominated to her post last year by President Biden, met up with the newlyweds in Ballina, Co Mayo, and offered them her congratulations:

Thank you Ambassador for a wonderful day. And not a bad pint either. pic.twitter.com/kZ86xSkB9t

Cronin was in Co Mayo for the latest stop on her so-called "pub diplomacy" tour, which took her to Rouse’s Bar in Ballina, which has historic links to President Biden's Irish ancestors:

As part of my #pubdiplomacy I visited Rouse’s bar in Ballina. I met Pat and Mary Rouse and their daughter Fiona, who have such a fabulous establishment. Highly recommended, and the back wall was built by the anscestors of @POTUS! pic.twitter.com/DKZscNaJ5g

Cronin also met up with more of Biden's cousins, including Joe Blewitt who seized the opportunity to make his cousin's White House run a clever advertising gimmick in 2020.

I finally got to meet the Mayo cousins of @POTUS! So great to meet the Blewitt’s, @lauritablewitt Joe and Brenda! pic.twitter.com/zwm7sQPfJA