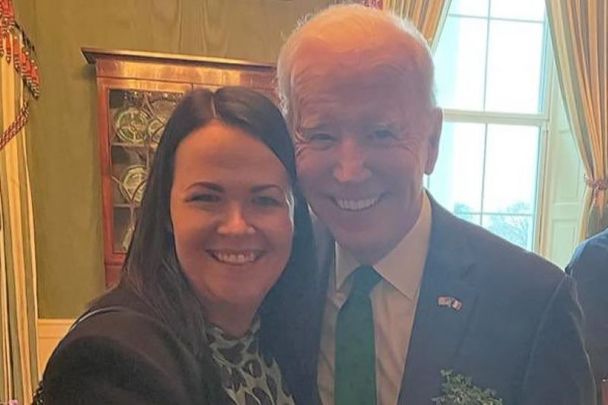 Laurita Blewitt and her fiancé Joe Brolly enjoy a close relationship with her cousin US President Joe Biden, mainly stemming from their work for the Mayo Roscommon Hospice Foundation.

“He and Laurita are a great couple, and very happy together," one of Brolly's friends told the Irish Mirror.

“They are getting married in her native Mayo and it should be a great weekend. All their close friends in the GAA and showbiz world are going.

“Joe is one of the best, a very decent and clever guy who always calls a spade a spade whether it is in the courtroom, on the sports pitch, or the political arena.”

Brolly, 53, and Blewitt, 38, were both in attendance for the St. Patrick’s Day celebrations in Washington, DC this year.

Brolly shared a snap of him and Biden on Twitter:

Brolly, Blewitt, and Biden have all been involved with the Mayo Roscommon Hospice - Brolly is an ambassador for the organization, Blewitt is a donor relations manager, and Biden was on hand for the hospice's groundbreaking as a private citizen back in 2017, about a year after he made an official visit as Vice President to Ireland.

A year ago this very day the Blewitt's welcomed the Biden cousins to their ancestral home @JoeBiden here's the moment we met #family pic.twitter.com/WESACwAHAG

Around the same time as the groundbreaking in 2017, Biden met with Brolly and gave him "his specially designed vice-presidential cufflinks" for his work with organ donation, Belfast Media previously reported.

Later, Blewitt spent a couple of weeks on her cousin's campaign trail before the Covid-19 pandemic forced her to head home to Ireland. Blewitt has said that Biden “has a great love for Ireland.”

It was amazing to see the hundreds (both inside and outside) who came out tonight to show their love and support for @JoeBiden in Las Vegas #TeamJoe #JoeBiden2020 and I loved being introduced to the crowd. pic.twitter.com/cUC58o69AN

After Biden was elected President in November 2020, Brolly revealed: "I was very privileged to be on a speaker call with the (Biden) family in their home in Delaware the day after the election had been called.

"Basically I said congratulations. I got to know him through the (Mayo) Hospice and we've become friendly."

Later, in 2021, President Biden recorded a special message for the Mayo Roscommon Hospice upon its opening.

Biden is expected to send another special message to Brolly and Blewitt for their upcoming wedding.