The Irish American former Vice President will turn the sod of a new hospice facility where his Irish cousin works. 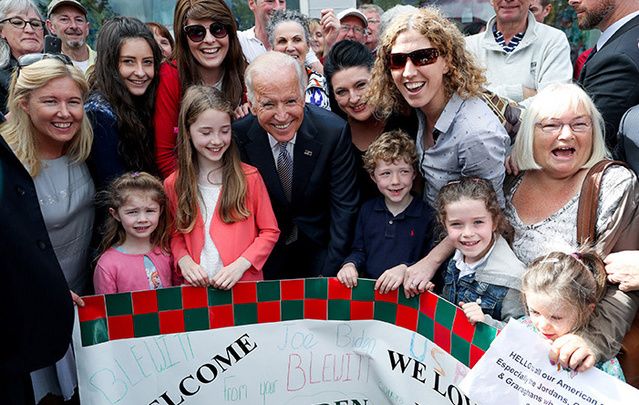 The Irish cousins of former Vice President Joe Biden have called in a family favor this week to bring the Irish American politician back to his ancestral home of Mayo for a sod-turning ceremony. Biden, who has Irish roots in Ballina, Co. Mayo, and in Co. Louth, will preside over the official ground-breaking ceremony of the new Mayo Roscommon Hospice unit where one of his Irish cousins works.

The former Vice President had already promised his cousin Laurita Blewitt that he would lend support to the hospice when the pair met for the last time in January 2017 and true to his word, Biden is returning to his ancestral home for the second time in just over a year to visit the beginnings of the construction of the unit.

“He said he would like to help raise funds for Mayo/Roscommon Hospice,” Blewitt told the Mayo News back in January, after visiting Washington D.C. to watch her American cousin receive the Medal of Freedom in a surprise ceremony watched my family, friends, and staffers.

“His mother died of cancer and used palliative care services, and his son Beau died from brain cancer in 2015,” she explained.

Read more: Joe Biden shares why coming home to Ireland meant so much to him

Biden previously visited Ireland in his official capacity as US Vice President in June 2016 for a five-day trip accompanied with his children and grandchildren to meet with Irish leaders and reconnect with his Irish ancestry.

The Irish American politician is fifth-eighths Irish with connections on both his mother and father’s side. He has often spoken with pride of his strong Irish roots and how much stock he has held over the year by his Irish values. Despite several stopovers in Shannon airport and a long-unused open invitation to the country, however, it wasn’t until last year that Biden eventually managed to make the trip.

Biden’s first visit to Ireland was chronicled by Ancestry.com who followed the then-Vice President as he explored his family history on what he has described on an extremely meaningful, personal journey.

“I’ve been a lot of places,” Biden wrote.

“I’ve traveled all around the world – more than a million miles on Air Force Two alone. I’ve been honored to have held a lot of titles. But I have always been and will always be the son of Kitty Finnegan.”

The sod-turning ceremony will take place next Tuesday, September 12, at the site of the new hospice unit at Knockaphunta, off Westport Road, Castlebar.