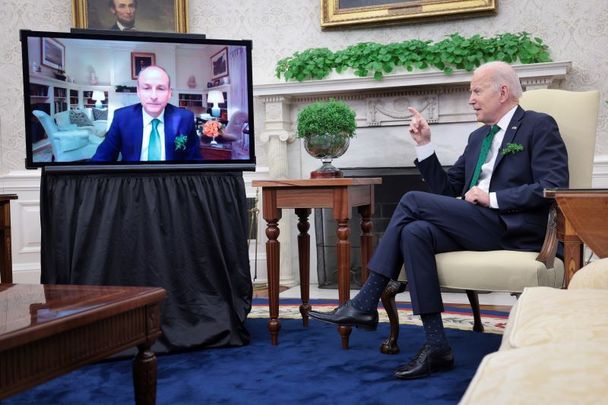 March 17, 2022: US President Joe Biden meets virtually with Taoiseach Micheál Martin in the Oval Office of the White House in Washington, DC. St. Patrick's Day events with Taoiseach Martin are being held virtually after it was announced last night that he had tested positive for COVID-19. Getty Images

The two leaders were set to meet in person for St. Patrick's Day at the White House on Thursday, but the Taoiseach tested positive for COVID-19 late last night, March 16, upending the St. Patrick’s Day plans in the Capitol.

President Biden said in a tweet on Thursday morning that he would be meeting virtually with Taoiseach Martin:

On this St. Patrick’s Day, I’m hosting a virtual bilat with Micheál Martin, Taoiseach of Ireland. I look forward to reaffirming the close and historic partnership between the United States and Ireland and the extraordinary bonds between our people.

The virtual bilateral meeting will be streamed online:

Happy St. Patrick’s Day. Nearly one in ten Americans claim Irish roots—including @POTUS. Yesterday, I spoke with Taoiseach Micheál Martin and talked about the strong ties between the U.S. and Ireland, and the American and Irish people. Today is about celebrating these ties. pic.twitter.com/IcsEZel41i

“The leaders will reaffirm the close and historic partnership between the United States and Ireland and the extraordinary bonds between our people. They will discuss their countries’ contributions to the international effort to support the people of Ukraine and to impose costs on Russia for its unprovoked and unjustified war.

"They will also talk about a range of global issues and shared priorities, including combatting the COVID-19 pandemic worldwide, strengthening global health security, tackling the climate crisis, and working together on the United Nations Security Council.

“In addition, they will discuss their continued support for the Good Friday Agreement (also known as the Belfast Agreement)."

Speaking last week ahead of his meeting with Biden, the Taoiseach said: "Obviously we will discuss the Ukrainian crisis, that will be a key one.

"I think the importance of President Biden's agenda from the outset of really doing everything we possibly can to support democracies and human rights - which I think he has called out at the commencement of his presidency, when he said the world is polarising between democracies and authoritarian regimes.

"It's an opportunity to reset the Irish-US economic, and how that's maturing and evolving in respect of the number of Irish companies who are investing in the US - creating jobs in the US.

"And of course the American multinational companies who make such an enormous contribution to the Irish economy."

Elsewhere, the Ancient Order of Hibernians (AOH), the oldest and largest Irish Catholic organization in the US, is expecting the Taoiseach to raise the issue of Irish access to the E-3 visa scheme with the President.