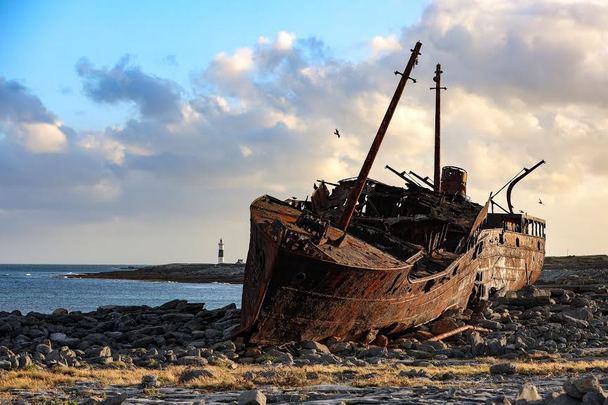 The wreck of the Plassey, a famous landmark on Inis Oirr. Cormac Coyne

Acclaimed Irish comedian, actor, and chat show host Tommy Tiernan has made a beautiful 90-second video to highlight the peace, tranquillity, and stunning natural beauty of a Gaeltacht island off the west coast of Ireland.

Tommy Tiernan, star of ‘Derry Girls’ on Netflix and the host of a popular chat show on RTE One television, is urging people to enter a draw for a fabulous prize of a five-night holiday for four people on the smallest of the Aran Islands.

The fundraising draw is to support the most westerly arts center in all of Europe, which has been supporting the creation of great art on Inis Oirr, County Galway, for the past 21 years.

As Ireland reopens for “staycations” following months of lockdown, there is bound to be huge interest in the prize of a self-catering holiday, with transport from the mainland and a host of extras included, on the small island.

Unfortunately for North American readers, return flights are not included!

But Tommy’s video should give a taste of the stunning scenery, distinctive landscape, and magical atmosphere of the Irish-speaking island which is home to just 240 people, for those who are making plans to travel again next year.

“One of the most beautiful places in the whole wide world,” says Tiernan in his video. “A small, magical, Gaeltacht island off the mouth of Galway Bay. To the north of me is Connemara, to the west the wild Atlantic Ocean, to the south the beautiful Burren.

“It is sometimes the small things in the smallest places that have the most magical effect.”

Tickets for the draw cost just €10. Funds raised will help Aras Eanna Ionad Ealaíne, the island’s arts center, to continue inspiring great art by visiting artists and musicians as it celebrates its 21st birthday in 2021.

Included are a return ferry or airplane from the mainland and a selection of prizes sponsored by local businesses, with a fully stocked fridge, a seaweed bath and spa voucher, bike hire, fuel, and a horse and cart trip around the island. The lucky winner will be drawn on July 17.

In many ways, the development of an arts center on this tiny Gaeltacht island was something of an “accident of birth” back in the year 2000.

This retreat for artists, art gallery, and concert and theatre venue was originally built to become a weaving factory in the 1980s. But the factory never opened. 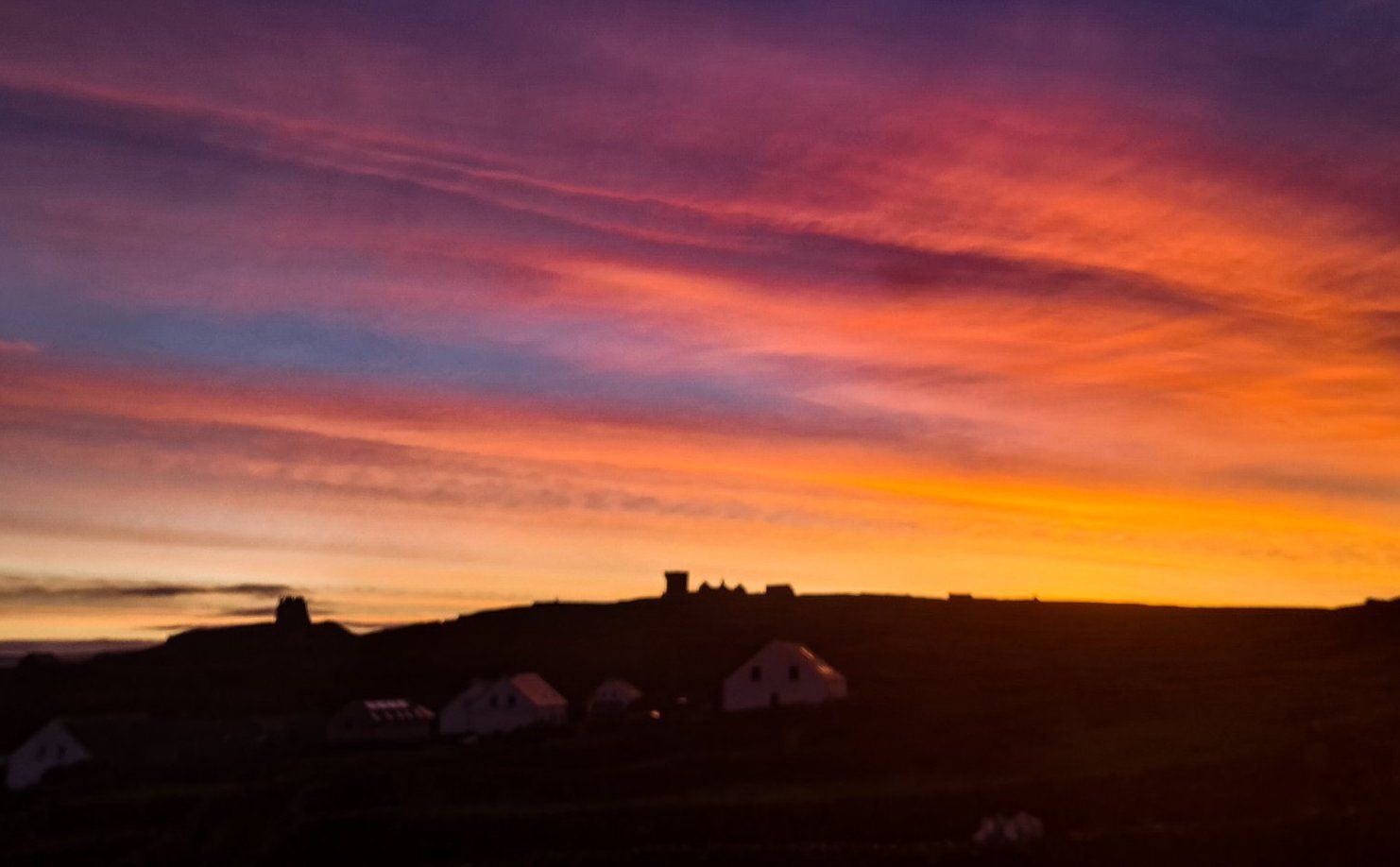 An artist called Mick Mulcahy spent time working on the island in the late 1980s and a group of Galway-based arts enthusiasts, including current President of Ireland Michael D. Higgins, encouraged him to show his finished work to the local community in the empty factory building in 1990.

Their decision to showcase his work on the outskirts of the island’s main settlement sowed the seeds for the venue to be transformed into an arts center a decade later.

Few other artists’ retreats in Europe can match the spectacular landscape, the peace, and tranquillity, and the beautiful but fragile language and culture of Inis Oirr, a place where you can still hear the Irish language being spoken by locals every day.

The island boasts stunning, peaceful walks, with amazing views of the Cliffs of Moher in Co Clare and the other two Aran Islands. Visitors can spot the mountains of Co Kerry to the south on a clear day and locals point out that “the next stop is Boston” when visitors escape to the isolated west coast of the island.

With a white, sandy beach; distinctive stone walls, and excellent accommodation and eating options in the small main village, it’s easy to understand why the same people return to the unspoiled island every year.

If anything, the coronavirus pandemic has boosted the popularity of such a quiet, peaceful place on the edge of Europe when visitors are delighted to escape the hustle and bustle of big cities.

The Artistic Director of Aras Eanna, Dara McGee, is busy planning the 21st birthday celebrations in July. McGee has been delighted by the success of the center’s first-ever fundraising draw so far after being taken aback by the support he received from local businesses.

“This year we decided, because we are increasing our program with visiting artists, we would try to raise some funds. We have put together a fantastic package with local businesses on the island for a five-night holiday, with a self-catering house, and a whole host of extra treats thrown in, sponsored by local businesses,” said McGee.

“The main draw for an artist here is the island itself, the environment and sheer beauty of the island, the stone walls, it’s a very magical and inspirational place. There is something about being on an island as well, being away from the mainland, which gives you that isolation and time to think, a chance to give yourself influence and inspiration for your work.”

Although the building was not originally intended to become an arts center, artists from all over Ireland and beyond have come to love Inis Oirr as a place to find inspiration, work on new projects, and get away from it all over the past 21 years.

“This year is very special. We were hoping to celebrate our 20th-anniversary last year, but with the Covid19 restrictions we decided that now is the time to celebrate as Ireland begins to open up again,” said McGee.

The 21st birthday celebrations will include three simultaneous outdoor exhibitions, a concert featuring the best of the island’s local musicians on the Gaelic football pitch, and shows by artists who have enjoyed time out on Inis Oirr over the past 21 years.

McGee is hosting three separate exhibitions all around the island in July, using outdoor spaces to fully comply with the coronavirus restrictions while showcasing the talents of local island residents and 21 artists from all over Ireland.

Like many West of Ireland communities, the Aran Islands have been hit hard by emigration over many years, but sustainable tourism has transformed the economy in recent years as people seek out beautiful places off the beaten track while enjoying the hospitality of the friendly locals. 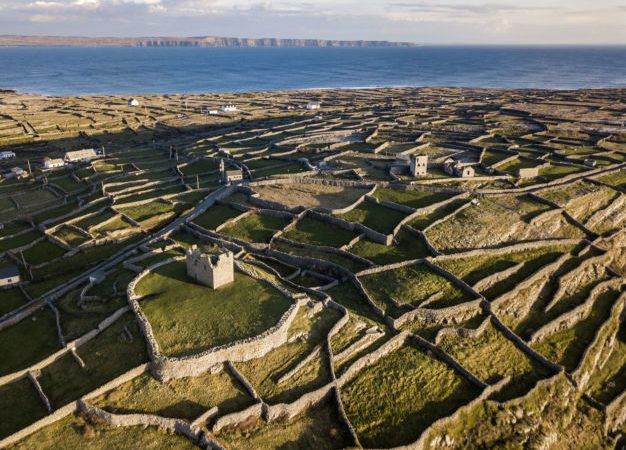 The stone walls of the island, by Cormac Coyne.

“During the summer, there can be the hustle and the bustle down around the main village and the harbour, but you can then go half a mile around the back of the island and you are on your own,” said McGee.

“If you walk around the back of the island, it is just another world. So Inis Oirr is very special that way, with the beauty of the island, the language, the people, and the culture. The next stop is Boston as they say around here!”

You can win a five-night holiday on Inis Oirr by entering the draw at www.idonate.ie.

* Ciaran Tierney is a digital journalist, tourism officer, and an award-winning current affairs blogger. Find him at CiaranTierney.com and on Twitter @ciarantierney

Cormac Coyne is a photographer and schoolteacher who lives on the beautiful island of Inis Oirr.