West Side story? Take a walk on the wild Irish side

Tom Deignan ponders the possibilities for a modern, Irish take on "West Side Story." 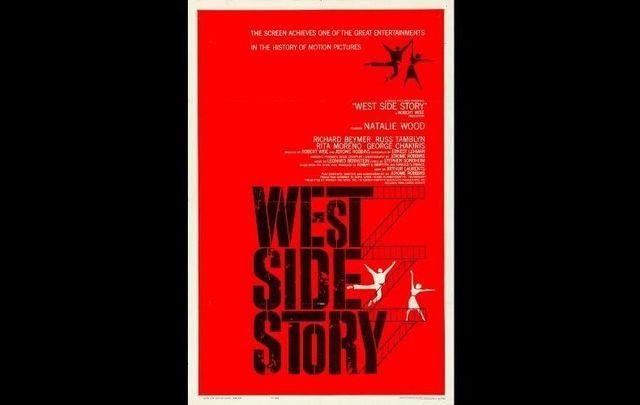 The theatrical poster for the 1961 film version of "West Side Story." Public Domain

*Editor's Note: This column originally appeared in the September 9 edition of the Irish Voice newspaper, sister publication to IrishCentral.

By December, you might finally decide to sit in a movie theater and watch a new version of West Side Story, directed by Hollywood heavyweight Steven Spielberg.

At this point, I’m not sure what sounds more depressing: sitting masked and far away from the seven or so other people allowed into this dark movie theater, wondering why the floor is somehow still sticky, struggling to eat popcorn or Goobers. (Damn this mask!)

Or, watching those not-very-scary Sharks and Jets snap their fingers and hop about Manhattan, in a day and age when the streets are teeming with fire, rage, and bros with itchy fingers on automatic weapon triggers.

True, West Side Story wags will tell you that Spielberg is updating this classic. Which means that, at best, this will be a 73-year-old man’s version of what teenage love and gang warfare looks like.

The presidential election is already forcing us to see the world through the eyes of 70-something year-old men. I’m not sure we need a new version of West Side Story along with that.

If Hollywood folks really want to give us a new spin on this old classic, they should go back to the original source material. No, I don’t mean Shakespeare, even though West Side Story is a kind of urban Romeo and Juliet.

I mean the original musical idea. East Side Story. With the star-struck boy as an Irish kid from the Lower East Side.

A new book reminds us that before the Sharks were Puerto Rican and the Jets a motley melting pot of Ellis Island offspring, this musical was going to have very different characters.

Director Jerome Robbins was “the single most essential person in the entire saga of West Side Story,” writes Richard Barrios in the new book West Side Story: The Jets, the Sharks and the Making of a Classic.

By 1948, Barrios adds, Robbins wanted to make a new version of Romeo and Juliet. “The feuding Montagues and Capulets, for example, could have an equivalent in something as timely as the ongoing conflict between Jews and Catholics living on the East Side of Manhattan,” he wrote.

Sure, it might sound a little dated. Barrios himself notes that Robbins, lyricist Stephen Sondheim, and author Arthur Laurents, ran into artistic roadblocks when they realized this material had been mined once or 1,000 times, most famously in the celebrated musical Abie’s Irish Rose.

Still, I think a movie about Catholic and Jewish toughs would hit a whole bunch of key demographics.

First, it would aggravate both liberals and conservatives. For example, it’s a source of great comfort to Fox News viewers that Irish Catholic guys named Hannity get along so swimmingly with Jewish Trump sidekicks like Stephen Miller or Jared Kushner. Let’s see how they feel when they rumble Belfast style!

Meanwhile, liberals would be flummoxed by all these white folks snapping at and stabbing each other. How will they know who to root against?

Finally, think of how uncomfortable this could all get, all of the stereotypes you would either have to avoid, or try to reverse.

The opening scene might have a pub owner named, um, Abraham. And he’s chatting with the beat cop, Yankel, who is over the moon because he just sent his daughter Rebecca to Notre Dame.

But look! Here come those troublemakers Kevin and Patrick, the pickle briners from O’Halloran’s Delicatessen.

Once the pints and knishes start flying, and Patrick and Yankel face off in a fight that is Riverdance-meets-Hava Nagila, this stuff writes itself!

On a separate note, a lot of people in 2020 America could stand a reminder that, unfortunately, racial and ethnic tensions are not exactly new, and not too long ago, immigrants from Ireland and Eastern Europe were the ones packed into poor cities, struggling to make ends meet, fighting each other, griping about ill-treatment at the hands of the police.

One thing -- why did the Irish automatically make this an “East Side” story?  Ain’t none of these people ever heard of the Westies?