Last man standing at Fox and firm favorite of President Donald Trump, talks about his Irish heritage, his career and why he thinks the 45th POTUS has made America great. 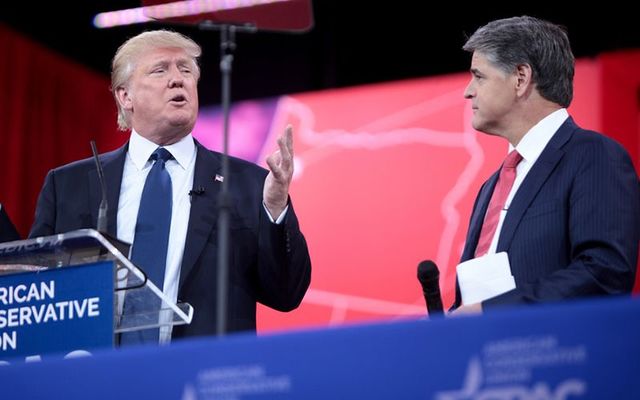 Last man standing at Fox news and a firm favorite of President Donald Trump, talks about his Irish heritage, his career and why he thinks the 45th POTUS has made America great.

Sean Hannity has a very good friend who owns a gorgeous golf course and resort in Doonbeg, County Clare that hugs the Atlantic coastline.  The proprietor, President Donald Trump, would undoubtedly hook Hannity up with a round or two and luxury accommodations, but the biggest star on Fox News, much and all as he loves golf and his Irish heritage, can’t squeeze in a trans-Atlantic trip.

“One day we’ll go together and your headline will be ‘Hannity Heads Back to Ireland,’” the grandson of four Irish immigrants told the Irish Voice during a recent interview.

“You want to know something? This is just the truth. I had no money in my early adult life, $200 to my name, maybe less, and I had time to do stuff. Now I have a little bit of money and no time at all.  The last three years I’ve barely lifted my head up because work is so busy.”

That’s putting it mildly.  Sean Patrick Hannity, 56, is one of the original Fox News personalities, his fortunes rising in tandem with the conservative news network that debuted in 1996.  He was always high atop the Fox News pecking order, but since Bill O’Reilly was toppled last year by multiple sexual harassment charges, and Megyn Kelly departed for a fat contract and lukewarm ratings at NBC, Hannity has become the Fox News standard bearer and its highest-rated host. 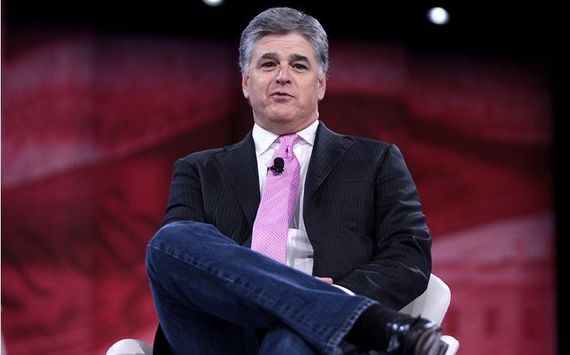 In February his namesake show Hannity, which airs Monday through Friday at 9 p.m., averaged more than 3.3 million viewers.  Rachel Maddow, his MSNBC competitor in the same time slot, had just over 2.8 million watchers.

Hannity started his media career in radio nearly 30 years ago, and his weekday talk radio show is syndicated on more than 500 stations throughout the U.S. (3-6 p.m. on the East Coast).  Its ratings are second only to Rush Limbaugh’s.

And for sure, he’s earned more than a little bit of money for his work.  Last year Forbes pegged Hannity’s earnings at an eye-popping $36 million per annum, a sum which would have been unimaginable to his four Irish grandparents and his parents Lillian and Hugh, who raised Hannity and his three elder sisters in a modest home in Franklin Square, Long Island.  A large chunk of the money they earned – Lillian was a stenographer and a corrections officer; Hugh a family court officer – went towards Catholic education for their kids.

“My parents didn’t have a lot growing up. And they sacrificed. It was a big deal for my father to get out of Bed Stuy in Brooklyn and buy a tiny house on a 50 by 100 lot in Franklin Square,” Hannity says.

“My parents never bought a new car till they got older, and they never took vacations.  I know everybody’s got similar stories regardless of what their background is, but it’s fascinating for me to look back and see my life through the prism of my parents and my grandparents.”

Hannity fondly remembers his maternal grandfather Cornelius Flynn.  “He was an amazing man. He came here and worked his finger to the bone. My mom stood on his shoulders and her mother’s shoulders, and my dad stood on his parents’ shoulders. And I stand on all of their shoulders,” he says.

“All four of my grandparents came from Ireland, counties Down, and Cork, in the middle of the last century.  None of them had any money.  I talk about them often.  I don’t think they came here with any illusion that they were going to be the successful generation. They just came for the opportunity for their families.”

Hannity did an ancestry test that showed his ethnicity to be “100 percent British Isles…meaning Irish, British Isles is their phrase.  And they said it’s very rare that the tests come back 100 percent.”

Now it’s just a matter of getting him over to Ireland for his first ever trip.  He’d also love to acquire an Irish passport, as he’s entitled to through his grandparents.

“It’s funny because everybody in my family has been over but me.  I know I have relatives over there but I’m not sure they are aware of me,” says Hannity.

“It’s a goal of mine to spend some time and get over there.  And I wouldn’t mind seeing the president’s golf course either.”

THE days of Irish natives freely flowing into the U.S., as Hannity’s grandparents did, are long gone.  His thoughts on immigration – and many other issues of the day -- mirror those of President Trump.

“I like the president’s proposal. I believe in the southern wall with a big door. I believe we have to get rid of the visa lottery system,” Hannity says.

“I like what the president proposed in terms of merit-based immigration.  If we just open our doors pretty much everyone from all over the world would come here, and I don’t blame them. But we can’t absorb them all. We have the ability to pick and choose the best and the brightest and it doesn’t matter where you come from, as long as you want to come here and be a part of our family and produce and take advantage of liberty and freedom.” 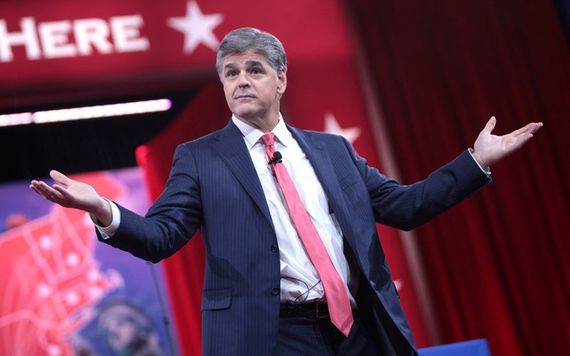 Hannity’s Fox News show is must-see TV for Trump, who has used his famed Twitter account on several occasions to praise the host.  Their mutual admiration society has been beneficial to both – Hannity’s loud and proud pro-Trump broadcasts have propelled his show to record ratings, and Trump, thanks in part to the influence of media cheerleaders like Hannity, scored the biggest political upset ever.

The shock of a real estate developer turned reality TV star who never ran for office winning the White House didn’t surprise Hannity at all.   His disdain for Hillary Clinton is well documented, and he says an establishment shake-up after eight years of President Obama – “13 million more Americans on food stamps…he doubled the national debt!” -- was sorely needed.

“I think there’s a feeling that both parties are corrupt, and they are. I think there is a swamp in Washington and it needs to get cleaned out,” adds Hannity.

“I think the president is very much an iconoclast, but he’s also a very practical, down to earth guy who is in touch with the regular people who make this country great.  And the country is already better off – we have three million more jobs and we are now on a path towards energy independence, and he’s already eliminated more regulations than most presidents get rid of in eight years.

“The election was about the forgotten man and the forgotten woman, and I truly in my heart believe that that’s who it should have been about. Politicians are supposed to serve the people, but in many cases they end up only serving themselves. As one of the president’s sons told me early on, he’s a blue collar billionaire.”

Hannity cites Ireland’s low tax policy for attracting multi-nationals as an example that Trump followed when crafting the sweeping new federal tax regulations which were signed into law late last year.  Shaving tax rates for U.S. corporations is a no-brainer that equals more jobs for Americans, he says.

“I would make the argument that Ireland’s tax policies became so favorable...they were hated by the rest of Europe because they were literally responsible for lowering the rates to the point where they created a great economic boom in Ireland,” he adds.

“The president’s tax plan is going to help explode the economy here.  His repatriation plan will allow multi-nationals to bring trillions of dollars back at a very low rate, and then they are going to invest in factories and manufacturing centers here.” 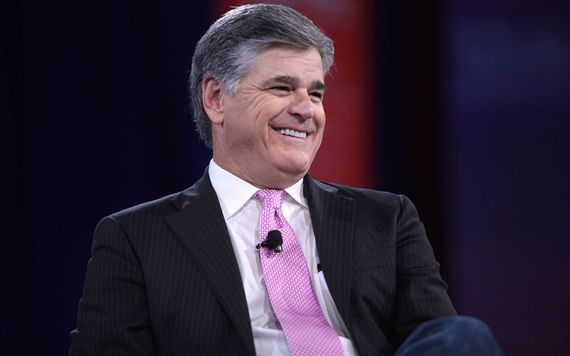 Hannity is a staunch nationalist as his fans are well aware, and he applauds the citizens of the U.K. who voted in favor of Brexit in June of 2016.   Leading Brexiteer Nigel Farage was a frequent guest on Hannity’s radio and TV shows in the lead up to the vote, and though the Brexit implications for the Irish border are unknown and could well be calamitous, Hannity says the U.K. needs to dump the European Union ASAP.

Read more: Rally for American gun reform to be held in Dublin

“Get out, get out fast, get out yesterday. I don’t think the European Union has been particularly fruitful or helpful and it only has the potential to get worse,” he feels.

The next presidential election will come down to two things, Hannity says.  “The issues that drive every election are the economy -- are we better off than we were four years ago? -- and peace in the world. Are we safer as a country, do people like the president’s foreign policy? At the end of the day, that’s what is going to matter.”

What's it like to be Sean Hannity?  It’s never been better.  Though he more or less eschews mainstream media interviews (“I’d rather talk to you!” he tells me), he was the subject of a pretty flattering cover story in The New York Times Magazine last November, with the reporter noting, “To trace the arc of Hannity’s career is to appreciate how deftly he has leveraged two concurrent trends — the rightward tack of the Republican Party and the expanding influence of conservative media — to become power broker, spokesman and arbiter of the Republican base.”

Hannity says he’s humbled by his success, and when asked who could possibly take his perch away he replies, “Hopefully nobody!”

“You know, I keep my head down. I feel very blessed. When I talk about the difficult lives my parents had, it’s absolutely true that I stand on their shoulders. And I work hard. It’s not in my DNA to not get up and put my head down and go to work. And I don’t think I’ll be able to stop until they put me in my mausoleum.”

Hannity and his wife Jill have two teenagers, a son, and daughter, both highly accomplished tennis players competing on a national level.  The Hannitys live in a waterfront mansion on Long Island’s North Shore, and following the kids to their tournaments is his number one pastime when he’s away from his platforms at the end of the week.

“My kids are 19 and 16. I’m flying all over on weekends to watch them, so between that and work it’s crazy. I do like to golf too…golf and sleep,” he adds.

The young Hannitys, their father adds, do their own thing, and he’s fine with that.

“They are still pretty young. I don’t want to be too preachy with them. I don’t drag them into politics a whole lot. I don’t even think my daughter knows what I do for a living!” he says.

March 17 will be a day off for Hannity.  He won’t be marching on Fifth Avenue and never has.

“I’ve watched the parade many times though. When I was a kid I remember going into the city with my grandfather and my mom and my sisters. I’m very green on St. Patrick’s Day!” he laughs.

Corned beef and cabbage is a year-round favorite of Hannity’s; he says he’ll enjoy the meal on the 17th too. “And I will have a drink,” he adds, but then corrects himself.  He gave up alcohol for Lent and St. Patrick’s Day 2018 is on the Lenten calendar.

“Oh no. Note to self like Susan Rice,” he says, mocking President Obama’s National Security Advisor who wrote an email to herself using her government address minutes after Trump was inaugurated, absolving her boss of any wrongdoing in the Russia hacking investigation.

“Don’t give up drink for Lent!”