What's your Irish County? County Down

All the basics, and some fun facts, about County Down. 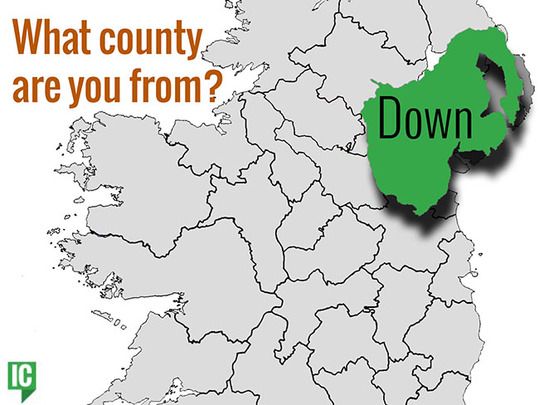 Nickname: The Mourne county, The Ardsmen

Down’s county town, Downpatrick, for which it is named, is one of the most ancient towns on the island of Ireland, with archaeological evidence of Neolithic and Bronze Age settlements. By 130 AD, it was included in Ptolemy’s list of towns in Ireland, though at that time it was still called Dunum (“Dun” means “fort).

Saint Patrick is believed to have been buried in Downpatrick in the year 461, on the grounds of Down Cathedral. Ireland’s patron saint said his first Eucharist on Irish soil in the County Down town of Saul.

From the seventh century on, Down was the center of the lands held by the Dál Fiatach. The Normans arrived in 1177 when John de Courcy received a grant of Ulster from King Henry II.

The Battle of Down, which took place in 1260, pitted Brian O’Neill, King of Tyrone, against the Normans in a bid  for Irish independence. The Normans, whose armies consisted largely of Irishmen, were victorious. Down was, in the past, also referred to as Downshire.

Down is one of only two counties of Ireland to presently have a majority of the population from a Protestant background. (Antrim is the other.) St. Patrick’s Church of Ireland, built in Newry in 1578, is thought to be the first Protestant church in Ireland.

Key attractions: As the great Irish entertainer Percy French wrote, "The mountains of Mourne sweep down to the sea." Indeed, Down’s Mourne Mountains are a key attraction, with Slieve Donard, at 2,785 ft the highest mountain peak in Northern Ireland. The Mourne Wall stretches for 22 miles and crosses 15 of the Mourne peaks. The Doan is an especially popular peak for climbing.

Down is also home to an area called the Brontë Homeland, where Patrick Brontë (originally Brunty), father of Anne, Charlotte, Emily, and Branwell Brontë, was born and raised.

Cities and towns of interest include Downpatrick, Newry and Bangor. Downpatrick is home to the Down County Museum, Inch Abbey – the ruins of a large Cistercian monastery – and what is thought to be the burial place of St. Patrick. In the US state of Maine, there is a town called Bangor and also one called Newry. There is much golf to be played in Co. Down.

Down is home to Exploris, the Northern Ireland Aquarium, located in Portaferry on Strangford Lough on the Ards Peninsula. With its beautiful vistas and wildlife, Strangford Lough is well worth a visit by itself.

A fun fact: The video for Rihanna’s hit song “We Found Love” was filmed in County Down in 2011, though an alternate location had to be found at the last minute when the farmer whose field they were using became upset with how scantily clad the singer was.

Click here to see more stunning photos of County Down.