US Vice President Mike Pence encouraged Ireland to engage in Brexit discussions in "good faith" with the UK. 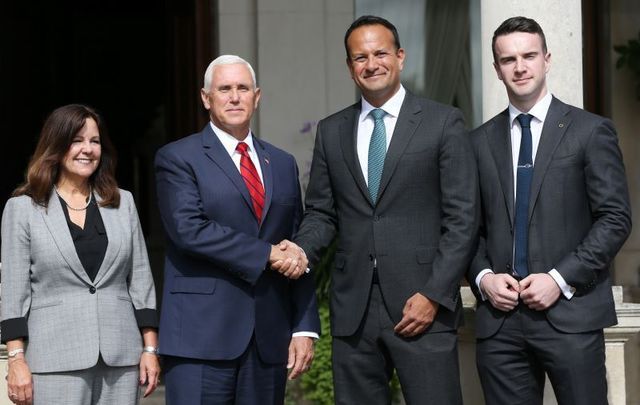 Taoiseach Leo Varadkar used Vice President Mike Pence’s visit to Dublin to give him a firm understanding of the threat to Ireland from Brexit in advance of Pence’s meeting in London later this week with British Prime Minister Boris Johnson.

The Good Friday Agreement and the open border it provided – threatened under Britain’s predicted plan to exit the European Union next month without a deal – were also high on the agenda for talks between Varadkar and Pence over lunch on Tuesday.

Pence expressed concern over the Irish border but said that the U.S. supports the U.K.’s withdrawal from the EU.

The U.S., Pence told Varadkar, “recognizes the unique challenges on your northern border."

“And I can assure you we will continue to encourage the United Kingdom and Ireland, to ensure that any Brexit respects the Good Friday Agreement."

“As the deadline for Brexit approaches, we urge Ireland and the European Union, as well, to negotiate in good faith with Prime Minister Johnson, and work to reach an agreement that respects the United Kingdom's sovereignty and minimizes the disruption to commerce."

Pence also said that the U.S. would do a trade deal with the U.K. after it withdraws from the EU, but did not mention strong opposition to such a deal from politicians back home such as House Speaker Nancy Pelosi and Senator Charles Schumer.

You can watch Varadkar and Pence's entire press conference here:

On Monday, shortly after his arrival at Shannon Airport, Pence received a strong initial briefing on Brexit and the Good Friday Agreement from Tanaiste Simon Coveney.

Coveney said, “I want to thank the U.S. for the role it played in bringing peace to this island but, believe me, it is very fragile.”

Pence specifically mentioned Brexit, and the importance the U.S. attaches to its friendship with both Ireland and the U.K.

He told Coveney, “We will continue to work closely with our partners in Ireland and the U.K. to support a Brexit plan that encourages stability and also one that keeps the strong foundation forged by the Good Friday Agreement.”

Welcome to #Ireland ⁦@VP⁩ Mr Vice President - thank you for your continued interest in strengthening US/Irish relations and unstinting support for #GoodFridayAgreement through #Brexit. pic.twitter.com/EnojWQ7ir9

Varadkar, who was accompanied at lunch by his partner Matt Barrett when he welcomed Pence, said the vice president was “a real friend of Ireland” whose maternal grandfather fought in the Civil War.

There were some protests against Pence’s visit. Amnesty International staged a demo outside the Dail and poet Sarah Clancy, based in Co. Clare, criticized Pence’s opposition to LGBT people and, she claimed, laws protecting them.

She was stopped by gardai at Shannon when she carried two placards protesting Pence’s visit to Ireland. The placards read “No failte for fascists” and “Queers against Pence.”

We may be few but we're here pic.twitter.com/0sNhlHi0S5

Pence’s three-day visit involved a mix of official and private engagements. He stayed at President Donald Trump’s golf resort at Doonbeg in west Clare and flew to Dublin for meetings with President Michael D. Higgins and Varadkar.

He also attended a round-table discussion with Irish and American businesspeople working in the multinational sector in Ireland at the Phoenix Park residence of the recently appointed U.S. ambassador to Ireland Edward Crawford.

On Tuesday night, he shared a private family dinner in Doonbeg at Morrissey’s, the pub and restaurant owned by his distant cousin, Hugh McNally.

Also in his party were his wife, Karen, and his sister Anne Pence Poynter. His mother, Nancy Pence Fritsch, was also in the party.

Her father, Richard Michael Cawley, immigrated to the U.S. from a townland near Tubbercurry in Co Sligo in 1923 after previously serving with the Irish Free State Army and settled in Chicago.

Pence’s decision to stay in Trump’s Doonbeg resort generated some negative headlines in Ireland and the U.S.  Pence’s chief of staff revealed that Trump suggested Doonbeg as a base, but that it wasn’t a “request” or a “command.”