Did VP Pence betray Ireland in his Brexit comments during Irish trip?

US Vice President Mike Pence offered comments regarding Brexit while at the US Ambassador to Ireland's Dublin residence on Tuesday. 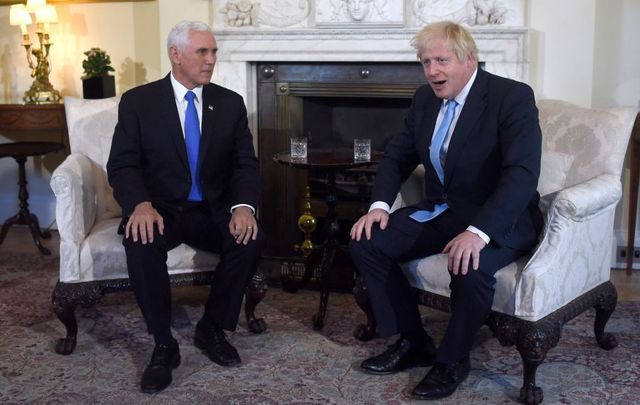 Pence made the comments during a press gaggle alongside Ambassador Crawford

US Vice President Mike Pence expressed his support for both Brexit and the Good Friday Agreement during a press gaggle at the US Ambassador to Ireland Edward Crawford's Dublin residence on Tuesday.

Pence was in Ireland for two nights this week as part of a European tour. During his time in Ireland, Pence, whose grandfather emigrated from Co Sligo to New York, met with President Michael D. Higgins, Taoiseach Leo Varadkar, Tánaiste Simon Coveney, among others.

On Tuesday, the US Vice President offered remarks during a press gaggle at Deerfield Residence in which he said: “On the subject of Brexit, we made it very clear the United States of America supports the United Kingdom’s decision to leave the European Union.

“That being said, we recognize that Ireland has unique challenges with their northern border.  And we’re absolutely determined to play a positive role in ensuring that the historic Good Friday Agreement that the United States helped to broker more than 20 years ago is preserved in the context of any Brexit agreement.

“But I did encourage Taoiseach Varadkar to convey to other leaders across the European Union some of Ireland’s unique challenges and encourage the EU to come to the table.”

The Vice President made his remarks in Dublin the same day that Prime Minister Boris Johnson suffered a disastrous first day in UK Parliament.

“I’ll be meeting in just a day or two with Prime Minister Boris Johnson, and he made very clear yesterday that he is determined to sit at the table and negotiate with the European Union.

"But I encouraged Taoiseach Varadkar to carry the message of Ireland’s unique challenges to other allies and partners in the European Union, and encourage them to come to the table, negotiate in good faith, and make it possible for all parties to achieve a Brexit that honors the sovereignty of the United Kingdom, but at the same time avoids any unnecessary disruption of commerce.”

During a questions and answers session, the Vice President was asked if he and the US would feel that a hard border would violate the Good Friday Agreement, and, if so, would it threaten US-UK trade agreements?

Pence responded: “Well, the President made very clear last week with Prime Minister Johnson that the moment Brexit is completed, we will begin immediate negotiations for a free trade agreement with the United Kingdom.

“And we remain confident, if the European Union will come to the table and negotiate in good faith with Prime Minister Johnson, we’re confident that some of these more complex issues can be addressed.

“But it’s important to understand that the deal that was negotiated by Prime Minister May was rejected by the Parliament.  And so it’s absolutely incumbent on all parties to come together and negotiate, in good faith, a Brexit agreement that respects the decision of the people of the United Kingdom to leave the European Union and do that in an orderly way.”