As Irish Americans in New York lend their support to the former mayor Michael Bloomberg we look at his track record with Irish and one particular gaffe. 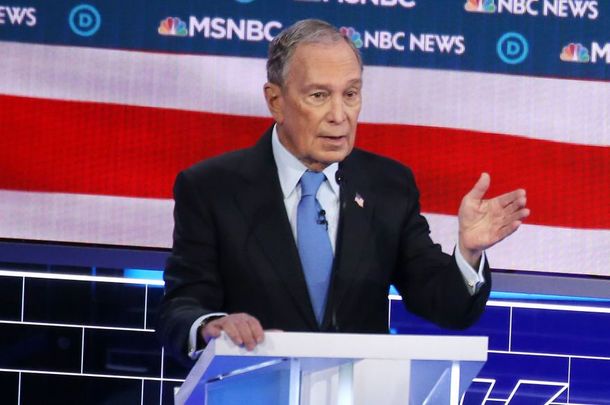 Michael Bloomberg during his first Democrat debate, on Feb 19, 2020. Getty

As Irish Americans in New York lend their support to the former mayor Michael Bloomberg we look at his track record with Irish and one particular gaffe.

Presidential dark horse Michael Bloomberg has close relationships in the Irish American community but will be most remembered for two events -- the first an unfortunate speech at the American Irish Historical Society in 2011; the second his personal appearance in Ballymote, Co. Sligo to unveil a monument to the Fighting 69th and the great American Civil War hero Michael Corcoran in 2010.

Ireland’s national monument to the Fighting 69th also serves as a tribute to the civilians who perished on 9/11 and to the soldiers of the 69th who were among the first military units to respond following the attacks, and who served in the war in Iraq.

The memorial was dedicated in August 2006 by Bloomberg and family members of Irish American victims of 9/11, including Jack Lynch, the father of Irish American firefighter Michael Lynch, who was killed during the collapse of Tower 2.

The monument consists of a copper cylinder, intertwined with steel donated from the wreckage of the World Trade Center. Etched images of Sligo native and Civil War Brigadier General Michael Corcoran, one of the commanders of the Fighting 69th, adorn the structure.

Bloomberg stated at the time, "The gallantry of the great Brigadier General Michael Corcoran is captured in the etchings emblazoned on the bronze column, but today, we focus our eyes on the foot of the memorial. There rests a piece of steel from the World Trade Centre, a symbol of the America that the Irish Brigade built and defended, and of the freedoms they secured."

Stirring words, and Bloomberg did the Irish proud by attending and unveiling the monument that day. His Irish cultural liaison and advisor, radio host Adrian Flannelly, helped pull off a remarkable day.

But another speech Bloomberg gave was notable for all the wrong reasons. In bizarre remarks delivered at a St. Patrick's parade book launch at the American Irish Historical Society in 2011 in New York, Bloomberg said he lived nearby and was used to seeing during the parade "people that are totally inebriated hanging out windows" at the society which is on Fifth Avenue.

Bloomberg's remarks drew some boos from an astonished crowd who had gathered along with that year’s parade grand marshal Mary Higgins Clark to celebrate the launch of the book entitled Celebrating 250 Years of the New York City St. Patrick's Day Parade by Irish American historian John Ridge.

The American Irish Historical Society, located at 80th Street and 5th Avenue, is one of the oldest Irish societies in America and emphasizes support for scholarship, culture, and research.  It recently won an architectural award for the best-renovated building in the city.

Board members were upset at the drunken Irish reference which falls into the usual Irish stereotype around St. Patrick's Day.

During his three terms as mayor of New York, Bloomberg cultivated close connections with the Irish American community and had strong support which made his comments all the more unexpected.

He has been a frequent visitor to Ireland and has advised on economic issues there.  He allocated funding for a children's Gaelic football field in Queens among other grants for the local Irish community led by activist Ciaran Staunton.

His reputation, bar his hiccup at the American Irish Historical Society, is rock solid. The new announcement of an Irish Americans for Mike in New York merely reaffirms that bond.