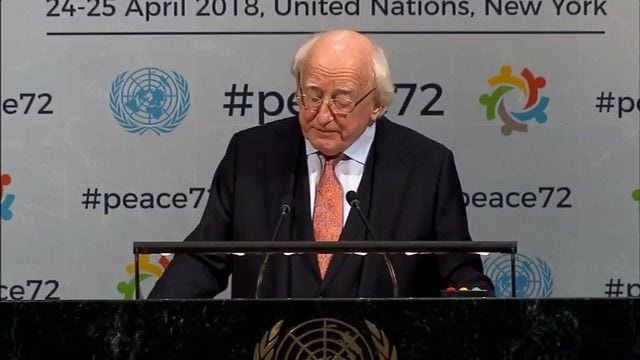 Irish President Michael D. Higgins decried the effect of wars on the world during a speech at the United Nations on Tuesday, kicking off the first day of a five-day official visit to New York.

Higgins addressed a high level UN meeting on peace-building and sustaining peace, and sharply criticized what he called the “pursuit and prosecution of war” that has left millions of citizens around the globe destitute.

Here is his speech in full:

“It is an affront to humanity that, in these first decades of the 21st century, at a time when we have the capacity to abolish all forms of human poverty, we share a planet with hundreds of millions who are, even as we speak here today, deprived of their most fundamental rights,” Higgins said.

“Is it not nothing less than a moral outrage that our boundless capacity for creativity and innovation, and the fruits of new science and technology, are turned, not to the promotion and preservation of peace, but to the pursuit and prosecution of war?

“Is it not a profound condemnation of what we have made of the legacies of culture, reason, ethics and belief systems, that we, in these first decades of the 21st century, live in a world that is home to so much war: wars that are the space now that absorb the finest minds in science and technology; wars in which civilians are more at risk than before, subject to atrocities, famine and starvation, and to an unprecedented displacement of people.”

President Michael D Higgins is delivering a speech on peacebuilding to the UN General Assembly in New York pic.twitter.com/YRBhr8Iqf8

Higgins spoke of the success of the Good Friday Agreement, but cautioned that it didn’t happen overnight and required extensive engagement from all parties that eventually agreed to its terms.

“The Northern Ireland peace agreement, signed on Good Friday 20 years ago, demonstrates some of those conditions which you [President of the UN General Assembly Miroslav Lajcák] have identified as essential for successful peace-building: direct engagement by the two governments involved in the negotiations; sustained financing for peace-building activities; strong support from the European Union; and generous and patient backing from other members of the United Nations, most particularly from those with a connection to Ireland such as the United States,” he stated.

“Yet while we celebrate the end of violence, the lives saved and the futures transformed, we are also reminded daily of the challenges of sustaining peace.”

Higgins, who is expected to run for a second presidential term later this year, ended his address by calling for a rededication to global peace.

“Let us once again, in this hall, recall the energy and bravery which animated our forebears in their best moments and devote ourselves to the cause of a universal peace, one that encompasses all of the people of our shared and vulnerable planet,” he said.

The president, accompanied on the New York visit by his wife Sabina and Irish Minister for Children and Youth Affairs Katherine Zappone, is due to spend most of Wednesday at the UN. On his agenda will be a meeting with UN Secretary General Antonio Guterres, President Lajcák and other heads of state.

On Wednesday evening Higgins will attend a concert hosted by the Irish Arts Center, and on Thursday there are two events on his public schedule: a Women in Leadership gathering hosted by the Ireland Funds at which he will highlight the achievements of Irish women in the fields of politics, business and philanthropy, and a speech at Columbia University, part of the Ivy League school’s World Leaders Forum.  The title of the president’s keynote address is Multilateralism – Towards a Discourse for Our Times.

On Friday, Higgins will meet with a number of New York-based Irish government agencies. Also on his itinerary is a trip to the New York Public Library to view the Berg Collection of Literary Artifacts, and a visit to the Tenement Museum on the Lower East Side.

Before his departure on Saturday, Higgins will travel north to Rockland and the local headquarters of the Rockland GAA, which has a full day of games and cultural events planned to mark the occasion.  The president is also due to meet with local Irish immigration groups.