Irish President looks nigh unbeatable and will be an overwhelming favorite and deservedly so. 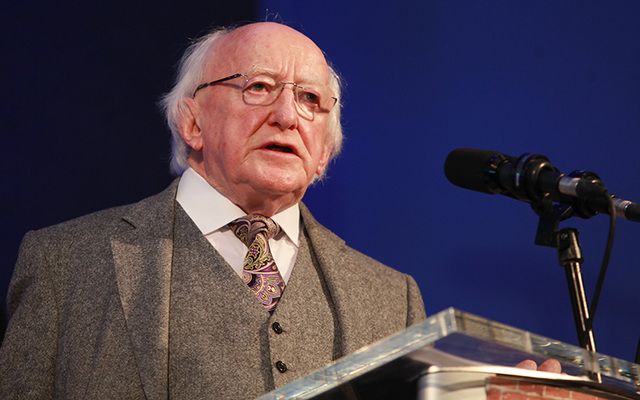 There has been a groundswell of opinion in Ireland for the unanimous re-election of current Irish President Michael D Higgins.

It is easy to see why. Higgins has been doing a remarkable job. Even this week he is traversing Western Australia replenishing the fertile roots that the Irish planted in that part of the world.

At 74, he shows no sign of slowing down. Indeed he keeps an even busier schedule than any recent president by all accounts.

Higgins is a renaissance man, a poet, author, politician and statesman, wonderfully fluent in the Irish language and easily able to hold his own on the world stage.

Incredibly he was born into abject poverty in Clare and at age five was sent away from his alcoholic father to live with relatives. From such a humble beginning he overcame tremendous adversity to become a member of the Dail and later a minister.

He and wife Sabina, in Australia for a state visit, lingered over the issue of the Famine brides, young women from Ireland essentially deported from poor houses during Famine times to provide brides for workers in Australia that were overwhelmingly male.

President Higgins and Mrs Sabina Higgins at new famine memorial in Perth to a kneeling mother keening for her lost children #StateVisitOz pic.twitter.com/2KWkIPTuL6

It is the kind of hidden history that Higgins has been superb at exposing and reminding us of -- the Irish footprint across the world.

Higgins undertook the same kind of trip to central and South America a few years back that was similarly enlightening and cast light on an unknown corner and it's Irish connections.

But it was his state visit to the United Kingdom in 2014 which was surely the highlight of his tenure in office.

Typically he did not forget the Irish who helped build Britain and created an opportunity for new immigrants who flooded in during hard times.

“Generations of Irish emigrants have made their mark on the development of this country,” he said.

“That Irish community is the living heart in the evolving British-Irish relationship. I greatly cherish how the Irish in Britain have preserved and nurtured their culture and heritage while, at the same time, making a distinctive and valued contribution.”

It was the first ever state visit by an Irish president and signaled a new compact between the two countries bitter enemies for so long.

Higgins’ speech on that occasion, his bearing and understanding of the immense importance of the visit and his words were pitch perfect.  It was a performance he has never surpassed because it was impossible too.

Strange to look back now and realize Higgins only won the presidential race when a TV celebrity (think Donald Trump) exploded in the campaign’s final days.

The job of Irish president requires gravitas, an expert knowledge of the Irish language and a sense of the broad themes of the Irish experience: war, famine, emigration, renewal.

Higgins ticks all the boxes, following in the great tradition of recent presidents such as Mary Robinson and Mary McAleese.

Whether he will have an opponent remains to be seen.  The opportunity to be in the media lens may attract one or two.

But Higgins looks nigh unbeatable and will be an overwhelming favorite and deservedly so. Whether or not he faces opponents he will be impossible to defeat.