"You might ask -- aren't they the party of venal corruption that turned a blind eye to the rape of the Irish taxpayer by rapacious bankers and corrupt developers? Well yes, but..." 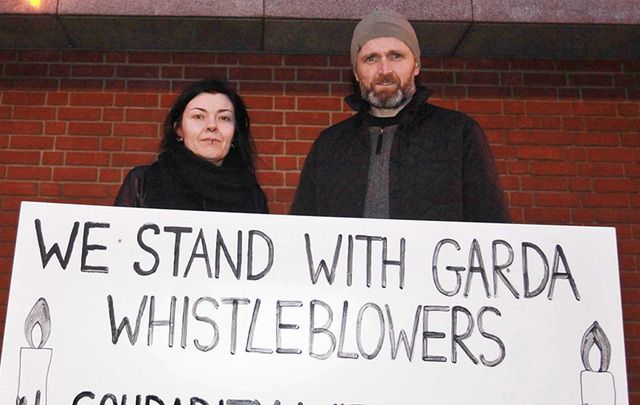 Vigils in support of whistleblower Sergeant Maurice McCabe took place across Ireland on Saturday, including this one in Finglas in Dublin.

If you think politics is a strange game in America right now, the shenanigans going on in Ireland are not far behind.

Recent opinion polls make clear that if an election were to be held there, the Fianna Fail party would steam back into power.

But wait, you might ask -- aren't they the party of venal corruption that turned a blind eye to the rape of the Irish taxpayer by rapacious bankers and corrupt developers?

The Irish taxpayer ended up with a $70 billion bill from the European Union which bailed Ireland out at the last minute.

Yes, it is the very same Fianna Fail which seems set to grab government again sometime during 2017.  Two recent opinion polls show the party 12 and eight points ahead of their main rival Fine Gael.

And you think Trump’s election was odd?

The Irish desire for self-flagellation seems to know no bounds. Of course, there is a new Fianna Fail, spanking bright and shining like a new pin.  The past is another country, and Ireland chooses not to learn from it, it seems -- right now anyway.

The current government has allowed Fianna Fail in the back door by a series of blunders reminiscent of the old Fianna Fail.

The main self-inflicted error was allowing the police force top brass to ride roughshod over the law in their efforts to silence a whistleblower.  That whistleblower, Sergeant Maurice McCabe, discovered corruption in the penalty points system doled out to drivers who had committed infractions.

In short, he discovered the police commissioner himself, among others, had availed of the opportunity to wipe out penalty points against himself.  But instead of throwing up their hands and cleaning house the cop’s top brass instead fabricated evidence that McCabe was a pedophile.

The top figures in the Irish government were perfectly aware of the accusation which had no merit at all, yet chose to ignore it, fearful of the long arm of the law.

Of course, the entire edifice has now come tumbling down, and the biggest casualty is Taoiseach Enda Kenny, now the lamest of lame ducks, struggling to stay in power an extra few weeks or months.

Ironically, it is St. Patrick's Day in the White House and his meeting with President Trump that is saving Kenny from immediate dismissal. No other putative leader of his party wants to be seen dead with the Trumpster, who matches Oliver Cromwell in popularity in Ireland.

But McCabe and the negative opinion polls have spelt the end for Kenny.  All that is absent is the obsequies and the date he is departing.

His departure will come almost directly at the same time as the beginning of the Brexit negotiations, a time when Ireland needs to be intensely focused on what the British departure from the European Union will mean for the country.

Of course they are not.  Instead are utterly focused on the palace intrigue of who will succeed Kenny, the McCabe fallout shoved to one side for the familiar guessing game.

It hardly seems to matter though, as it will be a short-lived government with Fianna Fail ready to force it from power and end the current arrangement whereby Fianna Fail do not bring down the government but abstain on motions of no confidence.

Meanwhile, the case of Sergeant McCabe will go to a public tribunal which is where I suspect the real action will be.  What emerges from that could be truly sensational as to who knew what and when they knew it.

That story may only be the beginning and is the real one to watch.