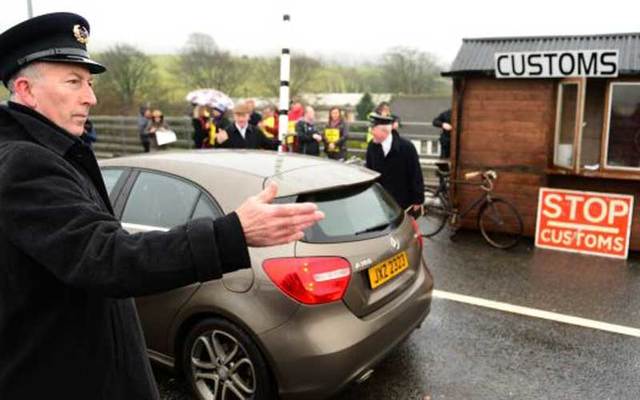 Protesters set up a mock checkpoint at the border between the Republic of Ireland and Northern Ireland on Saturday to show the potential impact of post-Brexit customs measures. Twitter/Irish Times/Photograph by Dara Mac Dónaill

Anti-Brexit demonstrators staged a mock border checkpoint on the main road between the Republic of Ireland and Northern Ireland on Saturday, bringing traffic to a crawl.

The protest, which was staged near Dundalk in Co Louth, used trucks and tractors to cause traffic delays and bring attention to the impact of predicted post-Brexit customs checks on the local economy.

The government has said that contingency work has begun to identify places where checkpoints could be established in preparation for the UK leaving the EU, The Irish Times reports.

A trailer-load of sheep going to market, passport-toting residents and a mock customs hut were all part of the staged “check point” meant to highlight the devastating impact of a border with the north.

Demonstration organizer for Border Communities Against Brexit, Declan Fearon, said: “We are really in the eye of the storm of Brexit and we intend to make sure that this does not happen.

“We never want to see this community going back to what it was before.”

Mock border officers from the UK and Ireland wearing traditional greatcoats waved down traffic as horns blared at the scene.

A Leaflet from Border Communities Against Brexit pic.twitter.com/lW4Z53h1HM

Fearon said: “The people here do not want to contemplate the reinstatement of spikes and roads being closed and of customs check points and it looks like that is where we are going.

It seems as if Theresa May and the British government have no intention of listening to us.”

He said: “They would not contemplate any assurances or guarantees that the Good Friday Agreement would not be injured or changed in any way as a result of Brexit.

“They don’t seem to have any of our interests here along the Border at heart and we want to make sure our voices are heard as far and wide as possible.”