The idea of no border after Brexit is nonsense

A hard border will likely return to Ireland after Brexit despite the government's insistence otherwise. 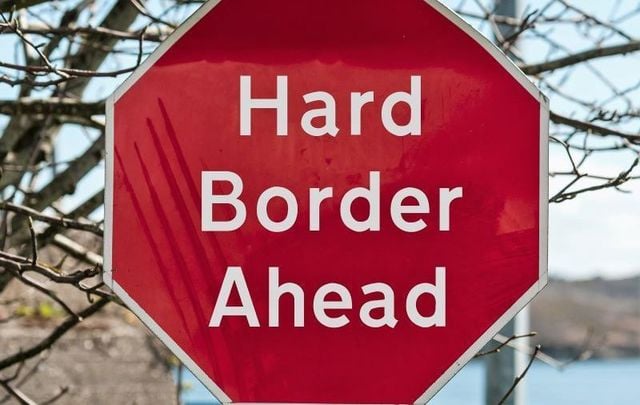 A hard border will likely return to Ireland after Brexit. Getty Images

Despite the Irish government's insistence that there can never be a border again in Ireland, that is exactly what lies ahead.

For more than two years now the Irish government has been saying over and over that whatever happens on Brexit there can never be a border in Ireland again.  It was repeated so often it became a kind of official mantra.

No hard border, no soft border, no invisible border, no cameras, no checks, no border of any kind.  Or as one over-excited politician here put it in an interview, no nothing!

Anyone who suggested that this was nonsense—as this column has been doing at regular intervals—was regarded with deep suspicion.  At best, it was letting the side down.  At worst, it was national treachery.

Instead of raising doubts, we were told we should be pulling on the green jersey and sticking to the No Border mantra.  Anything less was unpatriotic—and dangerous because it would risk the return of violence.

Again and again, Taoiseach Leo Varadkar and Minister for Foreign Affairs Simon Coveney reiterated the line that there can never, ever be a border in Ireland again in any circumstances, no matter what kind of Brexit happens.

This absolute assurance was never completely convincing, given that a no-deal Brexit was always a possibility.  But a year ago it made at least some sense.

The backstop—the guarantee that rules out a border—had been accepted by British Prime Minister Theresa May on behalf of the U.K. before the Brexit negotiations even began over two years ago.  It was written into the Withdrawal Agreement she eventually worked out with the EU a year ago.

Support for that appeared to be rock solid among EU leaders.  So why should we change our position?

The problem is we are now into a new ballgame and we have been for months. May repeatedly failed to get the withdrawal agreement through Westminster and this has led to her downfall.

Her successor (who will be announced next week) is virtually certain to be Boris Johnston, the arch-Brexiteer who says that unless the agreement is renegotiated and the backstop is dropped, Britain will leave the EU without a deal at the end of October.

If that happens—and it is now very likely—then a border is a certainty if we want to remain in the EU single market.  Despite this, the Irish government has clung to its position, endlessly repeating the no border mantra.

They have been doing so even though the writing has been on the wall for months.  Or at least they were up to last week when the idea that there might have to be some kind of border here in the future suddenly was no longer un-sayable.

Following a meeting of the Cabinet last week which discussed Brexit preparations, Coveney for the first time publicly admitted that in the event of a no-deal Brexit there would have to be a check on goods coming across the border.  He insisted that this did not mean a hard border as we used to know it.  The checks could take place elsewhere, although how or where this would be done was not explained.

And there was a vague reference to technology being used, which was a surprise since the Irish government has always rubbished the U.K. government's assertions that technological solutions could be found to the border problem.

Three government documents on the Brexit challenges we face were also published last week, which included the dire warning that a no-deal Brexit could cost us over 50,000 jobs and billions in losses to the economy.  To which one can only say, tell us something we didn't know.

Despite all its grave talk about the situation, the Irish government seemed to be as vague and uncertain about the future as they have been for the past year or more.

The one thing that was clear last week, however, was that the No Border Whatever Happens mantra had been abandoned.  Suddenly we were being told that in some circumstances, such as a no-deal Brexit, there would have to be a border of some kind somewhere.

There are two ways of looking at this about-face.  You could take the view that reality has only now started to bite the government very late in the day.

Far more likely is that they have realized for months now that their position was untenable and this is the first step in walking back what they have been saying for the last two years.  A process to soften up public opinion and readjust expectations has begun.

This should have started a long time ago.  It is exactly a year since this column warned on July 18, 2018, that our Brexit policy was unrealistic and that we were trying to have our cake (being in the EU single market) and eat it (saying there could never be a border again).

In recent weeks as it became clear that the next U.K. prime minister will be Johnson, our No Border/No Change in the Backstop stance became ridiculous. Yet until last week, the government continued to bury its head in the sand.

We can't have it both ways.  If we want to remain in the single market after Brexit then there will have to be a border here to protect the EU.

There is simply no way around that reality, and we have wasted far too much time pretending there is.  What we need to do now is focus on trying to minimize the damage.

The good news is that there are solutions.  The most obvious one is to drop or time limit the backstop which would enable Johnson to get some version of May's withdrawal agreement through Westminster.  That deal is still the best option for us since it is a soft version of Brexit which would be least damaging to the Irish economy.

Last weekend Johnson again said that the backstop has to go, and from his point of view the reason is clear.   May's solution to the backstop conundrum, written into the withdrawal agreement, was to keep all of the U.K. in alignment with the EU while a future UK-EU trading arrangement would be negotiated.

The problem for Brexiteers like Johnson is that this process could take years, and in the meantime, the U.K. would remain trapped in the EU customs union and would be unable to do trade deals with the rest of the world.

Even worse, the fact that ending the backstop has to be a mutual decision, according to the agreement, effectively gives the EU a veto on when Britain could leave the EU.  The Brexiteers believed this could trap the U.K. in the customs union for many years, possibly permanently.

That's why the withdrawal agreement was repeatedly rejected in votes in Westminster and why Johnson is determined to get rid of the backstop.  As far as he is concerned, unless that happens it would be Brexit in name only.  And if there is no movement on it, he says he will take the U.K. out of the EU without a deal on the deadline date of October 31.

So it comes down to a choice.  If we get to the end of October and we have to choose between putting a time limit on the backstop or facing the economic crisis of a no-deal Brexit, which will we pick?

There's only one answer to that really, even though it's not one anyone here will like.