The Irish government is preparing for Britain to exit the European Union without a deal at the end of October. 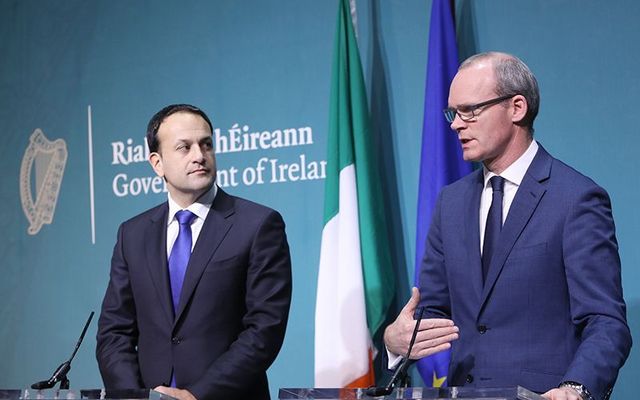 The Irish government is preparing for Britain to exit the European Union without a deal at the end of October.

Ministers received dire warnings at a Cabinet meeting on Tuesday about the realities of a no-deal Brexit, Britain’s process for exiting the EU.

In memorandums presented by Tanaiste Simon Coveney, Cabinet members discussed the implications for the border if Britain crashes out of the EU without a deal.

Coveney warned before the meeting that the chances of a disorderly Brexit have never been higher.

The government’s updated plan for dealing with a hard Brexit was due to be published later on Tuesday. It will be debated in the Dail on Wednesday and Thursday of this week before the summer adjournment.

The Irish Times said the government is increasingly concerned about how it can reconcile the twin obligations to maintain an open border on the island of Ireland while at the same time protecting the single market and customs union if Britain leaves without an agreement.

Coveney warned that Northern Ireland couldn’t be allowed to become a back door – if it remained “unguarded” – into the EU single market and customs union.

“Because if that happens then the Republic of Ireland will essentially get taken out of the single market by default and we can never allow that to happen,” he said.

The government’s contingency plan, about 100-pages long, is an update of the plan published last December before the previous Brexit deadline of March 29.  It has covered preparations in about 20 areas, including aviation, road haulage, retail, tourism, and medicines.

The readiness of ports in Dublin and Rosslare and Dublin Airport is much more comprehensive than the emergency management plan put in place for the end of March.

On Monday, the day before his Cabinet meeting, Taoiseach Leo Varadkar warned whoever is the incoming British prime minister that the backstop to protect a soft border remains a “red line” for Ireland ahead of the Brexit deadline on October 31.

The contenders for the leadership of the Conservative Party, Boris Johnson and Jeremy Hunt, have both suggested they will find alternatives to the current withdrawal agreement negotiated with the EU by outgoing British Prime Minister Theresa May but which was rejected by Parliament in London.

Varadkar noted that the two men contesting to succeed May had previously voted in favor of the deal in the House of Commons.

Varadkar added, to several ambassadors from around the world at a Global Ireland event in Dublin Castle, “The absolutely red line for us is and always has been that we have to have a legally operable, legally-binding assurance that whatever else may happen as a consequence of Brexit the re-emergence of a hard border between north and south won’t be one thing.”

He said there would be a great deal of reluctance by other EU countries towards further delaying Britain’s exit. But Ireland wouldn’t rule out an extension of time.

“From Ireland’s point of view, we’d be as facilitative to the U.K. as possible. But I think a lot of other countries have become frustrated at these rolling extensions,” he said.

Meanwhile, the Police Service of Northern Ireland has warned that dissident paramilitary groups could get an opportunity under Brexit to add new recruits to their ranks.

Assistant Chief Constable Tim Mairs told a BBC program that Britain’s expected departure from the EU at the end of October presents a recruitment “opportunity” for dissident groups like the New IRA which is blamed for the recent murder of journalist Lyra McKee as she stood behind a police cordon during rioting in Derry.

Detectives are still searching for her killer, a local believed to be in his teens.

Do you believe Ireland will be damaged by a no-deal Brexit? Let us know your thoughts on Brexit in the comments section below.