It is taking us out of objective time and reality and helping to give us cartoon leaders, cartoon politics and cartoon villains. Maybe turn it off and look up? 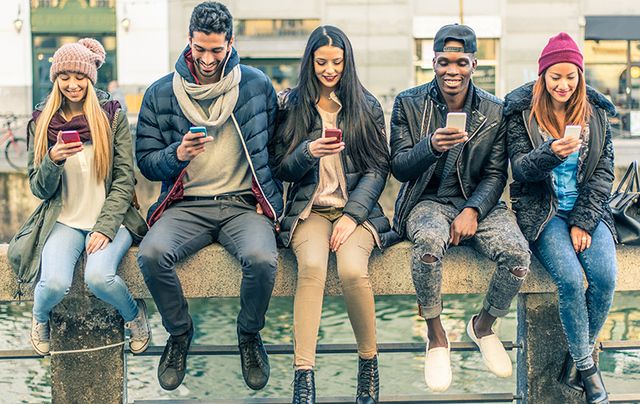 Together but absent: Eyes down, mesmerized by their phones. iStock

You see them everywhere. Doormen standing in doorways, shop workers at their registers, cops in front of stations, even bus and train drivers at the stops along their routes.

They’re all looking at their phones, taking seconds or even minutes at a time to plug in, which means they’re being lost to the real world, having tuned us out for the flickering charms of Facebook, Snapchat, Twitter or Instagram.

Somehow, without us noticing, cell phones and the Internet have become an acceptable way for people to become absent whilst still present.

They take people away from their real lives and momentarily place them in a far away cyber world, lost to the Matrix, and we can see and actually feel their disappearance.

Everyone alive must know the feeling of trying to get the attention of someone who has momentarily tuned out the real world out for the much more curated one online.

Everyone knows what it feels like to be told to be quiet and wait because the person they’re trying to speak to has got to respond to someone’s tweet or Facebook post this very moment or they’ll die.

The Internet isn’t the world. That explains it’s weird power and seductiveness. People put their best and worst faces forward online in a way they probably wouldn’t dare to in real life.

Photographs are manipulated and Photoshopped, images are filtered, speeches are edited, so what you’re getting is not what is objectively real.  It’s mostly what the other person wants you to see.

It’s reached epidemic proportions, this lost to the wider world screen gazing. Take a train, a plane or a bus and the first thing you’ll notice is how everyone is mostly focusing on something that is happening far from where they happen to be in the given moment. That’s because, for a lot of people, the siren call of the online world can feel much more rewarding than the voices they hear around them in the real world.

We’re crazy if we don’t think this massive change in public behavior hasn’t changed the world already. What has happened is that we have given new forums to the entertaining.

People who make us laugh or make us angry, people who know how to capture our attention and hold it, they’re the ones who thrive online in a way they cannot in the real world.

Twitter is unarguably responsible for the rise of Donald Trump, and interestingly it also responsible for his fall. It’s an online Roman Coliseum of likes and retweets that is having demonstrable, real world impact on his presidency and agenda.

Many people have already noted there is something cartoonish about Trump’s persona. He’s less of a person and more of an Internet meme.  He someone’s idea of an authoritarian strong man, one who already speaks in sentences of 140 characters or less.

Trump rose by crafting messages that could be contained in a single tweet. On the economy, on health care, on immigration, on security, he crafted sound bites that shone hard and clear as diamonds and the Internet loved it.

Trump is our first Twitter president. He doesn’t do nearly so well in the real world. That will continue to define him.

Sadly, along with people showing you their best online, we also have a generation determined to show us their worst. From homegrown Alt Right white supremacists to neo-Nazis to ISIS, these terror groups have all learned how to turn themselves into the kind of giant cartoon that the wider world wants to watch.

When the suicide bomber attacked the Ariana Grande concert-goers in Manchester on Monday night, bug-eyed commentators online were already calling it a False Flag operation to secure a victory for the Conservative party, who had been in freefall in the polls.

This is nuts of course. But the Internet can take people away from objective reality and gives them a new one that feels almost as real.

The Internet distorts and magnifies real life in other words. It makes fringe discussions and theories mainstream.  It even results in White House press credentials for whack job conspiracy websites like InforWars.

But now it is taking us out of objective time and reality and helping to give us cartoon leaders, cartoon politics and cartoon villains.

So it’s time to have a serious discussion about the Internet’s dangers and shortcomings. After all, everyone knows that an hour spent exclusively online can make you feel like you’ve eaten three hamburgers.

That’s because you’re feeding one hunger and ignoring all the others. Maybe turn it off and look up?