Manchester: The kids who will never come home

What for? ISIS bomb Ariana Grande concert of teens and music lovers killing at least 22. 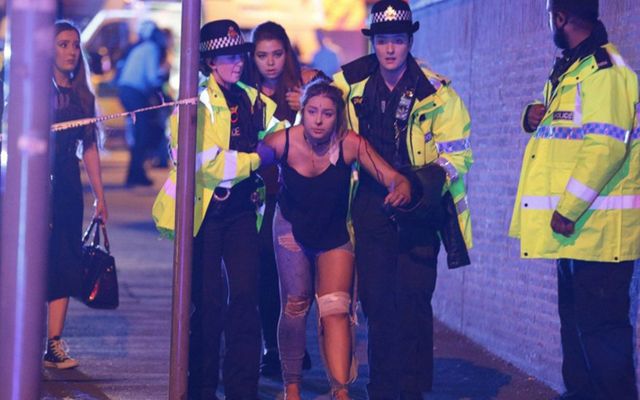 My 17-year-old recently went to an Ariana Grande concert at Madison Square Garden with a friend.

She went and came home without any fuss. It hardly cost her parents a thought.

I can only imagine what the poor parents who are waiting desperately for news of their loved ones in Manchester are going through.

They, too, said goodbye to their children, on their way to hear the former Nickelodeon star, beloved by the young teen set.

Could there have been anything more innocent?

Can there be any worse fate?

At least 23 families we know will never see their loved ones again.

Chances are they're mostly young girls as those tend to be Ariana Grande's biggest fans.

EVERYONE PLEASE RETWEET THIS HELP ME! MY SISTER WENT TO THE CONCERT TONIGHT NOW WE CANT FIND HER PLEASE #Manchester #DWTManchester pic.twitter.com/cgtUoz5pBe

Lurking among them was a suicide bomber, right outside the venue police report.

Explosives strapped to his chest, hate in his heart, death on his mind.

What for? The 40 virgins he will find waiting in Valhalla?

What a sick, perverted, bastardly thing to do.

He must have strapped on that bomb knowing he was going to blow young and innocent people apart.

Not combatants, not even adults I presume, but mostly teenagers.

No bravery there, only perversion and a black hole for a heart.

Freedom isn't free, as the old US Army motto goes. People die for it.

We pay for open societies, for refusing to retreat into cocoons of safety.

We pay for enjoying our culture, our arts, our enjoyment.

broken.
from the bottom of my heart, i am so so sorry. i don't have words.

To the French massacres, at Bataclan theater and in the rest of Paris and Nice, we add Manchester.

All innocents on a night out.

What drives people into the arms of ISIS?

No matter how much hate, how much frustration exists in your life what level of depravity makes you strap on a suicide bomb?

There are 22 innocents dead as you also died for your mad ambitions.

May you rot in hell.

Suicide blast at a concert in #Manchester kills at least 22. More: https://t.co/5M000Qk2Fu via @ReutersTV pic.twitter.com/ZUZ3XwUAVk