Dumping Phil Hogan from EU Commission was a huge mistake

John Spain argues that Phil Hogan's resignation in the midst of Brexit could not have come at a worse time. 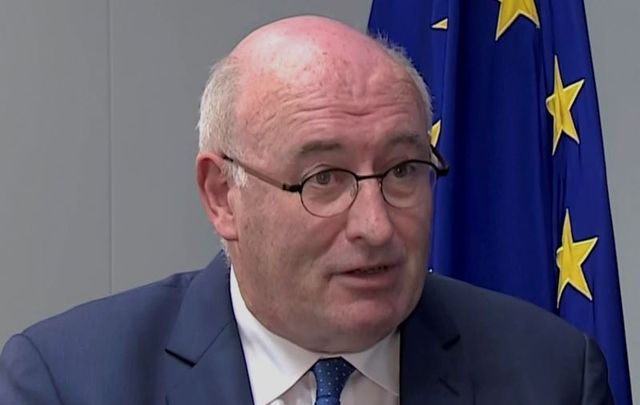 August 25, 2020: Phil Hogan appears in an interview with RTE News the day before he formally resigned from his role as EU Commissioner for Trade in the wake of Ireland's 'Golfgate' scandal. RollingNews.ie

Phil Hogan resigned from his role of EU Commissioner for Trade on August 26 in the wake of Ireland's so-called 'Golfgate' scandal.

The past few days have seen a growing realization here that hounding our EU Commissioner Phil Hogan out of office last week might not have been so clever after all.

With a likely hard Brexit just months away, the man who might have been able to mitigate the catastrophic damage that will cause to Ireland has been dumped. We have shot ourselves in the foot.

Of course, Hogan was wrong to have attended the golf dinner in the west of Ireland that broke Covid rules. And he was wrong to have been somewhat casual in his observation of the virus guidelines during his working holiday visit here. But it's easy for the rest of us to be wiser and holier than thou in retrospect.

What was portrayed last week as outrageous and arrogant behavior probably did not seem so to him at the time, particularly since he had a negative test for Covid five days after he arrived here.

The main reason he got into trouble was that he felt free to move around Ireland after his negative test. But the rule is that if you arrive from a nongreen list country like Belgium (Hogan flew in from Brussels), you have to isolate for 14 days whether you have a negative test here or not -- the reason is that if you have the virus it can take up to 14 days before you show symptoms.

This is just one example of how confusing the rules here are. If someone who lives here has contact with a virus-infected person and subsequently has a negative test, the rule is that they are then immediately free to move around without having to isolate for 14 days.

Obviously that does not make sense. And the virus does not care whether you are from Brussels or Bantry. So Hogan was guilty of disobeying the rule, but the Irish government is guilty of putting out contradictory instructions.

In relation to the now infamous golf dinner, Hogan said he had relied on the organizers to make sure the event was compliant with restrictions. You can see that as buck passing or entirely reasonable.

Having realized that was inadequate, he admitted his mistake and apologized. He also apologized for other shortcomings in his behavior during his time here.

The public apology he gave should have ended the controversy. But it was not enough for the media and the politicians here who fanned the flames into a national hysteria. Every minute of Hogan's visit here and every aspect of his movements were put under the microscope in a witch hunt for inconsistencies that could be turned into a hanging noose.

The media feeding frenzy was relentless, day after day. And the politicians chimed in as well, anxious to be seen to be in tune with the public anger.

But how many of those journalists, politicians, and ordinary citizens who were screaming for Hogan's head last week are perfect in their own Covid behavior? Are we supposed to believe they never forgot their face mask when going for a coffee or nipping into a store for "just for a few things." Or never breached social distance or exceeded restrictions on meetings with friends or ignored travel limits?

It is now six months since the first Covid case in Ireland. We're all doing our best to cope with the economic disruption and the ongoing restrictions on our daily lives, the most limiting in Europe.

But the truth is no one is perfect and almost everyone has broken the rules at some point with the excuse that "I'm being extra careful, but I just have to do this, it's an exception, etc."

That golf dinner should not have taken place, as Hogan and others who were there now admit. But it was not just the fact that it was a dinner for 81 guests that enraged people here. It was more because of who the 81 were -- mainly politicians, the very people who are telling the rest of us to follow the rules.

That revived memories of the famous Galway tent era during the boom, when politicians, developers, and top business people would mingle in the Fianna Fáil marquee at the Galway Races every year. Projects would be promoted, understandings reached, and the party coffers would swell. The Golden Circle ran the country and the rules were for the ordinary people.

But apart from also taking place in Galway, there was no comparison between this parliamentary golf dinner and the Golden Circle era. Yes, the commissioner was at the dinner, as was a Supreme Court judge. But only one government minister was there and he was a local.

The rest of the guests were retired politicians, minor political figures from years ago, and those who had failed to get elected to the Dáil. As one commentator here said, it was a collection of political "old farts."

So the public outrage based on the belief that this was an elite gathering ignoring the rules that everyone else has to follow was misplaced. This was a collection of political nobodies with zero influence in the corridors of power, not a golden circle elite.

The anger and hyper judgementalism that swept the country last week was also fueled by public fatigue with the ongoing Covid restrictions rather than just by the golf dinner and Hogan's behavior. Whatever the reason, the result was predictable. With no end to the media hysteria in sight and no political backing, he bowed to the pressure and resigned.

Now, several days later, we are starting to come to terms with what we have done. It's a bit like waking up the morning after a night of over-indulgence and realizing we have made a serious mistake. We have bitten off our nose to spite our face.

Hogan, widely known as Big Phil, was a politician of stature not just because of his physical size. He was a formidable operator, first in Irish politics, and more recently as EU commissioner.

As agriculture commissioner from 2015, among other significant wins, he finalized trade deals between Europe and Japan and the Mercosur countries in South America, a difficult balancing act given the competing interests involved and the sensitivities of farmers.

Because of those achievements he was given the trade commissioner role in the current EU Commission by its president, Ursula von der Leyen. At a critical time for the EU because of Brexit and developments in world trade due to pressure from the U.S., this was the most important role in the commission.

His appointment was a significant boost for Ireland's profile. And he immediately got busy, initiating a wide review of EU trade policy and pushing forward negotiations with China and the U.S.

In spite of the difficulties in dealing with the Trump administration, he completed an initial trade deal with the U.S., ironically one that was signed while he was on his working holiday in Ireland. This was limited in scale -- although it has fishermen here up in arms over increased lobster imports from the U.S. and EU farmers worried about soya imports from the U.S. -- but it was a good start, and his relationship with U.S. Trade Ambassador Robert Lighthizer promised more progress in the future.

So Hogan was the heavy hitter in the commission and a proven dealmaker, someone von der Leyen relied on and admired. The domestic uproar in Ireland which caused his resignation last week was the last thing she needed at this critical time.

You can be sure that she is far from impressed by the hysteria in Ireland and by the failure of the Irish government to protect Hogan. They could have done that even while severely admonishing him for his careless behavior here. Instead, the government turned on him to curry favor with the public.

Because of that, it is virtually certain that von der Leyen won't be giving the trade role to whoever the government here nominates as Hogan's successor. Various names have been mentioned but none of them has the necessary political clout, with the single exception of Foreign Affairs Minister Simon Coveney.

Whoever is given the nod as our new commissioner is likely to be put in charge of paper clips after a reshuffle by the von der Leyen. And who could blame her?

Hogan is far from guiltless in all of this, of course. His hubris and his failure to treat the Covid restrictions here with enough respect played a major part in his downfall.

But there is a bigger picture. With a hard Brexit fast approaching, Ireland is in a perilous situation and his power and prestige as trade commissioner could have helped us get through what lies ahead.

It is true that all commissioners on appointment swear to act in the EU interest rather than the interest of their home country. And it is true that Michel Barnier leads the Brexit negotiations for the EU and reports directly to von der Leyen.

But Hogan was a very influential voice at commission meetings and obviously would have been very aware of Brexit developments that would have a nightmare outcome in Ireland.

We have lost that voice. And it could not be at a worse time.