More than 80 people attended an Oireachtas Golf Society event in Co Galway just a day after coronavirus restrictions were tightened across Ireland. 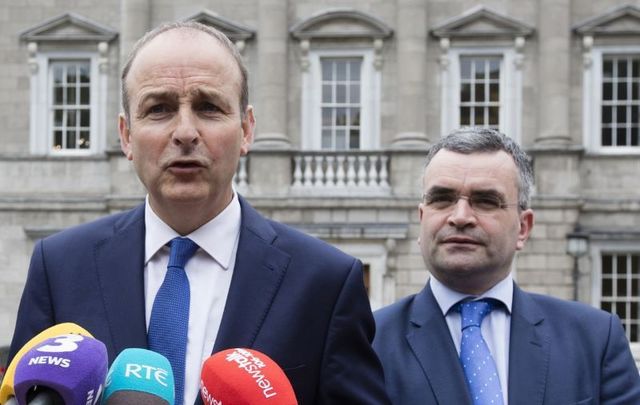 The Oireachtas Golf Society dinner at The Station House Hotel in Co Galway saw more than 80 people, many of them politicians, gather despite coronavirus restrictions.

The Irish government was forced to reckon with a news story that broke late on Thursday, August 20 that dozens of people, many of whom are politicians, attended an event for the Oireachtas Golf Society at The Station House Hotel in Co Galway on Wednesday, August 19.

The story was broken late in the day on Thursday, August 20 by Aoife-Grace Moore of the Irish Examiner. Moore wrote: “More than 80 people, including the Agriculture Minister, senators, and TDs attended a golf function in a hotel just a day after the Government announced new lockdown measures to stop the spread of Covid-19.”

Breaking: The Minister for Agriculture and a number of senators attended an 81 person Oireachtas Golf Society anniversary event the day after the government announced new guidelines for functions. Story by me and @PTHosford https://t.co/tAu5L5OzDF

The event was hosted on August 19, just a day after the Irish government announced the “significant tightening” of the country’s coronavirus restrictions. Counties Kildare, Laois, and Offaly had been under their own set of restrictions since August 7 amid a “localized outbreak” of coronavirus.

As part of the "tightening" of restrictions, Taoiseach Micheál Martin announced on August 18: “All visits to homes will be limited to six people from outside the home and from no more than three households, both indoors and outdoors,” and “Outdoor gatherings will be limited to 15 people.”

The event on Wednesday, August 19 was hosted at The Station House Hotel in Clifden, Co Galway, and was organized by the Oireachtas Golf Society to celebrate the group's 50th anniversary and to honor former Fianna Fáil MEP Mark Killilea Jr, who died in 2018.

A spokesperson for the hotel told The Irish Examiner after the event: "My understanding of dining arrangements is that in any dining room it has to be fewer than 50.

"It's not a Mickey Mouse partition, it's a proper physical structure that divides two rooms, but it can be removed.

“It was booked a few months ago, the guidelines were going to change 50 up to 100 but didn't, so we spoke to the Oireachtas Golf Society, and the Irish Hotel Federation (IHF), and we were told that as long as there were no more than 50 diners, it was safe.”

The Irish Examiner says IHF said in an email to its members on Wednesday: "Further to the Government announcement yesterday in relation to further Covid-19 restrictions, the Department of Tourism has not yet received any guidance on the changes as of this morning.

"Therefore, the status quo remains in terms of current operational procedures for hotels until further notice."

On Friday, August 21, Taoiseach Micheál Martin announced in a statement that he had accepted the resignation of Dara Calleary, Ireland’s Minister for Agriculture, who was in attendance at Wednesday's event.

In his statement, Martin said in part: “People all over the country have made very difficult, personal sacrifices in their family lives and in their businesses to comply with Covid regulations. This event should not have gone ahead in the manner it did given the Government decision of last Tuesday.”

Calleary’s resignation came the morning after he tweeted an apology for attending the event:

We are asking quite a lot from everyone at this difficult time. I also offer this apology and my sincere regret to my government colleagues 2/2

As the news of the event spread, gardai announced on August 21 in a statement that an investigation had been launched: "An Garda Síochána is investigating an event that was held in Co. Galway on the 19th August, 2020 into alleged breaches of The Health Act 1947 (Section 31A-Temporary Restrictions) (COVID-19) (No.3) Regulations 2020, as amended.

"As this is an active investigation An Garda Síochána has no further comment."

The Ceann Comhairle (the speaker of Dáil Éireann), Seán Ó Fearghaíl, said in a letter to the Secretary of the Golf Society that while the group is independent from the Oireachtas, “the society as it is currently structured and named be wound up as a matter of urgency.”

He added: “The event has seriously undermined and damaged public confidence in the Oireachtas and in what I hope is our mutual commitment to public health and to the people we serve.”

Independent TD for Galway West Noel Grealish, who attended Wednesday's event as captain of the Oireachtas Golf Society, said in a statement to Galway Bay FM that he sat at a table with six people and exercised social distancing.

He insisted that he was assured the event met the new public health guidelines but admits now that there was an error of judgment.

TD Grealish added that he "sincerely and unreservedly apologizes."

Seamus Woulfe, a Supreme Court judge and Ireland's former Attorney General, said in a statement: “My understanding was that the organisers and the hotel had satisfied themselves that they would be operating within Government public health guidelines.

“I attended based on that understanding, that it would be within the guidelines, but do apologise for any unintentional breach of any of the new guidelines on my part.

“That I ended up in a situation where breaches may have occurred, is of great regret to me, and for which I am sorry. I unreservedly apologise.”

Fianna Fáil announced on Friday that the party whip had been removed from three senators - Paul Daly, Aidan Davitt, and Niall Blaney - who attended the event in Co Galway:

The Party whip has been removed from the three Fianna Fáil Senators who attended the recent Oireachtas Golf society event.

2) Prior to the event, I had complied fully with the government’s quarantine requirements, having been in Ireland since late July.

Fianna Fail Senator Aidan Davitt said: “In light of the updated public health advice issued on Tuesday, I should not have attended this dinner.

“I genuinely apologise unreservedly for this error of judgment.”

Senator Niall Blaney said: "I am sincerely sorry for this error in judgement and apologise unreservedly.

“I am very conscious of the enormous effort by people to battle this virus and keep everyone safe. My attendance was therefore wrong and I apologise.”

Tanaiste Leo Varadkar, of Fine Gael, said in a tweet: “The event organised by the Oireachtas Golf Society should not have happened.”

The event organised by the Oireachtas Golf Society should not have happened. I understand how extremely difficult the restrictions have been for people and the enormous sacrifices we have all made

Varadkar added that he has removed the party whip from Senators Jerry Buttimer, Paddy Burke, and John Cummins. Senator Jerry Buttimer additionally resigned his position as Leas-Chathaoirleach (Vice Chairperson) of the Seanad.

In recognition of the seriousness of this matter, I have removed the party whip from Senators Jerry Buttimer, Paddy Burke and John Cummins. Senator Jerry Buttimer has also resigned his position as Leas-Chathaoirleach of the Seanad.

Senator Paddy Burke of Fine Gael shared a statement with the Connacht Telegraph: "I attended a function on Wednesday night. The function had been moved from the golf clubhouse to comply with public health guidelines.

"I now realise this was an error of judgement on my behalf and I apologise for that."

Senator John Cummins said: “I have been so careful in adhering to the public health advice since the start of Covid-19,” he said.

“This was a lapse of judgement on my part which I genuinely apologise unreservedly for.”

Phil Hogan, the EU's Commissioner for Trade and a member of Fine Gael, issued a statement clarifying his attendance at the event, but fell short of apologizing:

2) Prior to the event, I had complied fully with the government’s quarantine requirements, having been in Ireland since late July.