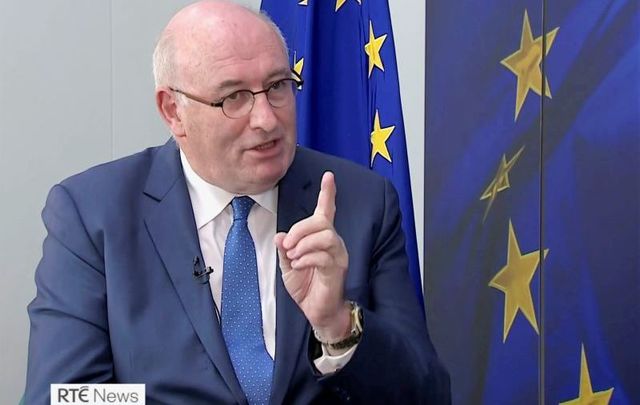 Phil Hogan insists he "put nobody at risk" with his movements around Ireland after testing negatively for COVID-19.

Phil Hogan, the Irish European Commissioner for Trade, has issued a memorandum at the request of Ursula von der Leyen, the President of the European Commission, detailing his movements over the past month and his attendance at the Oireachtas Golf Society dinner in Co Galway on August 18.

The memo comes at the request of European Commissioner Ursula von der Leyen following days of uproar in the wake of Ireland’s “Golfgate” scandal that saw about 80 people, including Hogan, attend the Oireachtas Golf Society event at the Station House Hotel in Clifden, Co Galway on August 19.

The event was hosted just a day after Taoiseach Micheal Martin announced the “significant tightening” of coronavirus restrictions across Ireland.

In his memorandum, issued on August 25, Hogan provided a timeline of his movements between July 31, when he arrived in Ireland from Brussels, and August 22, the day he returned to Brussels. Hogan outlines travel between his Kildare, where he has a temporary residence,  Dublin, Kilkenny, Galway, and Limerick in this period.

Counties Kildare, Laois, and Offaly were placed on a separate lockdown from the rest of the country which went into effect at midnight on August 7. The lockdown was lifted for Counties Laois and Offaly but extended for Co Kildare on August 21.

In his memorandum, Hogan writes: “When in Kildare, I was either moving through the County or momentarily there with a reasonable excuse and consequently I was not in breach of the Covid-19 restrictions imposed.”

On August 21, Hogan attempted to clarify his attendance at the event in a statement on Twitter: “I attended the Oireachtas Golf Society dinner on Wednesday on the clear understanding that the organisers and the hotel concerned had been assured [by the Irish Hotels’ Federation] that the arrangements put in place would be in compliance with the government’s guidelines.

“Prior to the event, I had complied fully with the government’s quarantine requirements, having been in Ireland since late July.”

The next day, on August 23, Hogan apologized for attending the event in a string of tweets. He said in part: “I acknowledge that the issue is far bigger than compliance with rules and regulations and adherence to legalities and procedures. All of us must display solidarity as we try to stamp out this common plague.”

1) I wish to apologise fully and unreservedly for attending the Oireachtas golf society dinner on Wednesday night last.

On Tuesday, a spokesperson for the European Commission said that President von der Leyen had set a deadline for 1 pm Irish time for Hogan to provide follow-up details about his movements in Ireland and in what context they occurred. The spokesperson also reportedly said that President von der Leyen was keen to see Hogan give media interviews in hopes of achieving more transparency:

Von Der Leyen, through a spokesperson, again says she has encouraged Hogan to give media interviews or a public appearance in which he accounts for his movements. For second day in row, she says she is "confident" Hogan will make himself available.

Later on Tuesday, Hogan appeared in an RTE News interview with reporter Tony Connelly. In the interview, Hogan says he "made a mistake” attending the Oireachtas Golf Society event but insists he followed proper self-isolation protocol after testing negative for COVID-19 on August 5.

"It wasn't appropriate for me to be attending," Hogan told Connolly of the Oireachtas Golf Society event, "and I made a big mistake by doing that and it's a very big embarrassment and I've apologized for doing so."

He later said: "I didn't put anybody at risk because I had already been tested for COVID-19 and it was clear."

You can watch the interview here:

EU Commissioner Phil Hogan speaks to @tconnellyRTE about the controversy surrounding the golf dinner in Clifden, and the fallout | More: https://t.co/RE6IbDVbN0 https://t.co/yyEHWFxo75